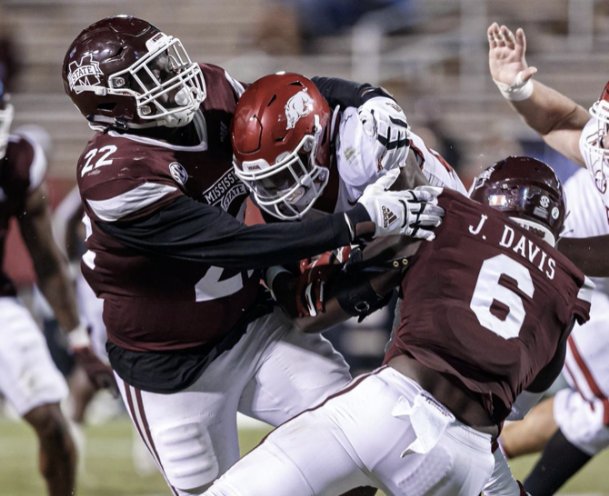 Nathan Pickering (center) is the third Mississippi State player to opt out of the season mid-year. Photo by: MSU Athletics

STARKVILLE -- Mississippi State is down another body.

Sophomore defensive tackle Nathan Pickering announced Wednesday via Twitter that he would be opting out of the rest of the 2020 campaign, becoming the second player to do so in as many weeks.

"I love Mississippi State University and all the people surrounding it," Pickering wrote. "There's not a school I (would) rather play for. God has a plan for everything. This is not about transferring, but something I have to do. That being said I will be opting out of the 2020 season!"

In five games this season, the Mount Olive native recorded 16 tackles, two sacks and a quarterback hurry. During his inaugural season in Starkville, Pickering was named to the 2019 Southeastern Conference All-Freshman team.

With Wednesday's announcement, Pickering joins star running back and Columbus native Kylin Hill and starting safety and West Point product Marcus Murphy as the three Bulldogs to have opted out of the season mid-year. Junior cornerback Tyler Williams and walk-on receiver Taury Dixon also did so prior to the start of the year.

MSU has also seen a slew of changeover on its roster over the past month and a half. Since October 1, seven players have left the program for varying reasons, including Alabama transfer receiver Tyrell Shavers, running back Kareem Walker and quarterbacks Garrett Shrader and Jalen Mayden.

The Bulldogs were unable to play their scheduled game against No. 23 Auburn last week due to COVID-19 positive tests and contact tracing. That game has been rescheduled for Dec. 12.

MSU is slated to play No. 13 Georgia on Saturday, but it remains up in the air whether the maroon and white-clad Bulldogs will have enough players to satisfy the SEC's 53 scholarship player threshold required to partake in competition this year.