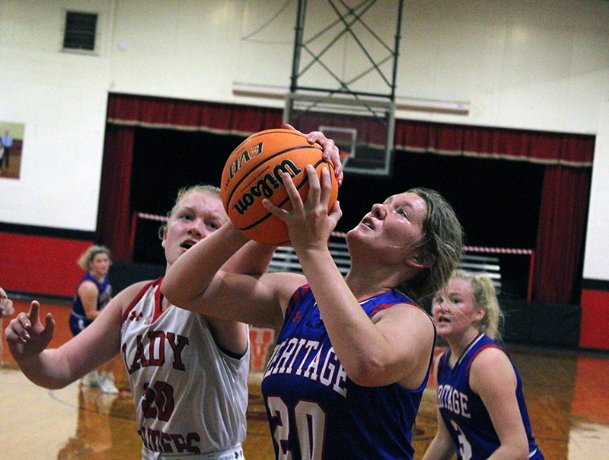 WEST POINT -- Collin Adair tiptoed the right sideline to catch the pass, narrowly managing to avoid stepping out as he brought the basketball safely back into play.

His acrobatic save wasn't the only tightrope act the Heritage Academy boys basketball team needed to maintain a long, tenuous possession early in the third quarter of Tuesday's game at Oak Hill Academy in West Point. Fellow sophomore Mack Howard leapt a couple feet in the air to catch a pass; Adair sprinted to the elbow to grab another.

After nearly a minute, what Patriots coach Russ Whiteside called "sloppy" play by his team yielded results. Howard slipped free for an open layup, and Heritage Academy scored for the first time in the second half.

The possession neatly encapsulated the Pats' play in their 53-39 win over the Raiders in Tuesday's season opener: sloppy, sure, but certainly good enough.

"I was really pleased," Whiteside said. "I think we came out with pretty high energy. I thought we played with a lot of effort -- especially in the first half."

For the Patriots coach, it truly was more a tale of two halves than anything. Heritage Academy roared out of the gate early on, as Howard hit a 3-pointer to extend the lead to nine points before Oak Hill (2-2) had even gotten on the scoreboard. The Patriots rode that momentum into a 39-21 lead at the break.

"We came out flat," Oak Hill coach Andrew Howell said. "We talked about it in the locker room: That run they had in the first quarter was the difference. They came out and played harder than we did."

While the Raiders fought back, closing the gap to nine points early in the fourth quarter, their coach said he would have liked to see more effort come before it was too late to make a difference.

The Patriots, meanwhile, know they have plenty of time to work on delivering the knockout blow on which they couldn't connect Tuesday. With football occupying several Heritage Academy players until Friday's loss in the MAIS Class 5A semifinals, Heritage Academy's hoops team has barely had time to get on the court.

"It's just the beginning of basketball season," sophomore big man Trey Naugher said. "We've only had one practice, so we haven't had that much."

Even so, after losing a nine-man senior class, the Patriots feel good about how their season started Tuesday.

"What?" Wooten yelped, surprised, from the Raiders' bench. She looked up at the scoreboard for verification, then shook her head in apparent disbelief.

Still, there was a hint of a smile on her face.

Fouling out was of little concern to Wooten and Oak Hill against Heritage Academy on Tuesday, after all, as the Raiders beat the Patriots 51-41.

Wooten had 12 points as Oak Hill improved to 4-1 in its first season under head coach Terry Walters. Briggs led the Raiders with 17 points.

"Mary Beth had one of her good games," Walters said. "She has good and bad games, but she's only a sophomore, so she'll get better as the year goes on."

A 10-0 run in the second quarter put the Raiders in the lead for good and sent the Patriots to their third defeat in as many games. Turnovers all evening and poor foul shooting -- the Pats missed eight free throws in the fourth quarter alone -- cost Heritage Academy a chance to fight back.

"I can tell that we've still got a lot of work to do as far as getting in shape, getting our legs under us," said Patriots coach Miriam "Moe" Reed, who pointed to her team's trouble from the line late in the game as a sign of fatigue.

And it's understandable: Heritage Academy is a young team with just one senior, Sara Kate Thompson, who didn't play basketball last year and played sparingly Tuesday. Freshman Reagan Merchant, who had 15 points, was relied on heavily; sophomore Lucy Sharp, who led the team with 18, continued to improve her game. Sharp hit from midrange consistently and even knocked down a 3-pointer in the second quarter.

"She's really added a whole 'nother dimension to her game with her outside shooting," Reed said. "The summer did a lot of good for her as far as just gaining confidence. She's having to play a whole different role this year. We really look for her to score a lot more, work for more opportunities. She's not just a down-low player anymore; she's not just a post player for us. She's somebody who's got to step out and hit those outside shots."

Heritage Academy's next game is Thursday against Magnolia Heights in Columbus, while Oak Hill will host Kirk Academy in a rematch of a road win earlier this season in Grenada.

Marin Shy added 15 points for the Volunteers. Caroline Wood had 10, and Fallon Parker had nine.

The Volunteers will host Choctaw County on Thursday.

Nicole Padron had the lone goal for the Trojans.

New Hope's next match is Thursday at Tupelo.

The Mississippi School for Mathematics and Science girls fell short against Vardaman in Tuesday's home match.

Senior Ashley Mangus scored off a corner kick, but the Blue Waves lost 2-1.

Destin Poindexter had a hat trick for the Columbus High boys in a 5-1 home win over Winona on Tuesday.

Keylan Payne and Tony Marquez added goals for the Falcons.

Wilkes Stubbs had the only goal of the match.

The Volunteers will host Bayou Academy on Thursday.

Caledonia will play at Tupelo on Friday.

NEW HOPE -- Trey Parnell had a hat trick in New Hope's 6-0 rout of Mooreville on Tuesday.

Jose Castillo and Brant Smith added goals for the Trojans.

Conner named Region 1-5A athlete of the year

Columbus High School senior Ethan Conner was named the football Region 1-5A athlete of the year.