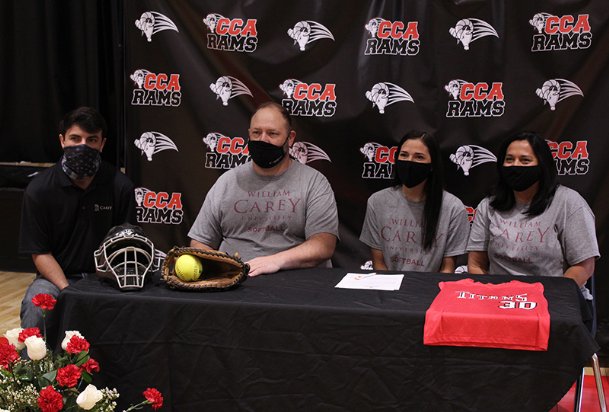 Columbus Christian Academy senior CC DeVos (second from right) signed her letter of intent to play softball at William Carey University on Tuesday. DeVos was joined by her brother Christian and her parents John and Joy. Photo by: Theo DeRosa/Dispatch Staff

STEENS -- At a softball tournament in eighth grade, CC DeVos tried a new position for the first time.

Ever since then, DeVos -- now a senior at Columbus Christian Academy -- has never wanted to stop catching, even when a serious injury threatened to force the issue.

Now, William Carey University will give DeVos a chance to keep playing the position she has come to love.

On Tuesday morning in front of friends and family in Columbus Christian's gym, DeVos signed her national letter of intent to play softball at the college in Hattiesburg.

"It means a lot with how far I've come," DeVos said.

In 2018, DeVos tore her ACL and MCL running to first base and had surgery to reconstruct the ligament. She was told she'd probably never be able to catch again and that she'd probably end up having to move to the outfield.

"Whenever I was told that, I was really determined to come back stronger than I was," DeVos said.

It took a year before she could get back on the field and another two months before she got back to catching. And just like DeVos did, William Carey coach Craig Fletcher kept the faith.

"He told me that he wasn't going to stop fighting," DeVos said. "Sure enough, after my injury and after I was back playing, he was still there watching me."

Since Columbus Christian doesn't field a high school softball team, DeVos has played travel ball for the Tuscaloosa (Alabama) Titans. At a game with the Titans, DeVos met Fletcher, who extolled William Carey's virtues. DeVos visited campus and loved it. William Carey became No. 1 on her list.

And when Fletcher made it clear the Crusaders would allow DeVos to catch in college, the decision was obvious.

"When William Carey talked to me and they stuck with me after my injury, I knew that was the school I wanted to choose," DeVos said.

Two weeks before her senior year started, DeVos had surgery to remove a screw that was inserted as part of the initial reconstruction as well as a cyst that was forming. The procedure "helped a ton," she said.

DeVos was able to compete in fall ball, which just wrapped up, and she plans to play "here and there" in summer ball before heading to Hattiesburg. She'll major in criminology and continue her catching career with the Crusaders.

"All my friends and family supported me through it all," DeVos said.