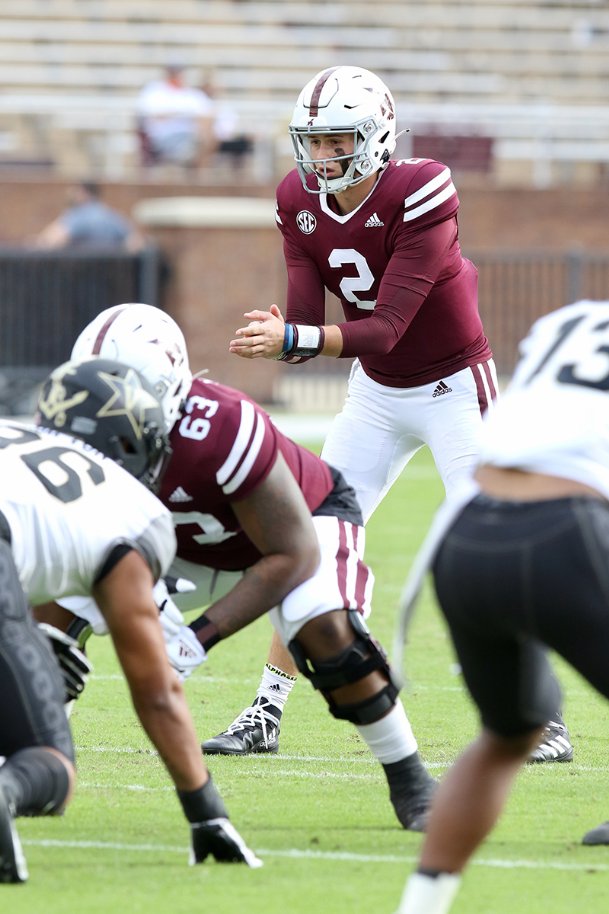 It remains unclear who will line up under center this weekend for MSU between Stanford import K.J. Costello and Will Rogers. Rogers started the Bulldogsâ last contest against Vanderbilt two weeks ago. Photo by: Mississippi State athletics

STARKVILLE -- Mississippi State earned a much-needed win against Vanderbilt two weeks ago, before a combination of COVID-19 positive tests, contact tracing and injuries forced the Bulldogs below the Southeastern Conference mandated 53-scholarship player minimum ahead of last week's scheduled game against Auburn.

Now sitting at 2-4 with an unintended bye week of sorts behind them, MSU heads to Athens for a meeting with a No. 13-ranked Georgia squad who's SEC title game aspirations hang in the balance of each remaining contest.

With that, here are three matchups to watch when the varying shades of Bulldogs meet Saturday:

Imagine a world where Ohio State quarterback Justin Fields is still in Athens. Safe to say that would solve a number of the Bulldogs' issues this season.

Bennett has received the lion's share of the touches under center this fall after supplanting Mathis early this fall, but through six games this year he's completed just over 55 percent of his passes for a 7.6 yards per attempt. The former Jones College standout's six interceptions also rank as the fourth most of the 16 eligible SEC passers.

On the flip side, MSU's defense has been startilingly good despite what the Bulldogs' record indicates. In six contests this season -- three of which came against teams ranked in the Associated Press top 25 at the time -- MSU has allowed an average of 232.7 yards per game through the air and just 127.2 yards on the ground.

That said, the Bulldogs are in a trick spot in the secondary given starting safety Marcus Murphy opted out of the 2020 season this week while running mate Fred Peters is also likely done for the year after undergoing surgery for an undisclosed injury.

Georgia's quarterbacks have had their share of issues of late -- most recently, Bennett was pulled from the Bulldogs' 44-28 drubbing at the hands of No. 6 Florida after going 5-of-16 for 78 yards, a touchdown and an interception -- but it's also possible we see former five-star recruit and USC transfer JT Daniels for the first time all year against a shorthanded MSU secondary.

Daniels' debut has been a long awaited one and he's likely the x-factor in determining what this Bulldog offense looks like come Saturday in Athens.

I'm not sure there's a strong enough variation of the word "bad" to describe how poor MSU's passing attack has been of late. I wrote last week how this can be as much attributed to growing pains that were also seen at Washington State, and, well, a global pandemic wiping out a normal offseason. But that doesn't change the fact the Bulldogs have been atrocious since their Week 1 win over LSU.

It remains unclear who will line up under center this weekend between Stanford import K.J. Costello and Will Rogers -- who started the Nov. 7 win over Vanderbilt with Costello sidelined due to an undisclosed injury -- though neither has been particularly impressive when called upon.

Costello broke a nearly four decade-old SEC passing record in the win over LSU, but has since seen his name cemented at the bottom of the conference passing charts, most notably his league-leading 10 interceptions.

As for Rogers, he's been thrust into a handful of difficult situations in replacing an inefficient Costello, but his 4.6 yards per attempt rank third-to-last nationally among quarterbacks who've received at least 20 percent of their team's snaps according to Pro Football Focus.

And then there's the Georgia defense. For a unit that consistently ranks among the nation's elite, Smart's defense has been more adept to big plays than normal this fall. At present, the Georgia defense sits No. 98 nationally, allowing 262.8 passing yards per game.

In fairness, those numbers are skewed somewhat by the 571 and 564-yard total offensive outputs recorded by Florida and Alabama, respectively, and the Bulldogs haven't allowed more than 215 yards in any of its other four games this season.

MSU has done little to inspire any confidence its offense is ready to turn a corner regardless of who lines up at quarterback, while Georgia is fresh off being annihilated by the high-flying Florida offense. Expect the red and white clad Bulldogs to get back on track Saturday.

MSU and Georgia don't meet often given they're on different sides of the SEC, but history is on the side of this week's hosts.

Though the teams have only met five times since 1997, Georgia holds a 4-1 edge over that span and a series lead of 18-6. Of those six wins, MSU has recorded just two victories since 1974 and the Bulldogs haven't won in Athens since Dwight Eisenhower was President.

Mike Leach's inaugural season in Starkville has been one of tremendous highs and incredible lows. After the air raid rather loudly announced its return to the SEC in Week 1, it has since fallen off a cliff, including not having accounted for more than 300 passing yards since the first week of October.

According to BetOnline, MSU opened as a 24-point underdog against Georgia. It's unlikely Leach's squad scores an upset Saturday given what we've seen this season and past precedent, but covering the spread would be a win in itself.