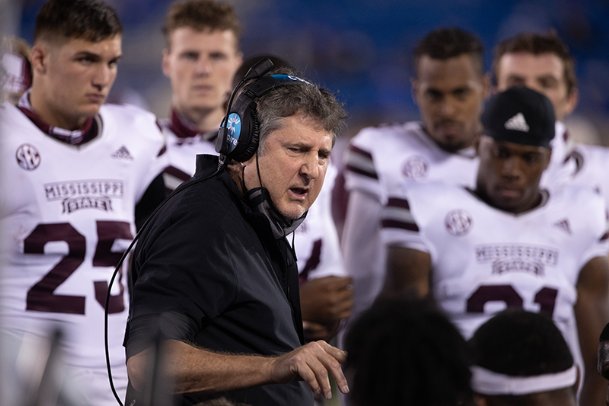 After some confusion early Monday, when the dust cleared Mississippi State still remained scheduled to play Georgia on Saturday. Photo by: Kentucky Athletics

STARKVILLE -- Mike Leach is planning for a trip to Athens on Saturday.

While speculation ran rampant Monday that Mississippi State's scheduled contest against No. 13 Georgia could be adjusted -- in part due to comments made earlier in the day by Ole Miss Athletic Director Keith Carter that the Egg Bowl could be moved up a week, if needed -- Leach told reporters he was still planning for the red-and-white-clad Bulldogs to the east as of his 3:30 p.m. press conference.

"We're prepared to play against Georgia," he said. "That's what we've heard predominantly; there are rumors swirling and things like that. If any of them happen to be true, you guys might actually know before I do -- and if you do, I'd appreciate it if you'd alert me immediately, and then I could prepare accordingly."

Under current Southeastern Conference policy, the league can hypothetically rearrange the schedule by, for example, changing MSU's Saturday opponent, should COVID-19 concerns limit a team's ability to field a roster above the 53-scholarship-player threshold by 8 p.m. Monday. As Monday night came and went, MSU is still scheduled to face Georgia after the deadline expired.

"It'd be an unmitigated, torturous nuisance," Leach said of how an opponent switch would affect his team. "... It'd be very difficult. I've been up all night last night watching film and taking notes and writing stuff down and I'll be at it tonight trying to pinpoint things a little bit, and then all of a sudden for them to change, no, it'd be pretty tough."

While the game is still set to happen as planned, MSU was afforded a bye week of sorts after its contest originally slated for Saturday against No. 23 Auburn was postponed due to the Bulldogs falling below the 53-scholarship player threshold. Monday, Leach said he's hoping his squad will be healthy enough to compete but noted that contact tracing has played a big part in MSU's inability to play last week.

The Bulldogs returned to practice Thursday, albeit in a limited capacity, after the football facility was emptied and ultimately deep-cleaned to mitigate the spread of COVID-19 within the team and staff.

Leach also explained the lower numbers undoubtedly altered what he hoped to accomplish in a normal week of practice.

"Nah, it's impossible to get the same amount of work," he said. "I mean there's a big difference between practicing with a full load of players and a handful. You try to get reps tough, you try to get reps, and then you just have to limit it. And then if you're short a few positions, then it kind of limits what others can do with regard to a team setting. So you try to get in what you can."

Assuming MSU's game with Georgia remains on as scheduled, the Bulldogs will have three games remaining following the contest. MSU will travel to Ole Miss on Nov. 28, followed by a home contest against Missouri, while the previously scheduled Auburn game will be held on Dec. 12.

This year will mark just the second time in school history the Bulldogs will play two regular season games after the Egg Bowl. The only previous time it happened was during the 1936 season, one in which MSU fell to Duquesne in the Orange Bowl.

Leach said it is unclear whether starting safety and West Point native Marcus Murphy will rejoin the team or head to the NFL after he announced last week he would opt out of the rest of the 2020 season.

The first-year head coach loosely alluded to a family situation being the root of Murphy's opt-out, most likely attributed to his son, Mason, who is battling a rare genetic abnormality and thus is at higher risk amid the COVID-19 pandemic.

"After careful consideration of what is best for me and my family moving forward, I have decided to opt out of the 2020 football season," Murphy wrote in an announcement released via Twitter. "I appreciate the love and support I've received during my time at Mississippi State University."