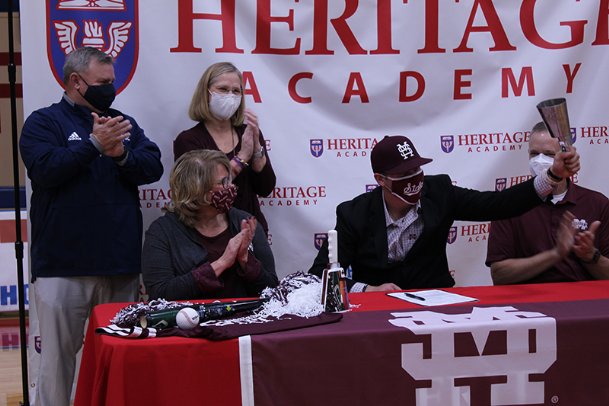 After signing his letter of intent to play baseball at Mississippi State on Monday, Heritage Academy senior Aaron Downs reached for the cowbell sitting on the table. He rang it loudly in a homage to his school of choice. Photo by: Theo DeRosa/Dispatch Staff

"Dang," he thought to himself. "My dreams are starting to go away."

After breaking his fibula and dislocating his ankle playing football for Pella High School, Downs had to have surgery. He wasn't sure whether the path to playing professional baseball -- his sport of choice -- was crumbling in front of him.

But Downs kept going. Last December, with the cast still on his leg, he moved south to Columbus, seeking warmer weather and tougher competition. He came alone to the city where he'd spent the summer two years ago, living with East Coast Sox president and director Greg Sykes and enrolling at Heritage Academy.

"I moved down here and haven't moved home since," Downs said.

On Monday, Downs ensured he won't be leaving anytime soon. The Patriots standout signed his national letter of intent to play baseball at Mississippi State.

Rated the No. 87 national prospect by Perfect Game, the 5-foot-11, 205-pound Downs signed with the Bulldogs as an outfielder, though he can also play third base capably.

To Downs, that means not only making a name for himself but being a strong teammate, something Ball said he was for the Patriots in his brief time at Heritage Academy this past spring.

Downs recovered in time to play in just three games before the COVID-19 pandemic shut down his junior season, and he's hoping for more playing time for his senior year and at Mississippi State.

"I feel like I can be an impact player right away when I get there," Downs said.

East Coast Sox vice president and director Eric DuBose said Downs' talent and work ethic could pay off sooner than later. A strong performance this spring could mean a high pick in the 2021 MLB draft and a large signing bonus that could cause Downs to make an early leap to professional baseball

"It's going to have to be something where he gets drafted pretty high for him to come out, and that's just something that (depends) on how he plays this spring," DuBose said.

Given his familiarity with Downs' tools and character, DuBose wouldn't be surprised if that were to happen. He's seen Downs excel with the Sox in his summers with the showcase organization and knows what Downs is capable of.

"From the time he got here, he was one of us," DuBose said. "He fit right in with who we are, what we do. It meant a lot to us that he chose us to come and be a part of."

If Downs -- the No. 69 prep draft prospect, according to Baseball America -- does enter the professional ranks early, he said his move to Columbus has helped him prepare for the often isolating lifestyle the minor leagues can bring.

But if he ends up heading to Mississippi State, Downs will hardly be alone. What Ball called a "family" atmosphere will be just down Highway 82.

"If he's having a bad day, he will come right down the road to Columbus, hang out with some of his friends, go hit in our facility and just kind of relax and get back up," Ball said.

"The ball just sounds different off his bat when he hits the ball," Ball said.

He said he expects Downs to start at Mississippi State if he doesn't go to the draft next summer. Just a year removed from so much uncertainty, it's clear the senior's efforts have paid off.