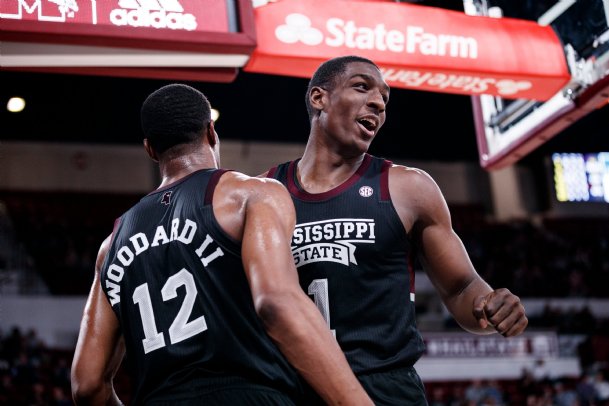 Two years ago, four-star recruits Reggie Perry and Robert Woodard II were roommates in their freshman season at Mississippi State.

Wednesday, both are projected to achieve their lifelong dream of being drafted into the NBA.

"It would be really special, just to get our names called on the same night, whether it's the first round or second round," Perry, the 2019-2020 Associated Press co-SEC Player of the Year, told The Dispatch. "Just being able to put Mississippi State on the map, it would be special just the amount of work we put in together for two years at Mississippi State and being able to grow through tough times."

Since their collegiate sophomore seasons ended abruptly in March due to the COVID-19 pandemic, Perry has trained in Las Vegas with IMPACT Basketball, while Woodard II has elected to do the majority of his workouts in his hometown of Columbus.

"We've talked on and off, but that's my guy, so we make sure we keep in contact," Woodard II told The Dispatch of going through the draft process with his college teammate. "I actually talked to him (last week). We talk about basketball sometimes, but at the end of the day we try to check on each other and see how we're doing and holding up."

Perry said he's been interviewed by 25 or 26 different NBA teams, while Woodard II has spoken with every single team in the league. Neither has talked with any team more than twice, with Perry telling The Dispatch the most recent team to interview him a second time was the Orlando Magic.

"They're really trying to just get to know me as a person," Perry said of talking to NBA front offices. "A lot of teams already know what I can do on the floor. So they'll ask questions about what I do off the court, what I do to overcome things and stuff like that. Really, all of the teams ask the same questions."

Citing conversations with his agency, Priority Sports & Entertainment, Woodard II said he expects to be picked anywhere from 20th to 40th overall. Sources close to the MSU men's program confirmed Robert's prediction, telling The Dispatch that NBA teams with pick No. 20 and above have called the school extensively the last three weeks asking for information on the Columbus native, and organizations at the back end of the lottery are doing their "due diligence."

"I can bring a versatile defender (to a team immediately)," Woodard II said. "Being able to switch to (guard) positions one through four, and maybe even five possibly if teams are playing small ball. On the offensive end, I've been able to knock down shots and take pressure off the key players I'd say. I'm a pretty consistent player and a competitive player day in and day out."

MSU men's basketball coach Ben Howland told reporters last week several teams have reached out to him saying Woodard II performed the best in the interview portion of the draft process out of any eligible draft prospect, calling the Columbus native "incredibly prepared for each team."

Both Howland and Woodard II himself feel his draft stock has improved tremendously after an impressive virtual NBA combine performance.

Woodard II traveled to Memphis for his virtual combine workout, which was limited to him and three other people in the gym. He tied for third out of all NBA draft prospects in the spot-up 3s drill, nailing 74 percent of his shots. Woodard II also turned in the sixth best 3-point star drill of any prospect, hitting 65 percent of his shots. The 6-foot-7 forward also measured at a 7-foot-2 wingspan, which is enough to make any NBA general manager salivate.

"Robert is going to have a great career, very mature for his age, and has been lifting really hard," Howland said. "He's really helped himself over these last two weeks."

Meanwhile, Perry, a 6-foot-10 forward, said he is optimistic of going between picks 20 and 35, even though most NBA mock drafts have him projected to be taken in the mid-to-late second round.

"(I think I'm) a versatile big," Perry said. "A big that's able to rebound at a high level, pass at a high level and able to guard multiple positions. Those are the biggest things I'll try to contribute as soon as I get drafted by a team."

Both draft hopefuls will watch the draft in Mississippi, with Perry viewing the event with his family in Starkville, while Woodard II will take in the night with his relatives in Columbus.

"It's gonna be great and truly a blessing to have them by my side," Woodard II said of his father and mother. "They'll finally get to see the big day and the big night. I'm very much looking forward to it."