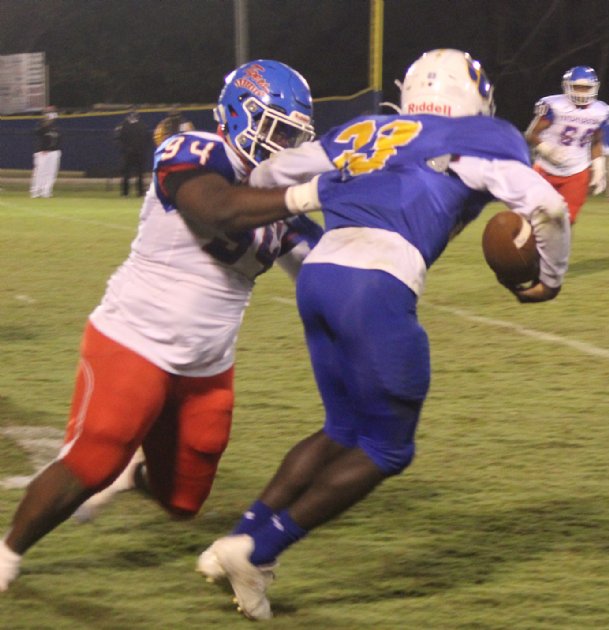 MADISON -- Top-ranked Starkville High School suffered its first loss of the season Friday at unranked Madison Central, a 15-9 defeat that could cost the Yellow Jackets (6-1) their No. 1 ranking.

The Jaguars' Vic Sutton scored from 10 yards out with 4:49 to go to send Starkville to its first defeat this year. Sutton also found Creek Robertson for a 25-yard touchdown pass in the second quarter.

Starkville quarterback Luke Altmyer answered with a 16-yard scoring pass to Sam Hunt with 2:38 to go in the second quarter, but the point after was no good.

Josh Eaves made a 26-yard field goal in the fourth quarter to put the Jackets ahead, but Sutton struck for Madison Central, and Starkville couldn't respond.

Altmyer finished 19 of 29 passing for 229 yards and a score. Stacy Robinson had five catches for 64 yards, and Kobe Larkin had six grabs for 63 yards.

The Jackets' run game was heavily limited, resulting in just 50 yards on 20 carries. Amariyon Howard had 15 yards on six attempts, and Jordan Mitchell had 13 yards on five carries.

Starkville is still looking for an opponent next Friday after Murrah canceled fall sports, including football, because of the COVID-19 pandemic.

GRENADA -- West Point lost for the second time in as many games Friday, falling to Grenada 28-21 in overtime on the road.

Grenada scored on its overtime possession, and the Green Wave (4-3) couldn't answer.

Cameron Young had 130 yards, including a 4-yard touchdown, on 25 carries for West Point, while JaKobe Pate added 85 yards on 14 attempts, and Chris Ivy rushed five times for 39 yards.

Keshawn Henley had a 14-yard touchdown for West Point and finished with 29 carries on four attempts.

Jamarquez Melton caught a 65-yard touchdown pass from Corbin Kelley, who finished 3 of 9 passing for 108 yards. Trey Ryland had two catches to account for the other 43 yards.

West Point will host Columbus (1-6) next Friday at Hamblin Stadium.

The Trojans were outscored 20-7 in the first half and 12-7 in the second half.

COLUMBUS -- Marquez Shelton filled in admirably at quarterback for West Lowndes (4-3) on Friday, throwing for two scores and running for another in a 37-7 home win over Noxapater.

Shelton, taking over for the injured Melvin Crawford Jr., was 2 for 2 passing for 75 yards with two touchdown passes, both to Joshua Franklin. Shelton also ran for a 59-yard score.

Cardarious McGee had a 40-yard touchdown run and a 20-yard catch.

Fredrick Rice ran for 79 yards and a touchdown for the Panthers.

West Lowndes will host Okolona (1-6) next Friday in Columbus.

The Tigers put up a balanced scoring effort with 33 points in the first half and 27 more in the second.

The Tigers (4-1) will host Choctaw County next week in Macon.

Loden finished with 155 yards on 10 carries and a 60-yard receiving score from Braeden Triplett, who finished 6 of 10 passing for 109 yards and two scores.

On defense, Loden led the team with 19 tackles, Jackson Langley had 12, and Zack Corban had nine. Triplett and Jon Garrett Lowe each had six, and Scott had five.

Caleb Farlow and Townley each had five tackles to lead the Rams, while Tyler Looney had four and recovered a fumble.

Hebron Christian will host Humphreys Academy for the final game of the regular season next week, and Columbus Christian Academy will travel to Calhoun Academy.

LEXINGTON -- Cameron Dill threw for five touchdowns and ran for two more to carry Oak Hill Academy to a big win over Central Holmes Christian on Friday in Lexington.

Dill had touchdown passes of 18, 19 and 25 yards to Manning Huffman, a 20-yard scoring pass to Jake Glusenkamp and a 30-yard touchdown toss to Garrett Edwards. The quarterback also ran for 16-yard and 28-yard scores.

Jack Easterling made six of seven extra points for the Raiders (3-5).

Oak Hill will host Winona Christian next Friday in West Point in the last game of the regular season.

Chandler Box led the Pirates with a 3-yard touchdown run, a fumble recovery and seven tackles.

Drake Lowery picked off two passes and had 6.5 tackles, while Clayton Lee had 5.5 tackles and a fumble recovery. Clay More had 4.5 tackles and forced a fumble.

The Pirates will host Meadowview Christian (Alabama) next Thursday in Carrollton, Alabama.