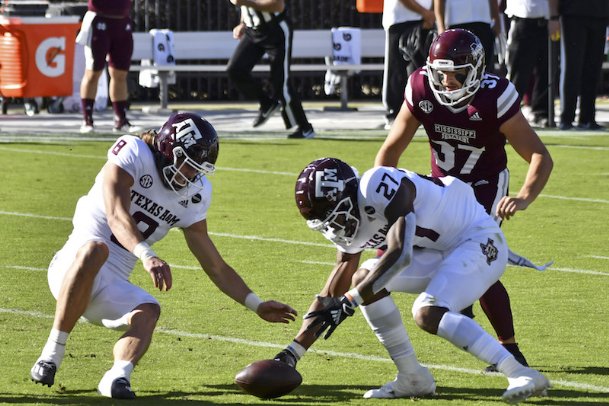 STARKVILLE -- Standing at midfield, head coach Mike Leach gathered his entire team into a huddle and lambasted those circled around him.

In a tradition he employed during his days at Washington State, Leach recycled his whole team huddle approach just 33 seconds into the second quarter as the air raid offense headed into a dismal tailspin for the third straight week in a 28-14 loss to No. 11 Texas A&M.

"Right now we're one team on Tuesday and Wednesday; we're another team on Saturday," he said postgame. "We have to be able to translate it to the field."

Saturday's lowly effort marked the third porous output by Leach's offense in as many games. Gone are the once-glimmering memories of an upset of then-No. 6 LSU in Baton Rouge. Instead, the Bulldogs replaced their brief chance at national relevance with the nightmarish ineptitude of an MSU offensive line that allowed four sacks, four quarterback hurries and five tackles for a loss in the first half alone.

Time after time Saturday, the Bulldog offensive line, lauded for its depth and talent over the offseason by coaches and media pundits alike, fell short of its purpose: protecting the quarterback. The Aggies employed a three-man rush, drop eight philosophy, but it left quarterback K.J. Costello picking himself off the turf on nearly all of his 22 dropbacks.

In all, a Texas A&M defense that entered the contest tied for 61st nationally in sacks this season finished the afternoon with six sacks, more than doubling its yearly total entering the game.

While MSU's offensive line endlessly faltered Saturday, Costello's incessantly inconsistent play led to his second straight benching in favor of freshman Will Rogers. Finishing his afternoon just 15 of 22 passing for 99 yards, a miscommunication with receiver Tyrell Shavers in the end zone on the Bulldogs' second drive of the game led to the former Cardinal signal caller's nation-leading 10th interception of the year.

The final nail in Costello's proverbial coffin came midway through the third quarter. Running for his life, as he did most of Saturday, a gaggle of Aggie defenders collapsed on him as he rolled to his left. Falling to the ground, Texas A&M middle linebacker Buddy Johnson forced the ball out of his hands before lineman Jayden Peevy fell on top of it to give the Aggies possession.

Picking himself off the turf in frustration after peering at the video replay of his fumble on the hulking JumboTron in the south end zone at Davis Wade Stadium, Costello screamed in frustration.

With Costello headed toward the pine once more, freshman quarterback Will Rogers was given the keys to an offense that veered off the road, crashed into a tree and fell off a 10,000-foot cliff during a scoreless streak of over 111 minutes. As was the case a week ago in Lexington, Rogers showed flashes of effectiveness despite persistent pressure. He got the ball out quickly, was sharp in his decision-making and briefly offered a fleeting glimpse of hope in Saturday's slugfest with his 32-yard fourth-quarter touchdown pass to Malik Heath.

"I thought Will came in and did a great job for us," junior receiver Austin Williams said of Rogers. "He definitely upheld his part. As he was talking about on the field, you've just got to do your job, do your one-eleventh, and he definitely did his and came on and performed well and definitely helped the team out."

"When you consider the quality team that A&M has, that drive Will had was maybe as good as I've had a freshman, especially a true freshman at his age, have before," Leach added.

Fourteen days from Saturday, MSU will roll into Tuscaloosa for a date against No. 2 Alabama. With a bye week in tow ahead of a Halloween night showdown with the Crimson Tide, Leach and the MSU offensive staff will be tasked with kickstarting an aerial assault that's looked closer to a paper plane than the Boeing 747 that exited Baton Rouge atop college football's national consciousness a meager four weeks ago.