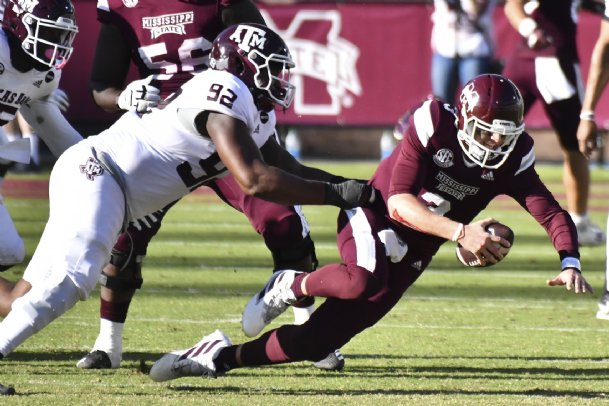 STARKVILLE -- Take one comically lucky touchdown away from Mississippi State on Saturday and you wouldn't have missed much if you napped through the Bulldogs' 28-14 loss to Texas A&M at Davis Wade Stadium.

For the third straight week, the offense mustered nothing and fans were left with more questions than answers.

The book on Mike Leach's tenure at MSU is a long way away from being written, and considering there wasn't any offseason developmental time to speak of in this nutso year, maybe he should get the benefit of the doubt for now. Nevertheless, none of that makes the current on field product any less unwatchable.

A 1-0 start is quickly going to turn into a 1-4 start, if we can safely assume these Bulldogs aren't equipped to take on Alabama in two weeks. The bandwagon doesn't appear to be very full at the moment.

As always, for those that are new to Bulldog Bullets, The Commercial Dispatch will bring you an instant reaction blog of Mississippi State football games posted immediately after the final gun filled with short observations and commentary.

-- Not only did standout running back Kylin Hill not play Saturday, he wasn't even at the stadium. Wonder what's going on there?

-- To put it bluntly, MSU's offensive line was horrendous. Texas A&M rushed three men the majority of the day and Mississippi State's offensive line blocked it like the Aggies ran engage eight. Six sacks, not to mention additional quarterback pressures.

-- Offensive line woes aside, something needs to be said. K.J. Costello is by all accounts, a smart, well-respected member of the MSU team. And yet, his on-the-field performance has been a colossal disappointment. There's only so much you can do when you have defenders in your face instantly every other play, but he's consistently failed to take care of the ball and is not exactly fleet of foot.

-- Here's the thing about the offense: it's not going to change all season, or for Mike Leach's entire MSU tenure for that matter. Regardless of if Leach succeeds or fails at MSU, he's going to do it with the air raid. With that in mind, maybe it's best to play Will Rogers, the freshman quarterback, for the rest of the season and see if he's capable of starting next season. Garrett Shrader isn't built to run this system, and we've seen how the Costello experiment has played out.

-- First four series: three three-and-outs and an interception, complete with a blocked punt that put MSU in a 14-0 hole.

-- Mississippi State called a timeout with 31 seconds left in the second half on fourth-and-long only to... punt? Someone explain this to me.

-- I laughed a little when Mississippi State scored its first touchdown in forever thanks to a comically lucky pinball-like deflection. Come on, you know you did, too.

-- Rogers' first collegiate touchdown was the first offensive touchdown the Bulldogs had scored in eight quarters.

-- A (positive!) observation: Shawn Preston Jr. has given the Bulldogs a boost in the secondary this season.

-- Six minutes to go, down two possessions, third and long, and Rogers throws a pass 10 yards short of the sticks. Then MSU punts. Uninspiring sequence.

-- I know a good chunk of this can be attributed to sacks, but MSU finishing with negative rushing yards is something.

The Bulldogs get a much-needed week off where they will re-evaluate quite a few things, I'm sure. At least their next opponent isn't a powerhouse like Ala... never mind.