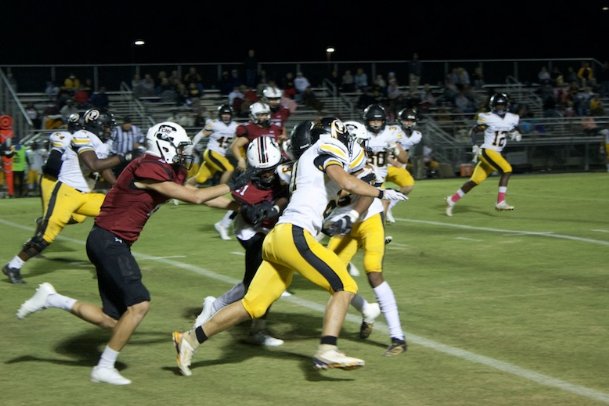 CALEDONIA -- Caledonia head coach Michael Kelly hobbled down the sidelines in a tizzy.

Swinging the silver crutches by his side to indicate spacing to his secondary, Kelly dragged a medical boot that confined his left leg and foot, a byproduct of a hit he suffered from one of his own players on the practice field in recent days.

Unfazed by the lower leg injury, he did his best Hugh Freeze in a hospital bed impression along the Caledonia bench as he emphatically coaxed his defense throughout Caledonia's 37-12 loss to Pontotoc on homecoming night Friday.

"At the end of the day, it's like I tell these kids, it ain't about me," he said. "It's not (about) my leg. I'm going to be OK, and we've got to find a way to keep playing and we'll get ready to rock and roll, and hopefully my leg, it'll heal."

Despite a swarming effort on the interior and at the second level of its defense early, Caledonia struggled to contain strong-armed southpaw quarterback Conner Armstrong and the Pontotoc offense.

Armstrong's first scoring strike of the night came by way of a connection with his brother Cade for a 38-yard touchdown. Armstrong came just shy of his second touchdown pass when he threw just behind a wide-open receiver in the end zone. Two plays later, the Warriors settled for a field goal.

Caledonia narrowly missed a chance to cut the Pontotoc lead to eight heading into the half when a 41-yard Logan Powell field-goal attempt fell mere inches short as the second quarter clock hit zero.

Receiving the ball out of halftime, Wilburn ran to his left before tossing an option pitch. It was snatched out of the air by Pontotoc linebacker Cameron Chunn, who scampered 35 yards for a score, extending the Warriors' lead to four possessions just over a minute and a half into the third quarter.

Pontotoc added its final score of the night with 54 seconds remaining in the frame when running back Jordan Ball raced 55 yards down the Caledonia sideline for the Warriors' third score of more than 35 yards.

Walking off the field postgame, Kelly labored a touch using his crutches as an aid but vowed he and his defense would improve on Friday night's performance.

"We give up too many big plays," he said firmly. "That's been our Achilles' heel all year on defense, and it killed us tonight. I think a lot of that, at the end of the day, that's my job on that side of the ball. I pride myself on being a defensive coach. We ain't been very good on defense, and we've just got to get better."