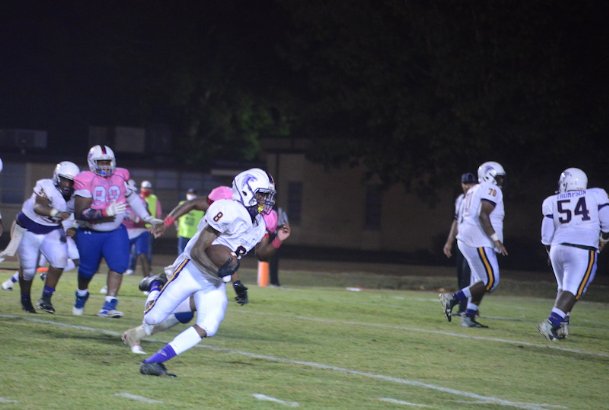 Columbus junior Michael Mosley runs with the football during last Thursday's game at Grenada. The Falcons lost 14-7, their fourth loss by seven points or fewer this season. Photo by: Courtesy of Chuck Hathcock/The Grenada Star

So did assistant DeMarcus Vance. Then offensive coordinator John Davis.

None of them quite believed what they saw: Lake Cormorant, the next opponent on the Falcons' schedule, had pulled off a 35-26 upset at West Point, winner of four straight MHSAA Class 5A championships.

The Falcons managed to beat the Gators 27-26 in overtime last year -- a "huge momentum-swinger" for the Columbus program, Pulphus said -- but they know they'll have to dig down deep for another upset Friday.

This year, Columbus' 1-5 record likely belies its talent. The Falcons' biggest loss was by 13 points, and they haven't lost a game by more than a touchdown since.

To lose multiple games that could have swung on one call or one play was "heartbreaking" for coaches and players alike, the coach said.

"It's been pretty tough for us," Pulphus said.

Last year's win over the Gators (4-1) "set the tone" for the Falcons to finish the season strong, ending with a 2-2 record in its last four games -- no small feat for a winless team in 2018.

If Columbus can handle Mississippi State commit Gabe Cavazos, quarterback Telvin Amos and a Lake Cormorant team clearly capable of beating anyone, the sky is the limit, Pulphus said.

Although Saltillo sits at the bottom with an 0-3 record, all seven other teams -- including the Trojans -- are either 1-2 or 2-1 in district play before this week's games.

New Hope is currently 1-2, but it could vault squarely into the top or middle of the pack with a win against Center Hill at home Friday. The momentum the Trojans carry over from last week's home win over Saltillo could help, Tackett said.

"That was huge for us to pick up that victory," he said.

Getting another one, though, won't be easy. Center Hill has a 2-1 district record with wins over Lake Cormorant and Columbus -- both of whom boast victories over New Hope this season.

The Mustangs beat the Trojans 34-7 in Olive Branch last year, and Tackett respects their triple-option offense, built to chew the clock and maximize time of possession.

"It's hard to get them to go three and out," Tackett said. "That's going to be key for our defense: just trying to get them off the field."

Caledonia rebounded from a heartbreaking overtime loss to Shannon with an emphatic 42-8 win at Mooreville last week.

Coach Michael Kelly's team hopes to take another step forward when it hosts Pontotoc, receiving votes in the Class 4A poll, on Friday.

This year, Caledonia could get back to .500, improve its district record to 2-1 and get a signature win in the process.

It all depends how Kelly's team comes out Friday.

He knows West Point can't afford another bout of inclement weather on Friday's trip to Grenada in what has historically been a close game every year.

Last season, the Green Wave trailed 13-6 until the last minute of the third quarter, where they were able to score and tie things up. Tyron Orr followed with a decisive pick-six on the next Chargers possession to give West Point a win.

But in a different city and a different atmosphere, Chambless knows he has to prepare his team for potential stormy weather once again.

"Going on the road and going into hostile territory is going to make it even tougher, so we've got our hands full," he said.

Starkville coach Chris Jones said the top-ranked Yellow Jackets are happy to have their defense rounding into form.

Starkville's defense is an inexperienced unit still learning the ropes, but the young Jackets managed to hold Germantown to just seven points Oct. 2 in the team's most recent game.

"I think they're starting to be where we need them to be," Jones said.

Defense will be paramount again Friday when the Jackets head back to Madison to take on Madison Central. Last year, quarterback Jimmy Holiday -- now a wide receiver at Tennessee -- led the top-ranked Jaguars into the matchup at second-ranked Starkville, and the Jackets pulled a 24-21 upset.

But the Jags have struggled more than usual to score with Holiday gone and another solid quarterback injured -- a stark contrast with Starkville's quarterback situation, where Florida State commit Luke Altmyer keeps dealing for the Jackets.

"Luke's been doing really well," Jones said. "Right now, he's playing at a really, really high level, and I hope he can continue to do it."

The victory put West Lowndes back to 3-3 on the season, bumped the Panthers' district record to 2-2 and helped them bounce back from a 25-12 loss at French Camp Academy on Oct. 2.

Now, King said, West Lowndes will automatically earn a playoff berth with a win over Noxapater on Friday in Columbus.

Like the Seminoles, the Tigers have also fallen off after being ranked in the Class 1A top five last season. That happens a lot in Class 1A, King said, where small rosters increase variability in talent.

"You can't go out and recruit, so you've got to play with the kids you've got," King said.

King said his own roster -- already lacking in depth -- has taken more hits in recent weeks because of injuries. Senior quarterback Melvin Crawford Jr. is out Friday with a high ankle sprain; wide receiver Marquez Shelton is dinged up and is a game-time decision.

Teddy Young is used to getting other teams' best shot.

As head coach at Noxubee County, a perennial title contender in Class 3A, Young is accustomed to seeing opponents play above their true talent level when the Tigers come to town.

"Everybody's going to get up to play us," Young said.

He expects that to be true again Friday when Noxubee County visits Hatley for a district contest.

Hatley has beaten Class 2A Mantachie and Class 1A Hamilton but suffered blowout losses to Class 3A Nettleton, Class 1A Biggersville and Class 3A Aberdeen.

Young said he's glad to be able to play Friday after positive COVID-19 tests forced the cancellation of last week's home game against Corinth. Noxubee County started practicing again Tuesday and has had no further issues with the pandemic, and Young's happy to be able to continue amid plenty of uncertainty.

"This virus is unpredictable," he said.

Hebron Christian School coach David Foster knows the goals the Eagles put in front of themselves at the beginning of the season are still in reach.

Foster and the Eagles aimed to make the MAIS Class 2A playoffs this season, and though they're 2-6, it's still plenty possible.

Based on power points, Hebron is the No. 11 seed out of the 15 teams competing in Class 2A this year. Twelve teams make the playoffs. The Eagles expect to be one.

"I keep telling the guys, 'Everything's still in front of you,'" Foster said. "'You've still got the opportunities there; you've just got to go take advantage of them.'"

Those opportunities begin with Friday's road game at Columbus Christian Academy, a district opponent sitting one spot behind Hebron at No. 12 in the power points standings.

Foster said the Eagles will have to weather injuries -- center Scott Smith is out with a broken leg, two-way star Doug Loden sprained his ankle on the first play of last week's loss to DeSoto School (Arkansas), and another Hebron player hurt his shoulder last week -- and clean up their fundamentals: blocking and tackling.

The latter has been a particular problem for Hebron so far, Foster said.

"We're still not as aggressive as we need to be," he said. "This late in the season, that should already have been taken care of."

Size has been a struggle for Oak Hill Academy throughout the 2020 season.

"It's been that way all year: We've been smaller than everybody," Raiders coach Bill Rosenthal said.

Mounting injuries on a roster that wasn't all that big to start with have hurt, too. Rosenthal estimated roughly 10 of his 26 or 27 players have missed time at some point, including contributors on both sides of the ball. But the Raiders still have a shot at qualifying for the MAIS Class 3A playoffs after missing them last year if they can win Friday at Central Holmes Christian in Lexington, which would almost assure Oak Hill a playoff spot. If they lose, it will take a win against Winona Christian next week coupled with several other favorable outcomes for the Raiders to sneak in.

"That will be a little motivation for our kids: get in the playoffs and try to win a few more games and get better," Rosenthal said.

Pickens Academy has lost three straight games since a 4-0 start.

The Pirates hope to reverse that trend Friday when they host South Choctaw Academy in Carrollton, Alabama.

"We need a win right here," Pickens coach Scotty Pennington said. "We've got to step it back up."

The Pirates haven't won since Sept. 11, as a loss to Abbeville Christian Academy, Jackson Academy and Southern Academy -- and a bye week -- have followed.

Pennington said the team has been, understandably, down given its recent results -- something that reminds him of the "lull" that permeated the Pirates' locker room in their 2-9 campaign last year. Additionally, three starters and another player who saw significant playing time have had injuries that required surgery and are out for the season.

But with three games to go, Pickens can still reach its goals. If the Pirates hope to be a No. 2 seed in the AISA playoffs, they'll essentially have to win Friday against the Rebels, whose only win so far this season is by forfeit. South Choctaw has lost four straight since, including a loss by forfeit in the game immediately after their victory.

"It's going to be huge for us to get a win right now," Pennington said.