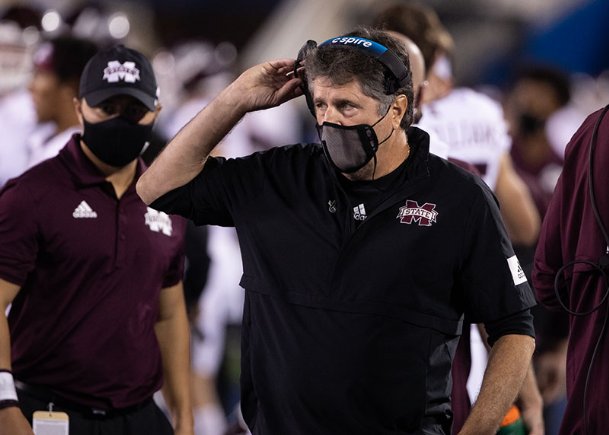 Now facing a Texas A&M streaking in its own right following a win over No. 4 Florida last week, MSU is in desperate need of a turnaround against another top-15 foe. Photo by: Mark Cornelison/Kentucky Athletics

STARKVILLE -- Mississippi State is in a tailspin.

In just three weeks, the Bulldogs went from the highs of an upset of then-No. 6 LSU in Baton Rouge to lowly outputs in losses to Arkansas and Kentucky. Now facing a Texas A&M streaking in its own right following a win over No. 4 Florida last week, MSU is in desperate need of a turnaround against another top-15 foe.

With that, here's a few matchups to watch Saturday when the Bulldogs and Aggies meet at Davis Wade Stadium:

It's not entirely clear who's going to start under center when MSU takes the field Saturday in Starkville. K.J. Costello has shown flashes (read: a 623-yard, five-touchdown performance against LSU), but the consistency hasn't been there.

During his Monday press conference, Mike Leach hinted changes could be coming to an MSU offense that's been nothing short of anemic in losses to Arkansas and Kentucky. If Costello doesn't go, it should be freshman Will Rogers at quarterback, who completed 9 of 15 passes for 43 yards and two interceptions.

Quarterback issues at MSU aside, Texas A&M hasn't exactly been a world beater against the pass. Entering this week's contest, the Aggies rank No. 64 nationally in pass defense, allowing 299 yards per game through the air.

Sans an ugly win over Vanderbilt Week 1, the past two weeks have been more telling of what Texas A&M will bring defensively Saturday. In games against Alabama and Florida -- who, in fairness, boast some of the best offenses in the country -- Jimbo Fisher's bunch allowed an average of 373.5 yards per contest and eight touchdowns overall.

MSU has been nothing short of tragic in its past two outings offensively, but facing a Texas A&M defense that hasn't been much better against the pass, it might be just what the doctor ordered for a Leach-led offense that has had its struggles this year.

Kellen Mond has played plenty of college football in his 2,345,789 years in the Southeastern Conference. OK, it hasn't been that long, but the sentiment remains: Mond has been around forever.

A season ago, he sliced and diced a middling MSU defense for 234 yards and three touchdowns as the Aggies cake walked to a 49-30 win in College Station.

That said, history suggests he won't be at his best in Starkville. In three career games versus the Bulldogs, Mond has averaged a meager 174 yards, 1.3 touchdowns, one interception and a 50.5 percent completion mark.

Entering this week's matchup, MSU's defense has been far and away the most impressive and surprising part of the 2020 Bulldogs. Allowing just 210 passing yards and 75.67 rush yards per game -- good for No. 5 nationally -- the Bulldog defense under the guidance of Zach Arnett has been among the nation's best.

The one caveat here is that the Bulldog secondary has been susceptible to coverage breakdowns. Both touchdowns allowed to Arkansas were a direct result of busted coverages, though MSU allowed just one play of 20 or more yards against Kentucky.

The Texas A&M offense hasn't been great, averaging just 27.3 points per game, but Mond has been impressive enough through three games that he could give the Bulldogs trouble.

MSU and Texas A&M vs. the turnover battle

Both MSU and Texas A&M have turned it over plenty this fall. At present, the Bulldogs and Aggies rank 14th and 12th in the SEC, respectively, in turnover margin.

For MSU, this issue falls almost entirely on Costello. Over the past two games, he's tossed seven interceptions to just one touchdown, while the Bulldogs' 11 picks overall rank dead last in the country.

This isn't to say, Texas A&M has been a whole lot better. Mond has been impressive in that he boasts seven touchdowns to just one interception this year, but the Aggies have seven fumbles on the season -- four of which have been lost.

The past two weeks have seen Mike Leach lament Costello for his turnover issues, and should the Bulldogs hope to remain in or have any chance to win Saturday, he'll have to hold onto the football.