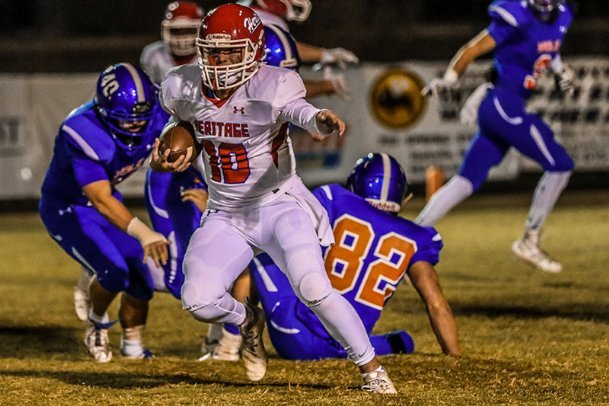 Heritage Academy quarterback Carter Putt played a big role as the Patriots beat Starkville Academy 42-7 last Oct. 18 in Starkville, one of two wins for the Pats over the Vols last season. Putt graduated and moved on to play for Northeast Mississippi Community College, but the rivalry between the two high schools lives on. They'll face off Friday for the 53rd time ever, marking the 50th straight year in which the two have played â the oldest consecutively played rivalry in the MAIS. Photo by: Mike Brown/Dispatch file photo

All time, the Heritage Academy and Starkville Academy football teams have a 26-26 record when playing each other.

It feels only right for a rivalry contest that has been played at least once a season every year since 1971, making it the oldest consecutively played rivalry in the Midsouth Association of Independent Schools -- not to mention one of the best.

"I've said it every year: It's the most fun rivalry game I've ever coached in," Patriots coach Sean Harrison said.

On Friday, the two local schools will celebrate a milestone when they play a pivotal MAIS Class 5A, District 1 game at C.L. Mitchell Field in Columbus. It is the 50th straight year the Patriots and Volunteers have faced off, and there hasn't exactly been a detente between the two over time.

The Vols inscribed the score of their regular-season win over the Pats -- 17-14, for the few on Academy Road or Magnolia Lane who don't remember -- on their state championship rings in 2017. Twenty-two miles east on Highway 82, the feeling is mutual: "BEAT STARKVILLE" flashed in all caps on the LED board outside Heritage Academy on Wednesday morning.

Last year, the Pats managed to do that and then some. They routed the Vols 42-7 on Oct. 18 in Starkville and beat them again, 55-10, for the MAIS Class 5A title five weeks later in Jackson.

"It was pretty bad," Starkville Academy junior left tackle Karsten Upchurch recalled of the championship game. "It was heartbreaking."

It was also "a lot" of motivation for the Vols, Upchurch said. But he and coach Chase Nicholson both said Starkville Academy can't dwell too much on the past with such a pivotal game to be played.

It shouldn't be hard for either team to focus on Friday's contest given its stakes -- rivalry excepted. Starkville Academy is 4-0 in district play, while Heritage Academy is 3-0, making the game a de facto district title game in the regular season's penultimate week.

With the district title often wrapped up well before or a while after the Vols play the Pats, Nicholson said both teams have been afforded a rare opportunity and must take advantage of it.

"Our fate's in our hands," he said. "That makes it exciting."

Heritage Academy, which would have to beat Washington School next week to clinch the district even with a win Friday, knows it's likely playing for the No. 2 seed in the Class 5A playoffs. Harrison said the matchup between his team and the Vols always seems to have the same -- or, as was the case last Nov. 22, higher -- stakes.

"It's fun because it's always for something rather than just the pride of it," Harrison said.

But many of the players who basked in Patriot pride last year on the Jackson Academy football field won't be able to reprise their roles Friday. Star lineman Eli Acker is at Ole Miss, wide receiver Jared Long plays for Central Arkansas, and 11 other players moved on, too.

And while Starkville Academy lost plenty of talent, including defensive star Matt Miller, the roles have somewhat flipped, Harrison said.

Harrison knows one of those veteran Vols -- running back CJ Jackson -- will be a tough matchup for his defense. With 1,755 rushing yards and 23 touchdowns already this year, Jackson has put Starkville Academy on his back. Now, Heritage Academy hopes to put Jackson on his.

Patriots nose tackle John Jackson said he hopes his team will be able to flex its physicality against the star running back early on, hoping to throw him off track. Otherwise, the Starkville Academy senior is likely to keep piling up the yards after contact, something Harrison knows Jackson does well.

"I haven't calculated, but I bet it's up there," the coach said.

And as Jackson goes, so does Starkville Academy's offense. Nicholson said when Jackson and the Vols' offensive line and wide receivers are all clicking, his team is hard to stop.

"CJ's had a great year so far, and that just makes them respect the run game so much, and it opens up passing lanes for me and the receivers," junior quarterback Randall Futral said. "So it's been great."

It's not just on offense where Starkville Academy hopes to take advantage of a Heritage Academy team that struggled in last week's 31-14 loss at Lamar School in Meridian. Harrison acknowledged that when the Pats went back and watched film, something seemed awry on every play: a block, a throw, a catch or a tackle that just wasn't there.

"You kind of felt like we had the opportunities; we didn't have 11 guys all doing what they were supposed to do," Harrison said.

But a good week of practice has the Pats feeling more like the team that went 14-0 last season, senior wide receiver Sam Hannon said.

"I think we'll be alright -- just do what we do and execute," Hannon said.

The wideout said beating the Vols twice last year was "awesome," but no matter how the Pats fare Friday, he's excited.

"It's always fun playing them," Hannon said. "It always means something."