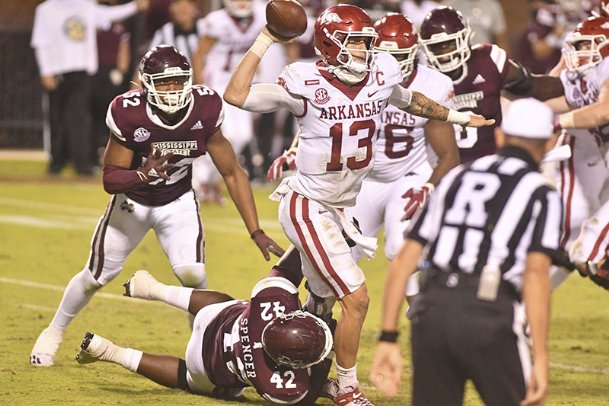 STARKVILLE -- Zach Arnett isn't one to mince words. There's a brutal honesty to Arnett's verbiage day to day. In press conferences, he's gruff but poignant. He tells it how it is. He's unafraid to call out his group for a lack of effort or that a performance wasn't up to snuff.

"(We) did some good things, did a nice job there during the fourth quarter getting off the field, getting third down stops and forcing punts -- got a turnover in there," Arnett said following MSU's Week 2 loss to Arkansas. "But obviously there were some mistakes that cost us points."

While Arnett's concerns over said mistakes -- coverage breakdowns and missed tackles -- were valid, his defense, on paper, has been close to perfect compared to expectations heading into the fall.

Just two years removed from a unit that boasted three first-round NFL draft picks, this year's group under Arnett's guidance is perhaps more impressive. The Bulldogs had to replace seven starters from last season but have improved in their absence.

After leading the nation in total defense in 2018, the Bulldogs regressed to No. 73 nationally in 2019, allowing just a tick under 400 yards per game. With linebacker Willie Gay Jr. and cornerback Cameron Dantzler, among others, now off to the NFL, MSU sits as the nation's No. 6-ranked team against the run and No. 23 against the pass despite a roster that saw 12 underclassmen on the opening-week depth chart.

"Everybody is just coaching us up real well and guys are not playing scared or anything like that," sophomore linebacker Aaron Brule said following a Week 1 win over LSU. "Everybody feels like they belong right here."

Transitioning out of Bob Shoop's 4-2-5 defense into a 3-3-5, MSU's defenders have felt more freedom in the way they attack offenses, particularly in the trenches. In Shoop's scheme, the Bulldog defensive line was tasked with man responsibilities, compared to the gap assignments seen in Arnett's approach.

While Arnett's system hasn't completely abandoned what worked under the Shoop regime, the Bulldogs have embraced more stunts on the interior coupled with more twists than the average team. Not totally unlike the reactionary nature of route running in Mike Leach's air raid, what the offense shows directs how defensive linemen are to proceed in their rush.

"We're not believers here in what's typically referred to as 'gap control' -- You're responsible for one gap, and you play it," Arnett said last week. "We're a little bit more, 'We send you a direction, you've got specific reactions based on what the offense might do, and we want to cause disruption, and it's the guys behind you's job to fill where needed and make you right.'"

The Bulldogs defense then backed up its play by limiting a generally solid Arkansas running game to just 63 yards on 37 attempts. One week later, MSU held a Kentucky team that exploded for 408 yards on the ground against Ole Miss to a meager 84 yards on the ground.

"I feel like coach Arnett is calling some great plays," sophomore defensive tackle Jaden Crumedy said Monday. "And we're able to be exactly whoever we play runs it. If they run to the A-gap or something, then that's where we're slanting to. If they're trying to get outside, we've got somebody coming from the outside to get them."

This isn't to say MSU's defense has been perfect. Coverage breakdowns against Arkansas cost the Bulldogs 14 points and, ultimately, a chance at victory. LSU also narrowly missed a wide-open Racey McMath for what would've been a go-ahead touchdown in the third quarter if not for junior linebacker Jordan Davis hitting quarterback Myles Brennan's arm at the last possible second and causing the pass to fall into the hands of cornerback Esaias Furdge.

Speaking postgame Saturday, senior linebacker Erroll Thompson was queried on what the identity of the 2020 Bulldogs defense is at present. Thompson shied away from the question through a laugh, noting he'd leave that up to the writers listening in over Zoom.

In a sense, he answered the question in his silence: This year's unit is still evolving. But for a group that was maligned throughout the offseason for its youth and inexperience, Arnett has maintained the defensive legacy of Bulldogs defenses before him.