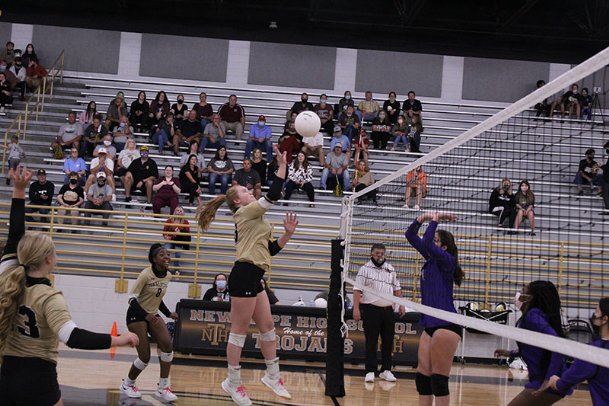 New Hope senior middle blocker Micaela Hudgins delivers a kill for the Trojans in the first set of Tuesdayâs first-round playoff match against Cleveland Central. The Trojans swept the Wolves and will face Center Hill on Saturday. Photo by: Theo DeRosa/Dispatch Staff

NEW HOPE -- Micaela Hudgins finished the block, turned to face her teammates and flashed a look that conveyed a simple message.

The New Hope senior middle blocker has always found being able to meet an opponent at the net and rebut a shot "electric," and the play she made to capture the final point of the first set of Tuesday's MHSAA Class 5A first-round playoff match against Cleveland Central was no different.

"It's really like an energy-builder on a team," Hudgins said. "If you come off and celebrate really loud, it can really build some momentum."

After the point, Hudgins and the Trojans let out an exhilarated scream that reverberated through the New Hope gym. Then they got to work.

New Hope (18-6-1) lost just two points in the second set, swept the third set and sealed off an emphatic first-round win over Cleveland Central on Tuesday. Set scores were 25-13, 25-2 and 25-0 as the Trojans advanced to Saturday's second-round match against Center Hill.

She admitted her team came out a little slow in the first set, at least partly because it hadn't played a match since being swept at Starkville eight days prior. The Trojans weren't their usual selves in the opening minutes, leading just 11-8 roughly halfway through. But Hudgins and senior outside hitter Daylyn Nettles fired up the team and the home crowd, delivering big kills en route to the set victory.

Woolbright said the effort and energy she saw from the Trojans from there on out was something she hoped for prior to the match. Earlier Tuesday, the team held a devotional in which Mt. Vernon Church student pastor Brandon Allen talked about turning on the "juice" when New Hope needed to.

"That was really motivating, and I think that he helped kind of tie into it all," Woolbright said.

The Trojans were fully juiced up by the time Hudgins' block at the end of the first set hit the hardwood, and they showed it in remarkably quick second and third sets.

Freshman setter Annie Woolbright served and won the first 17 points for the Trojans in the second, fooling the Wolves' returners so badly that they shied away from multiple serves and let them touch the floor for mystifying aces. Hudgins hit a ball long to end the New Hope run, but she came right back with a well-placed kill on the very next point -- one of her team-leading 12 kills on the night.

"I owe it to my teammates to be able to shake that kind of thing off and not worry about it for too long and just get my head back in the game," Hudgins said.

The Trojans won seven of the following eight points to take the set at 25-2, and they didn't slow down. Sophomore Madyson McBrayer held serve for New Hope in the third set, never once having to relinquish the ball to a teammate as she and the Trojans won every single point. McBrayer finished with nine aces, while Annie Woolbright had eight.

Hudgins said her team's decisive win in the second set was motivation enough to do what New Hope did in the third.

"Once we can see that we can beat a team that much, it's kind of our goal to do it again," she said. "We don't want to let them get too far ahead and kind of slow down our game, because then we have to pick it back up."

But despite the relative ease with which the Trojans dispatched the Wolves, Woolbright remained concerned. She knew with a win, New Hope's home second-round match at 6 p.m. Saturday would likely be against Center Hill, the defending Class 5A champion. (The prediction proved correct, as the Mustangs handled Vicksburg nearly as quickly as New Hope beat Cleveland Central.)

So when the Wolves called timeout trailing 21-0 in the third set, Woolbright instilled a reminder in her players.

Still, the Trojans think they're ready. After all, they made the state final four last year, the first time in school history they ever did that. Getting back there -- or further -- necessitates a win Saturday, and New Hope feels it can deliver.

"We used to dream about playoffs against Center Hill and playing teams like that -- being able to play with the big dogs -- and now we (will) actually have that opportunity," Hudgins said. "I think we're all really excited about it."

CLARKSDALE -- Caledonia defeated Clarksdale handily in Tuesday's road match to advance to the second round of the MHSAA Class 4A playoffs.

Caledonia will take on Corinth at 6 p.m. Saturday on the road.

OXFORD -- Starkville High School was ousted from the MHSAA Class 6A playoffs with a loss to Oxford in straight sets on Tuesday.

Karlie Brooks had 15 digs for the Yellow Jackets (14-5), and Abbigail Upchurch had six kills.