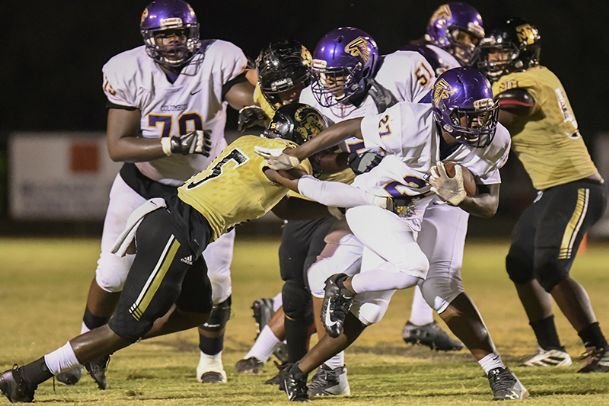 Columbus running back Karon Hawk (27) gets past New Hope defensive back Hayden Harris (25) during last yearâs game between the two schools on Sept. 27, 2019, in New Hope. The Falcons and Trojans will resume the rivalry Friday in Columbus. Photo by: Dispatch file photo

"Whoever wins this game will be in the driver's seat," Tackett said. "You're immediately first in the district. Three more, and you're almost guaranteed a playoff spot after that. You definitely don't want to be behind the 8-ball come Saturday morning."

Add to it the rivalry aspect -- plenty of Falcons and Trojans are friends, family or acquaintances -- and Friday's game takes on an even bigger meaning among its participants.

"If you're not hype to play a city rivalry, then something's wrong with you," New Hope senior safety Hayden Harris said.

Obviously, nothing is wrong with either team as the two prepare to play what Columbus coach Joshua Pulphus called a "memory game" against a Lowndes County rival hardly 10 minutes away.

"They'll remember this for the rest of their lives," Pulphus said.

That's why it's important to the Falcons' players to secure bragging rights for the second straight season. Columbus scooped up a late fumble in a one-score game last Sept. 27 to earn a 28-14 win over New Hope.

But Trojans quarterback Zac Butler said his team excised the contest from its mind as soon as last season ended. Butler didn't play football last year after tearing his labrum during his sophomore season, but he knows how important it was to New Hope to forget about the contest.

Instead, New Hope will look to even its record at 2-2 after last week's 13-12 home win over Aberdeen.

"It'll be very important," said Harris, who knocked away a go-ahead two-point try by the Bulldogs with 29 seconds left to seal a New Hope win. "We need it. It'll be a big boost for the team."

The Trojans will have to solve a Falcons defense among the elite units in Mississippi. Columbus hasn't allowed more than 14 points in road games at Class 4A Louisville, Class 5A Holmes County Central and Class 6A DeSoto Central.

"I think Columbus' defense statistically is probably one of the best in the state right now," Tackett said.

Tackett said his team has a game plan to crack the "stout" Falcons, and if the Trojans can achieve that, they've got a good shot. Columbus' offense has perhaps struggled more than its defense has succeeded, scoring zero, six and seven points in its three road losses.

That can be attributed to a young offensive line -- left guard Johnathon Dickerson is the only returning starter -- and communication lapses in the passing game that cost the Falcons a chance to break the game open against DeSoto Central last week. Senior quarterback Ethan Conner said he and his wide receivers are still working on getting their timing down.

But that might not be an easy fix against a "stingy" New Hope defense, Pulphus said. He credited the Trojans' talent on both sides of the ball.

"Their record doesn't dictate how good they are," Pulphus said. "Even though they're 1-2, they have been amazing so far."

Butler admitted the Trojans shot themselves in the foot with errors in losses at Houston and at home to Itawamba Agricultural. One week, the offense struggled, the next, the defense had its issues.

"We've felt like for several weeks there like we've been right there on the cusp," he said. "To win there Friday night kind of gave us more motivation to keep going the way we're going as a team."

Columbus, though still winless, feels that way, too. With the Falcons' late start to summer workouts -- they got going in early July, more than a month behind New Hope and other schools -- Pulphus said he views the 2020 season on a different timeline.

Week 1 against Louisville, he said, was like the team's spring game. Week 2 in Lexington was the Falcons' first preseason game. And last week in Southaven was a tune-up for district play.

It's why Pulphus said he sees Columbus' record at 0-0 rather than 0-3 headed into Friday. But he won't be able to say the same should the Falcons lose to their county rivals.

"As a district game, it's very important," Conner said. "We've got a chance to go out and start 1-0 in district."

The Falcons can do that against an opponent they know very well. Conner said he's friends with several New Hope players; Harris played for the Falcons' Pee Wee team and knows basically everyone who will be on the opposite sideline.

"To the community, it means a lot," Tackett said. "All these young men know each other. They grew up playing ball against each other."

That doesn't just apply to the players, either. Pulphus was an assistant at New Hope a few years before taking over at Columbus starting with the 2019 season, and he still counts several of the people he met at the school among his friends. For defensive line coach Marcus Johnson -- a New Hope graduate -- the connection is even more personal.

The rivalry, clearly, brings plenty of motivation for both schools. Tackett, though, said that excitement has been there all season for the Trojans, no matter the opponent; Friday's big game is just the next time they'll get to show it.

"These guys are just ready to get out there and compete again," Tackett said.