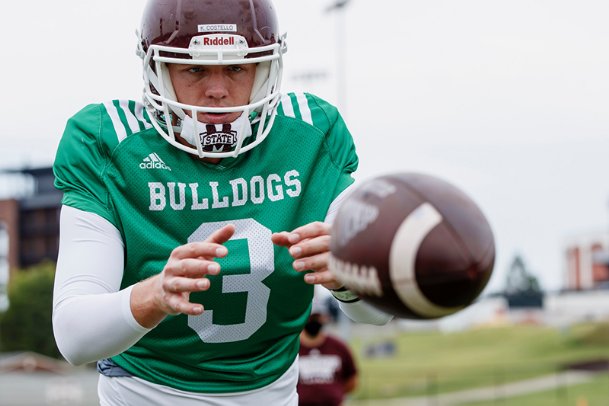 Mike Leach is expected to roll with quarterback K.J. Costello as his starting quarterback against LSU on Saturday. Photo by: Photo courtesy of Mississippi State Athletics

STARKVILLE -- The depth chart might cast some doubt, but K.J. Costello is expected to be the starting quarterback when Mississippi State opens its season against defending national champion and No. 6-ranked LSU in Baton Rouge Saturday.

Though MSU's first official depth chart of the year released Monday noted the No. 1 quarterback was Costello "OR" freshman Will Rogers, head coach Mike Leach noted Costello should likely be the starter -- following a pattern that even saw him keep an "or" ahead of Gardner Minshew II's name heading into the 2018 Alamo Bowl and days after he finished fifth in Heisman Trophy voting during his time at Washington State.

"Will's been doing a great job, but I expect K.J. to start," Leach said in his first Monday press conference of the year.

Committing to MSU in February and arriving on campus June 1, Costello has cemented himself as a leader despite his short time on campus. He and Rogers spent the majority of the summer teaching the air raid offense to the rest of the roster during player's only workouts.

Now entering a year in which the Bulldogs face a 10-game, Southeastern Conference-only slate, Costello will be tasked with guiding Leach's high-flying offense in the one-time Washington State coach's inaugural season in Starkville.

"Leach really does give the keys to the quarterback in the system," Costello said last week. "Which has been something I've been really impressed with and inspired and also know that that comes with a lot of responsibility."

Edging out senior Osirus Mitchell, MSU's leading receiver a season ago, Shavers' listing as the No. 1 "Z" receiver is as much a lesson in persistence as it is simply names on a sheet of paper. Throughout camp, flashes of the Dallas-area product's talent leaked through marketing videos, though one would have to examine the clips like the Zapruder film to draw much from them.

That said, should he have found a command of an offense he's only been a part of for mere months, there's reason to believe Shavers can stretch the field athletically in a way MSU desperately lacked a season ago and will be necessitated in Leach's system.

Beyond Shavers, Leach noted Mitchell and as many as eight receivers are expected to see time Saturday. Among them, senior JaVonta Payton and junior Austin Williams earned starting spots of their own at the "H" and "Y" receiver spots, respectively. Copiah-Lincoln standout Malik Heath and Starkville native Cameron Gardner are listed as co-starters at "X," though it remains unclear whether Heath will endure any kind of suspension due to his offseason arrest. Leach previously noted punishment was being dealt with internally.

Secondary will be young, inexperienced

For what the receiving corps boasts in depth, Zach Arnett's defense is desperately depleted in experience.

Of the 23 players listed on MSU's two-deep defensive depth chart, 12 of the players are underclassmen and five are freshman. With Tyler Williams opting out of the 2020 season over COVID-19 concerns and C.J. Morgan unavailable at the moment after undergoing offseason surgery according to Leach, the Bulldog secondary is going to be tested quickly.

Junior strong safety Londyn Craft and sophomore cornerback Esaias Furdge have both been listed as starters heading into Week One despite not boasting a single start between the pair. Behind them? Freshmen Dylan Lawrence and Emmanuel Forbes.

"I've been really impressed with how hard they play," Leach said of Craft and Furdge. "And then the other thing is they both can have a nose for the ball. They're both always around the ball."

While the personnel has changed, it's expected LSU will continue to air the ball out despite the loss of assistant coach wonderkind Joe Brady and Heisman Trophy winner Joe Burrow. LSU finished the 2019 campaign No. 2 in passing and averaged nearly 370 yards per game through the air at home. Should that trend continue with new starting quarterback and Mississippi native Myles Brennan under center, Craft, Furdge and a wildly inexperienced MSU defense should be tested quickly.