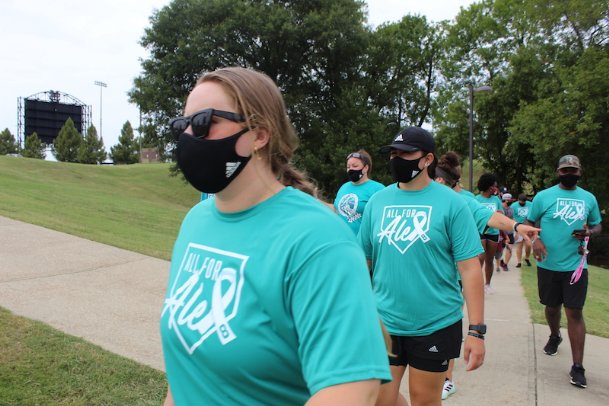 STARKVILLE -- Carter Spexarth didn't know much about ovarian cancer before she lost a teammate and friend to the disease.

Spexarth grew up in The Woodlands, Texas, where she knew a couple people around her age who had leukemia. But ovarian cancer was viewed as an "old lady disease" and never really crossed Spexarth's mind.

Then she joined the Mississippi State softball team in the same recruiting class as Alex Wilcox, a Brantley, Alabama, standout who was diagnosed with ovarian cancer at age 16.

The disease sapped Wilcox's strength, though never her fun and lively spirit. On June 25, 2018, it took her life.

Ever since, Mississippi State has honored Wilcox and has done its best to spread awareness of ovarian cancer. The Bulldogs retired Wilcox's No. 8 on Sept. 15, 2018. They wear teal, a color associated with ovarian cancer awareness, during their midweek games and adopted the slogan "No One Fights Alone."

But they missed out on the opportunity to honor Wilcox and promote knowledge this spring because of COVID-19. Mississippi State was set to participate in the Geaux Teal Ovarian Cancer Awareness Walk on March 21 before a game against LSU in Baton Rouge, Louisiana. All weekend, all 13 Southeastern Conference teams were scheduled to wear teal uniforms in Wilcox's memory. Just a week before, though, the pandemic forced the rest of the 2020 season to be canceled.

Mississippi State made up for that Saturday by participating in the Geaux Teal Virtual Walk in Starkville. The Bulldogs' coaches, teammates and staffers marched from the parking lot around Chadwick Lake wearing the "All for Alex" shirts they were slated to wear that weekend at LSU.

"I think it's special just for remembering Alex and keeping her in everyone's minds," Spexarth said.

Wilcox -- at one point, the No. 1 two-way recruit in the country -- was a regular college student and softball player who grew to dislike all the attention she ended up receiving.

"That's all she ever wanted to be: normal," Spexarth said. "I think it's kind of sad to remember her for cancer, because she was so much more than that."

Spexarth said Wilcox remains a good spokesperson and role model for people going through ovarian cancer, which 1.3 percent of women develop during their lifetime. Only 1.3 percent of that group is under 20 when the disease is diagnosed, and it can go undetected easily. Ricketts said it doesn't show up on an annual pap smear or OB/GYN visit; patients must ask their doctors to be tested for the disease -- known as "the silent killer" -- specifically.

"That's why really knowing the symptoms and knowing your body for women is such a huge piece of it," Ricketts said.

The Geaux Teal Foundation, which sponsored Saturday's walk, has done plenty to promote that. Started by LSU head coach Beth Torina -- whose mother is an ovarian cancer survivor -- the foundation sent ovarian cancer symptom cards to every NCAA Division I softball player in the country, telling them to look out for symptoms that include bloating, pelvic or abdominal pain, trouble eating and urinary urgency or frequency.

"If we can share the symptoms and prevent another young girl from going through this the way Alex did, then it's worth it," Ricketts said.

At the end of Saturday morning's practice, she tabbed Spexarth, senior pitcher Alyssa Loza and other players to address the team and tell stories about who Wilcox was on and off the field.

"We want to really make sure that every class that's here understands the impact that Alex has had on this program, on their teammates, on their coaches, and that we continue to share just how great she was as a person," Ricketts said. "I think what she did on the field just kind of exemplifies it a little bit extra. Any time she spent on the field was a bonus. She was so joyful and appreciative for the opportunity to be out there."

Wilcox's legacy is still inside Nusz Park and in the hearts of the Bulldogs, too. Ricketts pointed to her players' emotions Saturday as evidence that the loss still means something.

"She just had that big of an impact, and she was that profound with everything that we did," Ricketts said.

Spexarth said she felt the same way Saturday as the team honored Wilcox and aimed to prevent someone else from going through what she did.

"I know she's with me, and that comforts me," Spexarth said. "Bringing her up is obviously sad, but it's been two and a half years, and we're still remembering her, which makes me happy."