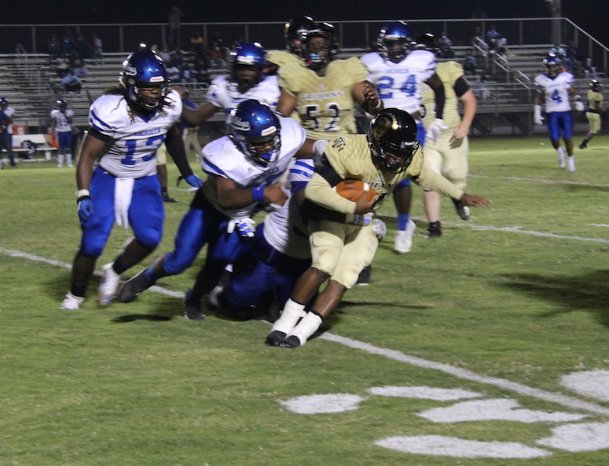 New Hope's Jalon Lucious is tackled on third down against Aberdeen in the second half of Friday's home game. Lucious was short of the sticks, leading the Trojans to punt. Photo by: Theo DeRosa/Dispatch Staff

NEW HOPE -- Hayden Harris stood over his vanquished opponent and treated his teammates to a defensive back's time-tested, go-to celebration.

Stepping away from the Aberdeen receiver still plastered to the grass in the end zone, the New Hope safety flung his arms wide as he faced his team's bench, already pouring out to greet him.

Nope, his pose seemed to signal. Not this time.

Harris batted away the Bulldogs' go-ahead two-point conversion attempt with 29 seconds left, New Hope rebuffed Aberdeen on another last-second possession, and the Trojans (1-2) snagged their first win of the season with a 13-12 victory.

New Hope coach Wade Tackett refused to comment to The Dispatch after the game, citing discussions with New Hope administration. Tackett also prevented The Dispatch from conducting postgame interviews with Harris and other New Hope players.

The senior safety's ability to knock down Aberdeen quarterback Jermaine Strong's toss to the left corner of the end zone on the two-point try was just one of several big plays by the Trojans late in the contest.

Midway through the fourth quarter, senior safety Immanuel Jones ripped the ball away from Aberdeen's Jonathan Moore and suddenly emerged from a pile with room to run. Jones took the ball down the right sideline to the Bulldogs' 16-yard line.

New Hope kept the ball on the ground from there, and after a facemask penalty helped the Trojans get closer, sophomore running back Ladarius Tate plunged in from 2 yards out for the go-ahead score.

But Aberdeen put together a lengthy drive for a chance to win. A third-down deep pass drew a flag for pass interference on New Hope, and senior wideout CJ Arnold came down with a huge catch for the Bulldogs on fourth down to the Trojans' 28.

Moore scampered to the 3 on the next play. Two snaps later, with less than half a minute to go, Xavier Young punched in a 2-yard touchdown to put Aberdeen within one. But Harris punched Strong's pass away, and the Trojans' crowd screamed its approval.

Aberdeen wasn't done, though. The Bulldogs recovered the subsequent onside kick, which was fumbled by a New Hope returner. Strong found a receiver at the New Hope 27 and spiked the ball to stop the clock with eight seconds left. He ran out of bounds with just one tick left on the following play.

But as time expired, Strong's heave to the end zone was nearly intercepted, knocked to the turf as the Trojans' defense held its ground one last time.

Junior quarterback Ty Crowell played a major rule in the victory, delivering several key runs for New Hope when the big plays were needed most. On fourth-and-5 from the Aberdeen 27 in the third quarter, he scrambled for a first down, then evaded a Bulldog and found the end zone for a tying score. Cole Crawford's extra point rang off the left upright, so the game remained in a 6-6 tie until Tate's fourth-quarter score.

Crowell also ran for a key first down late in the first half, flattening a defender at the end as he picked up a third-down conversion and got New Hope to the Aberdeen 6. The Trojans gained five yards on the next play, but a false start backed them right back up. Junior lineman Jaylon Lewis, called for the penalty, clapped his hands to the side of his helmet in frustration.

Crowell dropped the snap on third down and fell on it, and his pass on fourth down was incomplete, intended for junior Richard Guy.

New Hope went into the half trailing 6-0 after Aberdeen took advantage of its own red-zone opportunity in the second quarter. Moore picked off a pass from New Hope senior Zac Butler and got into Trojan territory, had two big runs to get the Bulldogs in scoring position, and watched as Lilton Howard scored from a yard out. Aberdeen fumbled the snap on the point after, and the play was blown up for a loss.

It was the Bulldogs' first failure to add points after a touchdown and wouldn't be the last. Aberdeen drew up a pass play after its second score in hopes of taking a 14-13 lead, but Harris knocked the ball away to seal the win for New Hope.

The Trojans are 1-2 after losses to Houston and Itawamba Agricultural in Weeks 1 and 2. They'll go on the road to face district rival Columbus (0-3) next week.