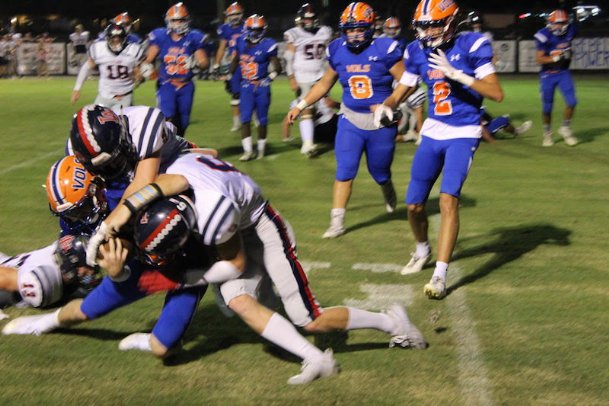 Starkville Academy quarterback Randall Futral is crunched by a gaggle of Leake Academy defenders on Friday in Starkville. The Rebels downed the Volunteers on a go-ahead touchdown run with 35 seconds left in Fridayâs shootout. Photo by: Ben Portnoy/Dispatch Staff

Throughout the ebbs and flows of Starkville Academy's 49-45 loss to Leake Academy on Friday night, Jackson was the constant presence. It was a night he scored three touchdowns and rumbled and stumbled to over 300 yards on the ground -- 204 of which came in the first half alone.

With pain in his eyes, Jackson listened to Nicholson's encouraging words.

Despite Friday's result, Nicholson remained the happy-go-lucky, upbeat motivator his dress mimics. Donning a blue visor with "Vols" stitched in orange lace tilted ever so slightly to the left and a pair of worn cowboy boots, he trotted and trudged up and down the sideline, encouraging his squad throughout Friday's shootout.

Stepping away from a referee at the 40-yard line midway through the second quarter, he pivoted toward his sideline and offered a swaggy flex toward his team. The Volunteers had recovered the second Rebel fumble of the night.

"Let's go (offense)!" Nicholson screamed, with his boots clacking across the playing surface.

For what Nicholson delivered in enthusiasm, his team responded in its play.

After the Rebels (5-0) went nearly 80 yards in the game's opening minutes for the first score of the night, the Volunteers (2-2) responded to the tune of 21 straight points.

Jackson earned his first touchdown of the night -- a 4-yard, fourth-down scoring plunge -- on the first play of the second quarter set up by a pooch kick that bounced off a Leake Academy returner and recovered by the Volunteers.

Dueling like a pair of prize fighters in the ring at the MGM Grand in Las Vegas, sophomore Whitt Welch delivered Leake Academy's knockout punch, a 4-yard touchdown run with 35 seconds left and just three minutes after Allen had seemingly granted Starkville its own right hook with a 3-yard, fourth-down touchdown run of his own.

Standing before his downtrodden squad, Nicholson preached excellence in his postgame huddle. With five games remaining on their docket, the Volunteers are still poised for a return trip to the MAIS Class 5A playoffs. A rematch with Leake Academy also feels poetically likely.

Where there was frustration and disappointment in Jackson's postgame demeanor, it quickly turned positive after a brief sermon from Nicholson. If he had it his way, the Volunteers would be on the practice field Friday night as cars spilled out of the lot behind J.E. Logan Field.