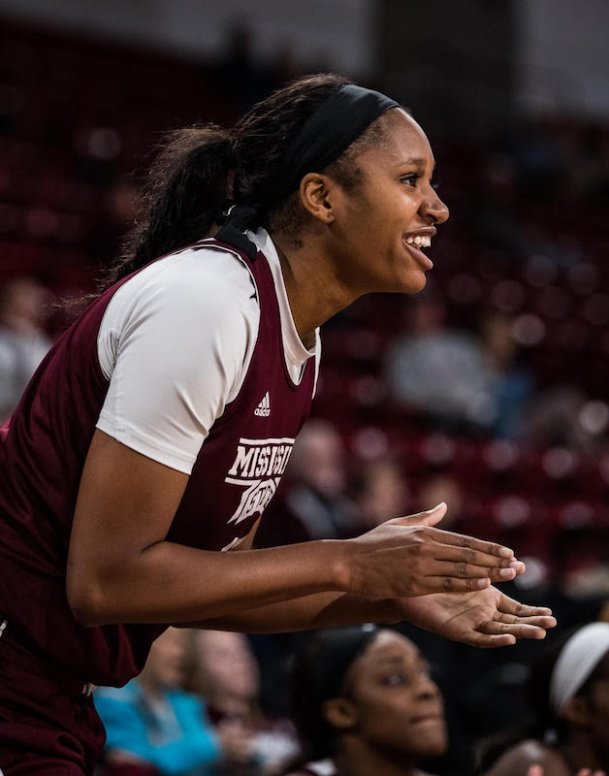 Michigan State transfer Sidney Cooks is eligible to play for the Bulldogs this season. Heading into a year in which junior Jessika Carter is likely better suited to play the four rather than a true five, Cooks should shoulder the load at center this winter. Photo by: Courtesy of Mississippi State Athletics

STARKVILLE -- All Nikki McCray-Penson has is a start date.

Speaking with the media Thursday afternoon, McCray-Penson noted that the only sliver of information she had regarding the upcoming season and Mississippi State's schedule is the Nov. 25 start date the NCAA announced earlier this week. But in a season that's slated to be anything but normal, the first-year head coach will have the luxury of battle-tested seniors to guide her inaugural squad in Starkville through its ledger.

Leading the charge is one-time Michigan State transfer Sidney Cooks. Switching iterations of MSU ahead of last season, Cooks is a former McDonald's All-American and a stretch five who can knock down perimeter shots with consistency.

Having sat out last year due to NCAA transfer rules, fans got few glimpses of Cooks beyond her shagging rebounds for teammates on game days. Despite that, the Kenosha, Wisconsin, native earned rave reviews from her teammates for her work in practices. Heading into a year in which junior Jessika Carter is likely better suited to play the four rather than a true five, Cooks should shoulder the load at center this winter.

Beyond her actual on-court ability, players have gravitated toward her off the floor. Last week Cooks was among the organizers for a student athlete-led Black Lives Matter march. Working with administrators, coaches and other athletes at MSU, she's quickly gained a powerful voice around campus and in her own team's locker room.

"Sid is someone that is very inviting," McCray-Penson said Thursday. "I think anybody, you're going to gravitate toward people that make you feel good, that are warm and welcoming, and that's what she is."

Bowling Green graduate transfer Caterrion Thompson should also aid Cooks' efforts. Arriving at MSU as the second-most-experienced player on the roster with 90 career games under her belt, she operates much like the mature conscience of the Bulldogs' youthful squad.

Like Jordan Danberry a season ago, there's a consistency about Thompson. Her work ethic and approach to the game never waver. Her actual clip behind the 3-point line is similarly steady as a career 34.7 percent shooter behind the arc, while she even managed a 41.5 percent conversion rate in 2017-18.

"She did a great job with shooting it this summer, and she's doing a great job of shooting it now that we've been back in with our team," McCray-Penson said. "She knows what she's very good at and understands that."

For Thompson and Cooks, there are, of course, unknowns. Cooks hasn't played a Division I game since her sophomore year in East Lansing, while Thompson spent the bulk of her collegiate career in a conference that boasted just one team in the top 75 of the 2019-20 women's basketball RPI.

That said, there should be help. Senior Yemiyah Morris is entering her second season with the program after spending time at Cochise College in Arizona. Morris flashed potential as a shot blocker and physical presence on the interior, and if she's able to supply in the range of 12 to 15 minutes per game, she could offer a dynamic counterpart to Cooks at the five.

MSU also boasts a plethora of talented guards alongside Thompson. Sophomore Rickea Jackson should enter this year as a favorite for Southeastern Conference Player of the Year honors after averaging 15.1 points and 5.1 rebounds per game a season ago. Classmate Aliyah Matharu also looks the part of a minute guard who can score in bunches, a belief furthered by the final five games of her 2019-20 campaign, over which she notched 15.4 points per game. This group should also include five-star freshman guard Madison Hayes and fourth-year junior point guard Myah Taylor.

Last year, now-departed head coach Vic Schaefer consistently maligned his group for their youth and inexperience. And though the team McCray-Penson inherits is still young, the leadership brought by Cooks and Thompson and the contingent of underclassmen should have MSU in contention in the SEC and come NCAA tournament time, whenever that may be.

"When you have more players that set those examples and that do things the right way, it's very important to have that," McCray-Penson said.