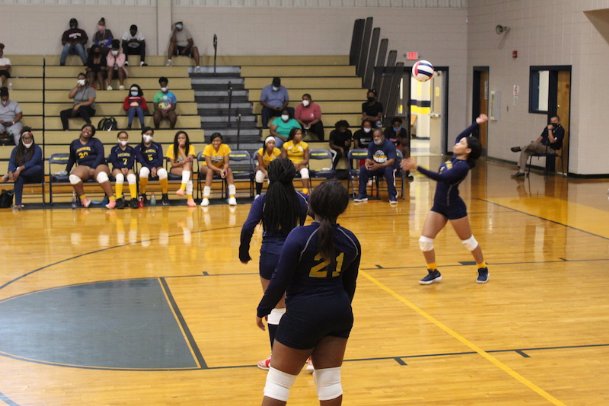 West Lowndes' JaMya Brooks goes up for a serve during the first set Thursday against Grenada. The Panthers were defeated 3-1. Photo by: Theo DeRosa/Dispatch Staff

Nenah Young and Tydajasha Hood didn't say a word when the volleyball dropped lightly between them for a Grenada ace.

The two West Lowndes seniors silently returned to their positions on the back row of the Panthers' lineup as the Chargers served again late in the third set of Thursday's match in Columbus.

"There was a lot of miscommunication, no talking," West Lowndes coach Ashley Clark said. "We've got to connect as a team."

But it wasn't all bad for the Panthers, who stormed back from a late deficit to claim the second set to even up the match against the MHSAA Class 5A Chargers.

"It was pretty intense," Young said. "It was fun, though -- especially playing a 5A team."

It was no easy feat for a Class 1A school whose roster took a hit because of COVID-19. Clark said students participating in virtual learning are not permitted to play sports, leaving her with only 13 players on her varsity and junior varsity rosters combined. Three of the six Panthers starters Thursday had never played a "high-intensity" varsity match before, Clark said.

"I could only imagine the anxiety they are having, but every game I'm seeing great improvement from the girls," she said.

Clark credited McKenzie Smart, Taylar Williams and Laquerius Ames -- the three players without significant varsity experience prior to the season -- for stepping up and "making a statement" for the school's young athletes.

"I know they will be great assets to the West Lowndes Panther nation in the future!" Clark said.

Although miscommunications like Young's and Hood's in the third set plagued West Lowndes throughout the night, Clark said the team has actually improved in that area since the start of the season.

"Teamwork and communication have come a long way since the first game," she said.

Young said those qualities were especially lacking early in sets, where the Panthers struggled Thursday night. They fell behind at the beginning of each set, and only in the second could they muster a comeback.

And what a comeback it was, too. Down 22-17, West Lowndes rattled off eight straight points, culminating in the loudest cheer of the night when the Panthers finished off the set to tie the match.

Clark said the recent return of Hood, a standout basketball player at the school, to the Panthers' roster helped with their success Thursday. Hood played volleyball for West Lowndes last year but didn't join this year's team until Wednesday's practice, and she didn't look rusty much in Thursday's match.

"It's awesome to have her," Clark said. "We need her on the team because of her movement and her communication and her skills. She's an all-around athlete."

But Hood couldn't help the Panthers as they fell behind considerably in both the third and fourth sets. Grenada won both 25-9 and walked away with a win.

It was the third straight loss for West Lowndes, but with the second set in the Panthers' column, Young said her team will have something to build off in practice going forward.

"So far, I feel like we're doing pretty good," she said.

Micaela Hudgins led New Hope with eight kills, while Daylyn Nettles had five. Madyson McBrayer and Hayslie Elmore each had two, and MaKayla Johnson, Annie Woolbright, Megan Neeb and McKenzie Murphy all had one.

McBrayer had nine aces to lead the Trojans, while Annie Woolbright had eight and Elmore and Kensley Woolbright each had four.

Kensley Woolbright had two digs, and Neeb had one.

New Hope's next match is at home Tuesday against Grenada.