'He's a problem': How Columbus' Kylin Hill and the Mississippi State running backs fit into the air raid offense 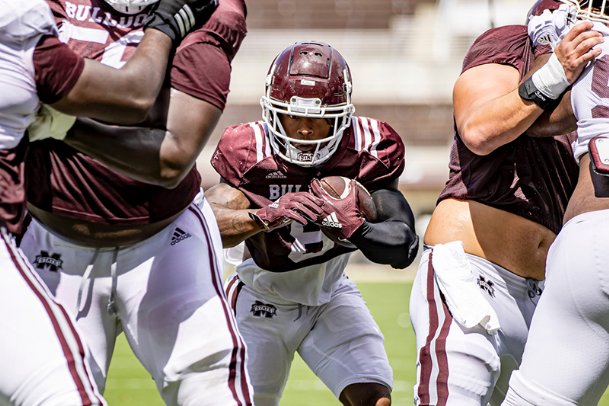 STARKVILLE -- It's almost assured Mississippi State running back and Columbus native Kylin Hill won't lead the Southeastern Conference in rushing this fall, but for what he'll lack in carries, he'll more than make up for through the air.

Leading a running back room that could go as many as five deep in 2020, there's reason to believe Hill is primed for perhaps his most complete season since arriving in Starkville as the No. 14-ranked running back in the 2017 class according to the 247 Sports composite rankings.

"Y'all know his big play ability," senior linebacker Erroll Thompson said Wednesday. "He's an (New Orleans Saints running back) Alvin Kamara type of guy. He can get it in space, throw it to him, but he can also run it. He's a problem."

Hill has flashed big-play potential in the passing game before, sure. He took a screen pass from former quarterback Keytaon Thompson 53 yards for a score on MSU's first play from scrimmage in its season-opening blowout of Stephen F. Austin in 2018. Hill also darted past an Abilene Christian defender down the seam in the second-to-last week of the 2019 regular season, taking a touch pass 88 yards to the house.

But with Hill's experience in offenses that leaned toward the run, first-year head coach Mike Leach's air raid should prove a stark contrast for his dynamic skill set and function as a measuring stick for his professional prospects.

Reneging on his entry into the 2020 NFL draft, it's widely expected Hill will need to show improvement in his receiving and pass blocking should he look to vault up boards next spring. Enter Leach.

In 2019, Leach's Washington State team attempted 710 passes -- a number that led second-place LSU by nearly 150 attempts. By contrast, the Cougars finished dead last in rushing attempts nationally with just 210 on the year, while Hill boasted 242 rush attempts himself.

As for the passing game, Hill has corralled just 44 passes for 394 yards and five touchdowns. Washington State running back Max Borghi recorded 44 catches for 398 yards and three touchdowns by Week 8 last season.

"You get an athlete like that ... it's a problem for people when we put him out in an empty formation in the slot versus a linebacker or a defensive back," Mele said of Hill. "He's either going to have the speed on somebody or the power on somebody else."

Though Hill should be the bell cow in Leach's inaugural season in Starkville, the Bulldogs' backfield should run deeper.

Freshmen Jo'quavious Marks and Dillon Johnson have both earned rave reviews throughout fall camp. Marks arrived at MSU as the 2020 class' highest-rated prospect after concluding his high school career at Carver High School in Atlanta with 6,391 yards rushing, 275 yards receiving and 554 return yards, while Johnson concluded his prep days with 1,668 rushing yards and 24 touchdowns despite splitting time with Oregon pledge Trey Benson.

Perhaps the biggest question mark of those in Mele's group is senior Kareem Walker. Taking an academic redshirt a season ago after transferring from Fort Scott Community College in Kansas, Walker earned praise from former coach Joe Moorhead's staff for his work on scout team. And though Walker profiles more as a bruiser than a pass-catcher, the former four-star recruit and one-time Michigan tailback could find a more solidified role this fall, or next season should he take advantage of the extra year of eligibility being offered to players this fall coupled with Hill's expected departure.

"He's a good teammate -- always vocal, joking, laughing around," junior receiver Austin Williams said of Walker last week. "... I've seen him out there making some plays and having success."

In 2019, just two Washington State running backs carried the ball more than 20 times all year. But with a stable of capable options both on the ground and running routes out of the backfield, it's anticipated Hill and his cohort will flash a new-look identity few MSU running back rooms in recent memory have ever sniffed.

"We can draw up plays and get you five, 10 yards -- I mean I could probably get two and a half of those five yards if you draw it up and block it up right," Mele said. "We get those guys five yards, and then they get to the second level and it's their show. It's just fun to watch those guys do what they're born and talented (enough) to do."