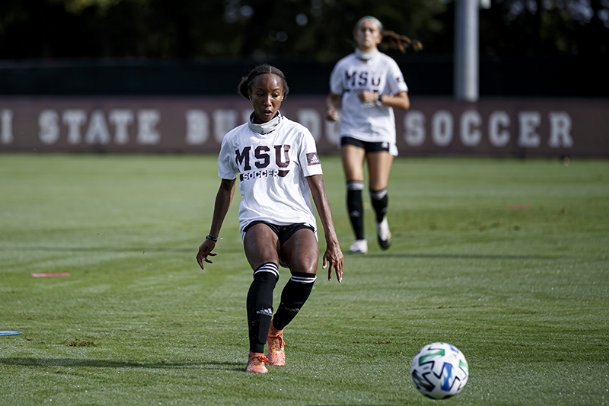 Freshman Olivia Simpson is poised to make an early impact for Mississippi State soccer this fall. Simpson enrolled a semester early and impressed head coach James Armstrong with her play during the spring season. Photo by: Mississippi State Athletics

Before each match the Mississippi State soccer team plays, Simpson grooves to the music streaming out of the speakers as she limbers up for the contest.

The freshman hasn't played for the Bulldogs long -- an early enrollee, she joined the team for its spring season before COVID-19 put an end to it -- but she's already established herself as one of MSU's most outgoing players, not to mention one of its most talented newcomers.

For Simpson -- who came to MSU from Kingsland, Georgia -- Starkville is just the latest stop. She lived in Santa Rita, Guam, from age 2 before leaving for Pensacola, Florida, prior to fifth grade. That meant a lot of introductions throughout her childhood, but the bubbly Simpson never had a problem.

"I think I was always open to making new friends, so I was just kind of the girl who walked in and would just be like, 'Hey, we're besties now,'" Simpson said. "It was never really hard."

Mississippi State coach James Armstrong said Simpson's adjustment to college has been similarly easy. The freshman is sociable, hardworking and devoted to her studies.

"She's really added to our team culture in the classroom and off the field," Armstrong said.

Couple that with Simpson's tremendous impact on the pitch, and the Bulldogs are happy to have her in the fold when their eight-game, Southeastern Conference-only season begins at 6 p.m. Friday at Auburn.

Simpson, Armstrong said, is "obviously a very talented individual from a soccer standpoint, but the thing that separates her most is her athleticism.

Simpson said the club coaches she had over the years typically found that out not long after being initially skeptical. After each move, she typically had to start at the bottom level of her new club team, but roughly every year, she'd move up a level until she got to the top.

"Coaches don't really give you a chance when you're first there," Simpson said.

She said finding new teams was perhaps the hardest part of her family's moves from Guam, a U.S. territory in the western Pacific Ocean, to Florida and on to Georgia. The transitions were brought on by her father Daniel Simpson III's transfers within the Naval Criminal Investigative Service, where he was formerly an agent and is now the "big man behind the desk," Simpson said.

She said her parents took advantage of her dad's job with NCIS -- the agency is the basis for the CBS television show of the same name -- to take Olivia and her brother, Daniel Simpson IV, on trips when they could. When they lived in Guam, the Simpsons made the eight-hour trip to Australia twice and visited the continental U.S. -- a long jaunt necessitating three flights and 24 hours each way-- every year to visit family, typically in the Atlanta area.

On the mainland for those summer trips, Simpson said, she became fascinated with the things Guam didn't have. Only about 30 miles long, the island lacked size and -- something a kid would notice -- didn't have any of the major American retailers found everywhere in the "lower 48."

Guam, with a population around 165,000, isn't tiny, though. With flat land and beaches on one side and mountains on the other, Simpson said it felt plenty big when she lived there as a kid.

"It's a small island, but it has a lot of different dimensions," she said.

Coincidentally, so does Simpson's game. Armstrong said he's not sure where the speedy freshman will play for the Bulldogs -- she's capable of making a difference at any position in the SEC, which the coach called the most athletic conference in the country.

"She's fast over a long distance, but she can also turn on the jets in just one or two steps," he said. "It's going to help her regardless of what position she plays."

Simpson said she honed those skills in Guam, where everyone plays soccer or is involved in it somehow.

"My favorite coach was also my art teacher," Simpson said.

She started playing at age 8 with recreational teams on the island, including those on Naval Base Guam. She was able to play soccer year round, too, thanks to constant warm weather on the island. The average high temperature is between 86 and 89 degrees every month, though it's typically rainy from July to November and dry from December to January.

"For my birthday parties in February, I would go to water parks," Simpson said.

After moving to Pensacola, she still played rec soccer for three years before she ever got onto a competitive travel team.

"I had to beg and plead my parents to let me do that," Simpson said.

But she stuck with it, aided when her club coach in Pensacola put in a good word for her with a Jacksonville-area club. With each year, she got better. More eyes were on her.

She starred for Camden County High School in Kingsland -- her father's hometown -- and soon, college was next up. Simpson said she looked around to find her next home, and Mississippi State was the clear answer.

"I loved the campus the first time I came here," Simpson said. "It's such a family environment, and I didn't really feel that at any other school as much as I did here."

So the National Honor Society member enrolled early, coming to campus a semester ahead to participate in spring competition with the Bulldogs. She didn't get to play long before COVID-19 hit, but her versatility and speed were on display right away against strong competition.

"Even though the spring season got cut short, it really kind of got her a step ahead of others in her class," Armstrong said.

Simpson's speed and athleticism defy her relatively small stature, Armstrong said, and they'll serve her well when the Bulldogs hit the field Friday.

"She's only 5'1", but she can jump through the roof," he said. "The athletic component that she brings to the game is on a whole new level."