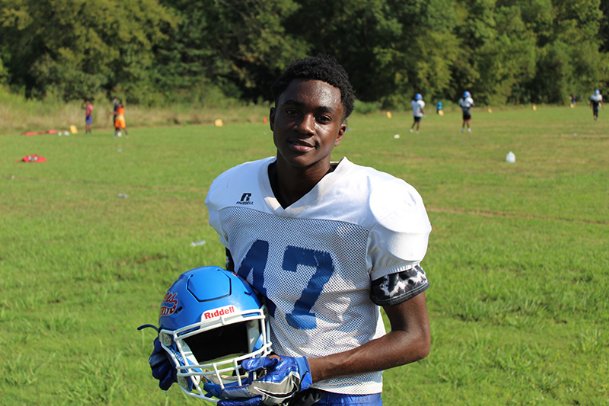 Disillusioned with football, Noxubee County sophomore wide receiver AJ Fowler walked away from football at the end of last yearâs junior varsity season. But Fowler came back to the Tigers this year and plays a big role at wideout. Photo by: Theo DeRosa/Dispatch Staff

MACON -- Speed is Antonio "AJ" Fowler's biggest asset on the football field, the quality that allows the Noxubee County sophomore wide receiver to make the game-breaking plays he routinely delivers.

It's also what could have gotten Fowler killed someday.

Disillusioned with football, he walked away from the sport last fall, already rocketing down a path that all too often leads to jail or prison or death.

Thankfully, he never got that far. Parents, coaches and teammates intervened, telling Fowler to slow down before he met those unpleasant consequences -- and not to give up on the sport he loved.

Fowler listened. He showed up to the football team's summer workouts in June with a whole new attitude, devoting himself to the sport instead of the streets.

And less than a month into the Tigers' season, he's made a measurable impact on the field and an invaluable improvement within himself.

"I've cried plenty of nights happy that I changed my life," Fowler said.

Last season, Fowler was the No. 1 receiver on the Tigers' junior varsity team.

He was talented. Undoubtedly so. But he wasn't the player Noxubee County coach Teddy Young knew he could be.

Fowler typically missed practice, only showing up for games. During those contests, he didn't respond well to coaching. He talked back. He was disrespectful.

He said it was hard for him to concentrate on sports because of his life outside of them. He hung around with his cousins and friends he'd had since he was small, and that led to bad decisions.

Late at night, with nothing else to do, they'd decide to do what Fowler called "dumb stuff" in the streets of Macon. They'd run from police, sometimes nearly getting caught.

As time went on, Fowler's attitude went south. His love for football diminished.

"I had my mind set that I didn't want to play anymore," he said.

When the junior varsity season ended, Fowler decided he was done with the sport. He didn't even tell Young.

But an eventual return to football was never gone from his mind.

"Sometimes, late at night, I'd be crying just thinking about how good I could be if I could get out of the streets," he said.

Back in the game

At one low point, Fowler's mother, Joann Harris, sat her son down for a cautionary tale: her brother's.

Fowler's uncle has been in prison since he himself was a kid, and his existence feels almost foreign: Fowler has never met him and doesn't know his name.

Harris warned her son that if he kept making the same bad decisions, he could be headed for a similar fate.

"She told me if I don't change my life, I'd be on the same road as him," Fowler recalled.

The conversation helped wake him up to what he was facing. So did his teammates.

"They told me that the way I'm living, I need to slow down because I'm not going to be able to make it," Fowler said.

The words hit home for Fowler, who was well aware of the talent he possessed. He knew it was time for a change.

So he made one.

He told his old friends he was changing his ways. They understood; that made it easier.

"They're with me no matter if I'm in the streets or playing sports," Fowler said.

He texted Young routinely, saying he was ready to be part of the team. The coach told him to prove it. Again, he did.

With the help of Johnson, a senior receiver, Fowler made it to every day of summer workouts. He was nervous at first after his time away. That quickly wore off.

"The more he came, the more he liked it," Johnson said.

Now, Fowler runs hard and gets in extra work with Rupert, the team's starting quarterback, after practice. He watches film and texts Johnson about it often. He works hard in the weight room and responds more readily to coaches' comments. He watches his favorite NFL receivers -- Tyreek Hill, DeAndre Hopkins and Julio Jones -- in hopes of reaching their level someday.

"I can tell that he's dedicated himself to being a football player and being a student-athlete," Young said.

Young said he's not surprised Fowler came back: He knew the wideout loved football: Fowler texted Young about it all the time. It was a matter of everything else, and Fowler came through.

"He had to make up his mind that he wanted to get away from the crowd he was hanging with and just make it better for himself," Young said.

So far, that decision is paying off for Fowler and Noxubee County.

In the Tigers' Aug. 28 scrimmage at Louisville, Fowler opened things with an 80-yard kickoff return touchdown. On Friday at Philadelphia, he hauled in a pass from Rupert and went down the right sideline for a score.

"Ever since the season started, he's been locked in," Johnson said.

And the people for whom it matters are taking notice, Fowler said. A couple of his friends who quit the football team in the past have thought about following in Fowler's footsteps.

Fowler said he's proud of what he did, and seeing what he's inspired just motivates him even more to keep it going.

"It makes me go hard every day," he said.