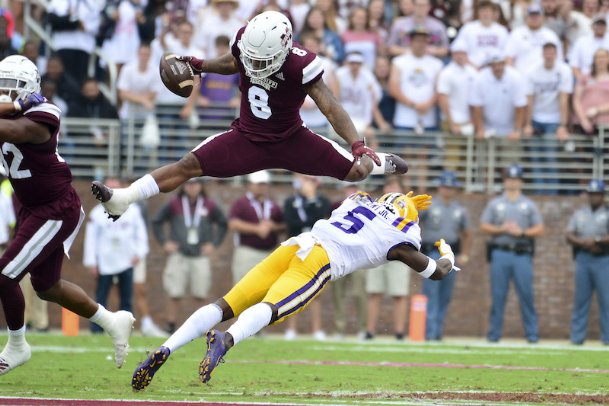 STARKVILLE -- Attempting to predict practically anything seems ill advised in the year 2020.

Reasonable minds might flat out call it a fool's errand. Yet this column is throwing that advice by the wayside.

A month ago, the likelihood we'd see even one snap of college football this fall seemed bleak. When the Big Ten and Pac-12 pulled the plug on their fall seasons, the ominous cloud grew even darker. Nevertheless, Mississippi State creeps ever closer to its season opener against LSU (two weeks, not that anyone's counting) and has appeared to have good fortune managing COVID-19. This could all change in an instant, of course, but knock on wood, it's pretty likely the Bulldogs will be kicking off in Baton Rouge as scheduled.

Given the circumstances, this calls for a lighthearted, probably totally inaccurate season prediction column! There will be plenty of time for in-depth breakdowns later.

It's a 10-game Southeastern Conference slate, which in all honesty might be a better product for viewers than the normal template. Either way, Mike Leach's first season in Starkville will be fascinating.

Factoring in opt-outs that include arguably the best receiver in the nation, the defending national champion's depth chart looks like a mere shell of the team that took the field and won a title against Clemson last season. Even though 25 percent of Tiger Stadium's 102,321 will be allowed in, the atmosphere won't be nearly as chaotic as it would be for a banner-raising game in normal circumstances. Considering both teams will be playing for the first time this season with no poor FCS or Group of Five school to fatten up on beforehand, the first half could be a slopfest. That probably helps the Bulldogs. Nevertheless, while the Tigers are breaking in an incredible amount of new players, they'll still be a top-tier SEC team.

If Arkansas wasn't the worst Power Five FBS team last season, it was certainly close to it. These poor Razorbacks have murderer's row for a schedule and will be hard pressed to find a win on their schedule. Sam Pittman has his hands full in Fayetteville.

This is the MSU prediction I'm least confident about. But going with the gut here. If it's any consolation to Kentucky, I'll counter with a prognostication that the Wildcats will actually throw forward passes in 2020.

It seems every year Texas A&M is incredibly overhyped. That could hold true again this year. Nevertheless, the Aggies are more equipped to win in 2020 than MSU.

Not much to say here. Alabama is Alabama, the Crimson Tide will roll, and Nick Saban will complain about his team's discipline late after committing too many penalties for his liking in a game they won comfortably. The sky is blue. Moving on.

Similar to Arkansas, if the Bulldogs can't beat up on Vanderbilt, something is going seriously wrong.

Much like the authorities in Knoxville, Tennessee, the last few days, the Bulldogs will have serious problems containing the Tigers.

There is one crossover game MSU fans were thrilled to see put on the schedule. Hint: It wasn't this one.

I don't care that both Lane Kiffin and Mike Leach are coaching in this game; it seems pretty much impossible this game could possibly be more entertaining than last year's pretend urination heard around the world. But it probably will be, because Egg Bowl.

Ah, the Bulldogs finally face a Tigers team they can beat. Missouri might be pretty solid in a few years, considering the work first-year head coach Eli Drinkwitz is doing on the recruiting trail. But considering the Tigers currently have question marks all over the roster, they could be in for a rough 2020. When in doubt with near equally matched teams, bet on the better quarterback, which will certainly be K.J. Costello.