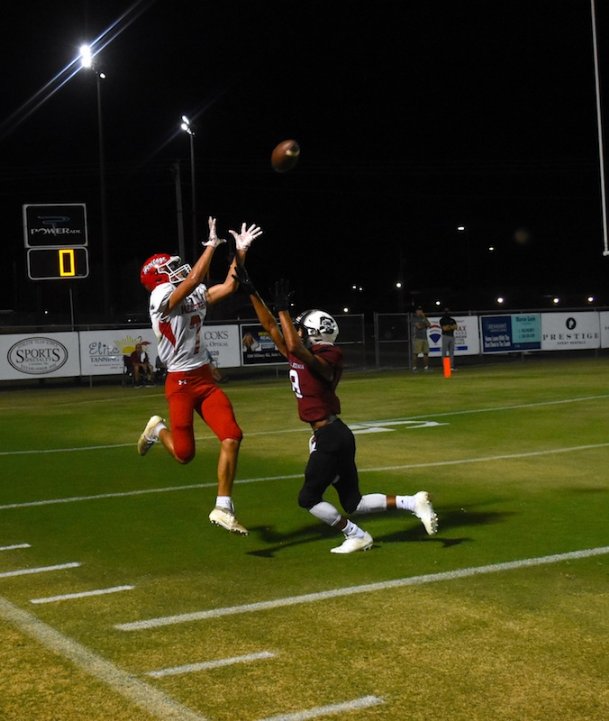 Caledonia leaned on a run-heavy, triple-option offense that resulted in early success with an opening drive touchdown. Meanwhile, Heritage Academy relied on sophomore gunslinger Mack Howard to throw the football all over the field, and in the end, the aerial attack was enough to carry the Patriots to a victory. The Caledonia football team dropped its second straight tightly contested contest, falling 28-21 to the Patriots after allowing 290 yards through the air.

"I think we really have to work on our pass coverage," said Caledonia senior linebacker Brandon Chrest, who finished with 11 tackles, two sacks and a fumble recovery. "Our defense needs to pick it up."

Caledonia (0-2) ran for 286 yards as a team but didn't attempt a forward pass until just more than 1 minute remained in the contest, trailing by a touchdown. While Caledonia only had five yards passing, the Patriots (3-1) coincidentally couldn't run the football, accumulating minus-4 rushing yards.

"We just didn't make enough plays," Caledonia coach Michael Kelly said. "We're just not making enough plays right now. We're not doing a good enough job as a coaching staff getting them in a position to make plays, and ultimately we're not making the plays we should be making. We just need to get better."

Nevertheless, a win is a win, and Heritage Academy coach Sean Harrison will take it. The coach coming off an undefeated season and a MAIS state championship had plenty of respect for his opponent, though.

"(Caledonia) pushed us around a pretty good bit," Harrison told The Dispatch. "They got in the weight room this summer. ... That's going to be a scary team when they get in shape. That's only Game 2 for them; fortunately, it was Game 4 for us. When they really get rolling, they're going to be a scary football team."

Darrius Triplett led Caledonia in rushing with 85 yards on seven carries, including a 64-yard opening-drive touchdown on an outside run. Kewon Wyatt tallied 55 yards for Caledonia on four carries, while Curtavis Johnson ran for 60 yards on 15 attempts with a touchdown.

"It's what we do," Kelly said. "We make a living on our triple option. Tip your hat to them, they made some good adjustments shutting us down. I thought they kept us off balance up front, and we weren't coming off the ball like we're capable of doing. I take responsibility for that."

Harrison said Caledonia's option-based "flex-bone" offense is never easy to curtail -- or even to plan for.

"The hardest thing to do is simulate it in practice," Harrison said. "We can't do it nearly as fast as they're doing it."

Caledonia is back in action in a road matchup against Nettleton next week.