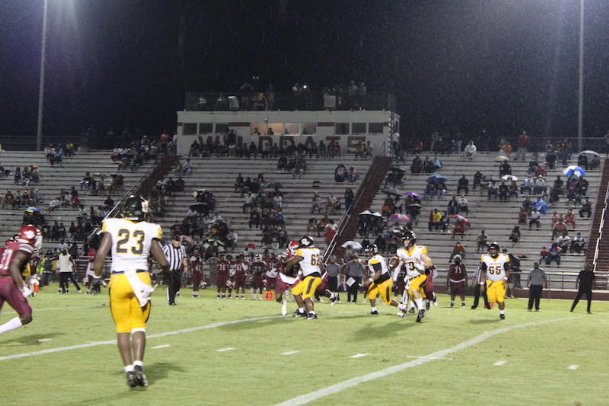 LOUISVILLE -- Starkville junior running back Jordan Mitchell cut right, brushed off a tackle and lumbered down the Louisville sideline.

Racing past the bench opposite head coach Chris Jones and the offensive staff that has turned the Yellow Jackets into an offensive juggernaut in recent years, Mitchell soared into the south end zone for an insurance score in the Starkville's 24-14 win over Louisville on Friday night.

"He just gives us a spark," Jones said postgame. "He could get more carries, and I think we need to get him more involved in the game plan. Hopefully going forward as a staff we can do a better job of getting him more involved."

On a humid and muggy night, Starkville's high-flying spread offense was bogged down by a dynamic Louisville defense. Wildcats defensive end Ty Cooper -- a three-star recruit and the No. 17 player in Mississippi according to 247 Sports -- pressed through a rather porous Yellow Jacket offensive line much of the night.

Dashing past his man as a whistle blew a second-quarter play dead, Cooper bumped into Starkville quarterback and Florida State commit Luke Altmyer as if to remind the four-star signal caller of his presence.

"My hat goes off to my defensive coaches: They had a hell of a game plan," Louisville head coach Tyrone Shorter said. "I thought we did a lot of the things, disguising coverages and stuff, that gave them problems, but we knew we weren't going to (completely) stop them."

Following a surgical display in last week's win over West Point, Altmyer was similarly effective in Friday's win despite seeing more zone coverage than Louisville's film indicated. Flashing the legs that carried him to a career high rushing mark against the Green Wave, he opened the contest with a 38-yard touchdown scamper, leaping across the goal line as a Louisville defender nicked his feet.

Battling the pressure brought by Cooper and the rest of the Wildcat defensive line, Altmyer was limited a bit through the air with little time to find targets downfield. Despite that, he still finished the night a cool 13-of-20 for 173 yards, one touchdown and an interception along with 30 yards on 10 carries.

"All across the board, they were bringing pressure on like 75 percent of the plays," Altmyer told The Dispatch postgame. "It was tough. Our offensive line being young, it was really good to handle that. That's probably going to be one of our toughest front sevens that we're going to play against."

Defensively, the Yellow Jackets were gashed for 163 yards on the ground as they coped with the losses of four starters -- including middle linebacker Keyshawn Lawrence.

With Starkville lacking push in the interior, Louisville quarterback Jace Hudspeth recycled short slants throughout the contest to move the chains through the air, while Wildcats running backs Emory James, Jaden Triplett and Jacorey Coleman also combined for 177 yards on the ground.

For Mitchell, his 65-yard third quarter run helped him to 80 yards and a touchdown on just seven carries as he shouldered the load late when starting running back and Mississippi State commit Amariyon Howard was dinged up.

"We can't make any excuses," Jones said. "I thought we fought to come back and came out with the victory but we've got a lot of work to do -- got to get better."

The Yellow Jackets return home next week to take on a Meridian team they thrashed 57-0 a season ago.