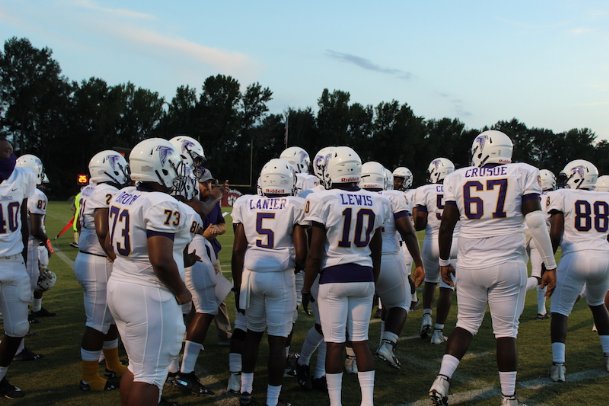 The Columbus High School football team huddles in the first quarter Sept. 4 at Louisville High School. The Falcons lost 13-0 and hope to rebound in Friday's game in Lexington. Photo by: Theo DeRosa/Dispatch Staff

If the Columbus High School football team wants to remain on the rise, games against high-level opponents must remain on the schedule.

That held true for the Falcons (0-1) last week in a 13-0 loss at Louisville and will be just as important Friday at fellow MHSAA Class 5A program Holmes County Central (0-1) in Lexington.

Wide receiver and defensive back Corey Ellington, a three-star Mississippi State commit, is explosive on offense for the Jaguars and puts his nose on the ball on defense, Pulphus said. He'll lead a Holmes County team that includes Mississippi's top-rated class of 2022 prospect -- LSU-committed cornerback Khamauri Rogers -- as well as wideout Jerell Boyd, quarterback Levi Wyatt and other talented players.

Beating a school with so much talent won't come easy for the Falcons, who went winless in 2018 before Pulphus took over and won four games last season.

Pulphus commended the Falcons for their commitment to making improvements in practice this week, understanding the mistakes they made at Louisville last week. If Columbus can fix them, the Falcons could take another step in a promising rebuilding effort.

New Hope will look to rebound from last week's 20-7 loss at Houston with its home opener against Itawamba Agricultural on Friday.

The Trojans will be facing a team that has yet to play its season opener because of COVID-19 concerns with the Indians' Week 1 opponent, Saltillo.

With a win Friday and another in next week's home game against Aberdeen, New Hope could get to 2-1 before its district opener at Columbus on Sept. 25.

Plenty of the faces on West Point's sideline these days are new, but the way the Green Wave find success in football games isn't.

"We've got to play good, clean football," coach Chris Chambless said. "Can't have any penalties; can't turn it over."

It's the same as it ever was, though West Point failed to live up to those expectations last week against Starkville. Pre-snap penalties killed drives and blown assignments on defense led to points in the Yellow Jackets' 40-28 win.

"We made a lot of mistakes," Chambless said. "We've just got to clean that up."

He'll get the chance to do that Friday at Tupelo, which lost 25-17 at Neshoba Central last week. The Green Wave swamped the Golden Wave 37-7 last year in West Point, but a physical Tupelo team that runs to the ball well on defense won't be easy to beat.

"It's going to be a tough challenge for us," Chambless said.

"They've got a great tradition," Jones said. "They expect to win championships over there."

So does Starkville, of course. It's why Friday's matchup between the two schools in Louisville is all the more appealing.

The Yellow Jackets come into the contest ranked first in MHSAA Class 6A and first overall in the state of Mississippi, having beaten West Point -- a winner of four straight state titles -- 40-28 last week.

Louisville, meanwhile, posted a 13-0 home win over Columbus last Friday. Three-star recruit Tyvoris Cooper leads a Wildcats defense among the best in the state, but Jones said he's wary of every Louisville player on the defensive side of the ball.

"We scheme for everybody," Jones said. "We're not going to focus on Ty Cooper, because they play with 10 other guys, also."

"We expect (Louisville) to come out and compete at a high level, so we've got to make sure we meet their intensity and play hard," Jones said.

"Anytime we can score points is a good day," Nicholson said.

But he said the Vols can't afford to depend solely on their offense Friday at Magnolia Heights -- each phase of the game will be equally important.

"We've got to be good at all three of them," Nicholson said.

Mag Heights brings its typical skill and experience into the contest in Senatobia, and it'll be up to Nicholson and the Vols to stifle the Chiefs' big, talented skill players.

And while getting a victory would be important for Starkville Academy down the road, Nicholson stressed that the Vols can't look ahead just yet.

"We've got to win this one because it's the one in front of us," he said.

But with a more level playing field this week, the Panthers should be just fine, King said.

West Lowndes will play at Class 1A Hamilton on Friday after beating the Lions 36-0 in Columbus last year.

King pointed out that Hamilton, too, should be worn out after its game last week, an 18-15 win at Ethel. That should help the Panthers against a Lions team that is big and physical up front and prefers to run the ball.

King acknowledged how important it is for West Lowndes to handle Hamilton on Friday and avoid falling to 0-2.

"We know we've got a good team and we've got talent," he said. "We've just got to get back on the winning track."

Noxubee County (1-0) shut out Shannon 39-0 last Friday in Macon, and yet, Tigers coach Teddy Young admitted there are several things his team still needs to improve on.

Red zone scoring is one, as the Tigers got within 20 yards of pay dirt three times but couldn't score on any of those possessions.

"I think we have to get better at punching the ball in when we get inside the 20," Young said.

Limiting big plays on defense is another thing Noxubee County needs to work on.

"We blew a few coverages; we missed a few tackles that I think we should have had."

Young said he's still not satisfied with his team, which is a pretty good sign Noxubee County is capable of something special this year.

Whether or not Noxubee County can improve in Friday's road game at Philadelphia High School should be a good indicator, too.

The Tornadoes edged the Tigers 23-22 in Macon last year on a field goal, so Young and his players are excited to have an opportunity for redemption.

"To get our chance to have revenge on them on their turf is going to be big," Young said. "The kids have been talking about it, and I think they're going to get up for this game."

And what will it take for Noxubee County to win it? It's fairly simple, Young said.

"We've just got to play better than we played last week."

Columbus Christian Academy will go on the road Friday to face the team that knocked the Rams out of the MAIS Class 2A playoffs last year.

Marvell Academy (Arkansas) hasn't performed quite as well as last year, when it reached the Class 2A title game by dispatching Columbus Christian in the semifinals. The Eagles are 1-2, and their only win was Week 1 against winless Hebron Christian.

After two weeks off, Oak Hill Academy is back in action after the start of its season was considerably disrupted by COVID-19.

Oak Hill's Aug. 28 game with MHSAA program Tupelo Christian Prep was wiped off the schedule, and the Raiders' home game against Newton County Academy last week was canceled due to COVID-19 concerns with the Generals.

Now Oak Hill will take on winless Tunica Academy on the road Friday. The Blue Devils own a 41-20 loss to Winona Christian in Week 1 and a 49-0 defeat against Kirk Academy last week.

The Hebron Christian School football team has improved in every game this season.

But the Eagles are still hoping those improvements will lead to a win.

Hebron has yet to get one this season, and it might have a solid chance against fellow winless school Delta Academy (0-3).

The Raiders have lost to the DeSoto School (Arkansas), Humphreys Academy and Sharkey-Issaquena Academy this season.

Two Mississippi schools compete in a matchup that is part of Alabama's Christian Football Association this week.

The Eagles were scheduled to host Evangel Christian Academy (Alabama) last week, but the game was postponed to the end of the season.

Pickens Academy will try to improve to 3-0 when it hosts Snook Christian Academy on Friday in Carrollton, Alabama.

The Pirates beat Banks Academy and Coosa Valley Academy in their first two games before their road game at Sparta Academy was canceled because of COVID-19 concerns with the Warriors.

Now Pickens has a chance to remain unbeaten against Snook, which owns a 65-0 loss to Jackson Academy last week.