This year's Heritage Academy-Caledonia rivalry game won't be the same because of COVID-19, but it's still got plenty to offer 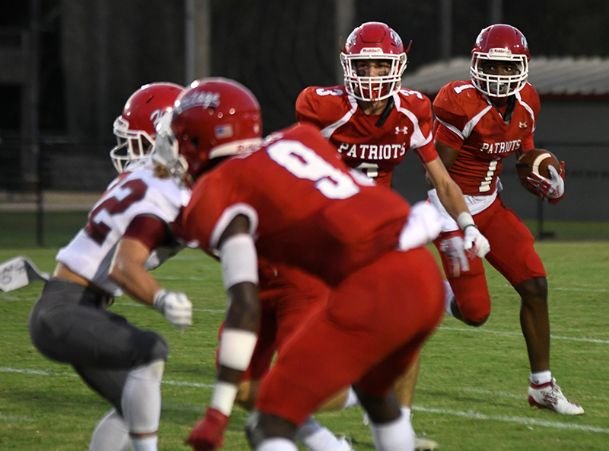 Heritage Academy's Wesley Miller (1) carries the ball down the field during a game against Caledonia High School on Sept. 13 at Heritage Academy. Miller and the Patriots' wide receivers will play a big role in Friday's game at Caledonia. Photo by: Jennifer Mosbrucker/Dispatch file photo

Patriots fans clad in all white packed the home side of the bleachers; Caledonia's supporters, dressed in red, filled the stands opposite. Heritage Academy won 32-12 and set a new school record for ticket sales to boot.

But when the two teams renew their rivalry Friday in Caledonia, Heritage Academy coach Sean Harrison admitted not much will be the same.

Caledonia's stadium will be limited to 25 percent capacity per statewide order because of the COVID-19 pandemic, meaning Friday's game won't be played with the same packed house nor the same pageantry.

"Last year was so much fun with the atmosphere and all the people here, and obviously, it just won't be the same this year," Harrison said.

But the rivalry contest still has the two things it needs -- the rivals in question. Neither team will need any extra motivation to be at their best Friday, both coaches said.

"I think the kids are excited -- obviously, playing an away game in Lowndes County is huge," Harrison said.

It's huge for Caledonia, too. After dropping last week's season opener 44-33 at Amory, Kelly said evening his team's record is critical.

"We need to get this thing back to 1-1," Kelly said. "Nobody likes losing. Our kids worked too hard. They put too much into this."

Kelly said he thought Caledonia came out flat and without energy at Amory, especially in the first half. His team built itself a hole too big to dig out of, and Kelly knows that can't happen again Friday.

"I hope we play with a little more enthusiasm than we did last week," Kelly said.

That should be no problem junior defensive lineman Antwaun Adkins, who would welcome a little revenge after coming into last year's game against the Patriots with high expectations.

"We thought we should have won, but we didn't play as good as we should have," Adkins said. "I think we've got to get some redemption."

It's something that senior lineman Reed Brewer already got last season when he transferred to Heritage Academy -- from Caledonia, naturally.

"That's my old school, so it always feels good to beat them," Brewer said.

While part of his job is to block for standout sophomore quarterback Mack Howard, Brewer said it's the other facet of his position that will be important Friday night.

"We've got to just run the ball down their throats and get some stops on defense," Brewer said.

"It was the first time in the season that I felt like we went and established a run game, which was big for us," he said. "We've kind of been waiting on that O-line to start to gel in the run game, and they did."

But Kelly said he was keying in on Howard and the Patriots' standout receivers, including Trey Naugher, Sam Hannon, Mitchell Woodard and Wesley Miller. However, his attention is tuned more to his own team than his opponent.

"Of course, that worries you as a coach, but I'm really more worried about Caledonia right now," Kelly said.

A main point of concern is a young secondary that allowed Amory quarterback Hunter Jones to toss five touchdown passes last week in the Panthers' win. But Kelly said his inexperienced defensive backs have improved since.

"I believe in them, and I think they'll play better and they'll redeem themselves this week," he said.

Harrison, too, thinks the performance was an anomaly. He pointed to the disparity in the two teams' schedules; Heritage Academy has already played three regular-season games, while Caledonia has played just one.

But Caledonia's run-based "flex-bone" option offense is already rolling. Harrison said that when he watched film of Caledonia's scrimmage against New Hope and its game at Amory, he charted only seven pass attempts in 113 plays.

"They want to go and establish the run, and they do a dadgum good job of it," Harrison said. "If we can force them to throw, then it's pretty good for us."

And although Heritage Academy won the rivalry matchup by 20 points last season, the Patriots were so dominant that Caledonia's performance was actually more than respectable.

"Last year, they had us schemed up better than anybody we played," Harrison said. "That's why I like playing them: They make me better as a play-caller."

He and Kelly talk often about the rivalry game, and though it might not have the same feel this year, there's still plenty to offer when Heritage Academy and Caledonia square off on the field.