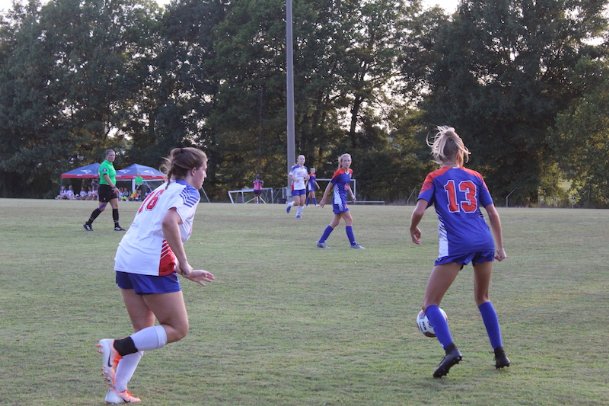 Heritage Academy's Lilly Grace Gunter (16) defends Starkville Academy's Mia Kate Cade (13) early in the second half of Thursday's match between the two rival schools. Cade scored in the second minute for the only goal of the match. Photo by: Theo DeRosa/Dispatch Staff

STARKVILLE -- Before he addressed his bench at the end of Thursday's home match against Heritage Academy at the Starkville Sportsplex, Starkville Academy girls soccer coach John Morgan hunched over for a second.

When he straightened up, the relief on his face was clear as day despite the evening shadows.

The Volunteers had survived.

Starkville Academy (11-3-1) managed to fend off Heritage Academy 1-0 on Thursday, scoring in the second minute and holding onto its narrow lead for the next 78-plus -- even when it looked doubtful.

"It wasn't our best game, but we got the win, and that's all that matters," Starkville Academy junior Mia Kate Cade said.

It mattered quite a bit, as the Vols improved to 4-0 in district play with the win and finished off a season sweep of the Patriots. Starkville Academy could finish in the top spot in its district with victories over Lamar School in a home-and-home series on Sept. 22 and Sept. 24.

"We want that No. 1 seed spot," Cade said. "We've got momentum going into them to get the wins."

Without Cade -- who Morgan described as a free kick expert -- the Vols might not have that momentum. The junior drew a whistle less than a minute into the match and curled her shot over Heritage Academy goalkeeper Haven Tuggle early in the second minute for Starkville Academy's first score.

"We set a goal before the game to score in the first five minutes, and we scored in the first two, so, pretty good," Cade said.

It turned out to be the Vols' only score, too, despite opportunities at time for seniors Lauren and Kaitlyn Bock to add to the lead. But time after time, their shots were blocked or saved or driven wide.

That made things tight for Morgan and Starkville Academy. The coach said he thought at halftime if his team could score one more time -- a "security goal" -- the Vols would be just fine.

Instead, they had to sweat it out. With less than 10 minutes to go, Heritage Academy brought everyone but Tuggle up to the front in hopes of scoring. The Patriots were awarded a free kick close to the goal when a Starkville Academy defender fell on the ball, but they couldn't cash in.

A few minutes later, the final whistle blew. Starkville Academy had "weathered the storm," as Morgan put it.

"I don't know if it was to keep the suspense high or what, but it was way too close for comfort today," he said.