'He plays with his hair on fire': How Aaron Brule is adjusting to Zach Arnett's blitz-heavy scheme 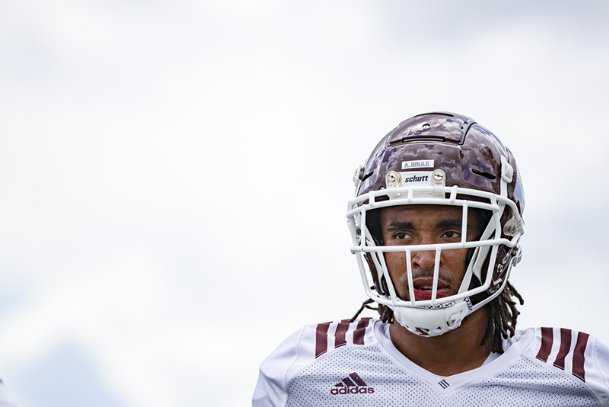 With just more than two weeks before its first game, thereâs reason to believe Brule is set to be a linchpin in Mississippi Stateâs free-flowing defense. Photo by: Photo courtesy of Mississippi State Athletics

STARKVILLE -- Aaron Brule stands hunched over a podium in the Leo Seal Jr. Football Complex bearing an effervescent smile from ear to ear.

Speaking a mile a minute, Brule races through his thoughts on new defensive coordinator Zach Arnett's 3-3-5 scheme, what's stood out through fall camp and how he's approached an offseason in which he's slated to become a major cog in the MSU defense.

And while the Bulldogs are still a little over two weeks away from opening their season at LSU and at least a week and a half short of disclosing their first depth chart of the year, there's reason to believe Brule is set to be a linchpin in Arnett's free-flowing defense.

"The thing I really appreciate about Brule is he plays with his hair on fire on a daily basis," outside linebackers/special teams coach Matt Brock said. "There's not many plays where you flip on the tape and Brule is not playing hard."

With Willie Gay Jr. beginning his NFL career Thursday night as a member of the Kansas City Chiefs and seniors Tim Washington and Leo Lewis now departed, MSU's linebacking corps is slim beyond fifth-year senior Erroll Thompson. There are options at SAM, sure. Copiah Lincoln Community products Jordan Davis and Tyrus Wheat should both see time this fall. But inside, next to Thompson, playing time is up for grabs. Enter Brule.

Listed as a hybrid safety/linebacker on MSU's fall roster, the New Orleans product came to MSU in the class of 2018 with smoke that he might end up in the defensive backfield. Having bolstered his frame from 220 pounds on arrival to a slim 230 pounds at present, he's played in 17 games over parts of two seasons in Starkville.

"I think up to this point it's what makes most defensive guys successful: effort," Arnett said of why Brule's been effective in practice. "He shows up every day to work, and he flies around and gives it everything he's got."

Shifting from a 4-2-5 under Bob Shoop to Arnett's 3-3-5, there's an expectation that linebackers in the present system will be tasked with more blitzing this fall.

Brule -- who's spent the majority of his time at MSU as a run stopper and athletic defender in space -- noted Tuesday night that his latest role has been an adjustment. He's spent more time chasing running backs in space and rushing the passer than under previous regimes.

Working to rep out this adjustment, Brule said he and the rest of the outside linebackers have spent ample time hitting tackling dummies, racing around trash cans and working on angles to boost their awareness in Arnett's blitz-heavy scheme.

"Coach Arnett's defense is definitely different than what I'm used to, and it puts me in some much better positions," Brule said. "...I'm able to play the run and also drop into coverage, and I feel like it's expanded my game a lot more than in the past."

Speaking with the media Tuesday, Arnett was brutally honest regarding his defense's present progress through three weeks of camp. Has it improved? Yes. Is it where he hopes it will be come game time in Baton Rouge? No. That said, Brule has been among the bright spots in an otherwise lacking performance this fall.

Bringing an energy evident in his swift speaking nature, there's reason to believe the redshirt sophomore linebacker will be heavily leaned on in a linebacker room in which he's far and away the second-most-experienced piece alongside Thompson.

"Even if I may mess up or something, I'm still just giving 100 percent," Brule said. "It's better to make a 100 percent mistake than a lagging mistake."

"I've really enjoyed being a part of coaching him and just his day-to-day approach," Brock added. "Obviously he's still working through things, but whether it be technique or fundamentals or the system, but first and foremost he plays the game hard, and that's what you appreciate about Aaron Brule."