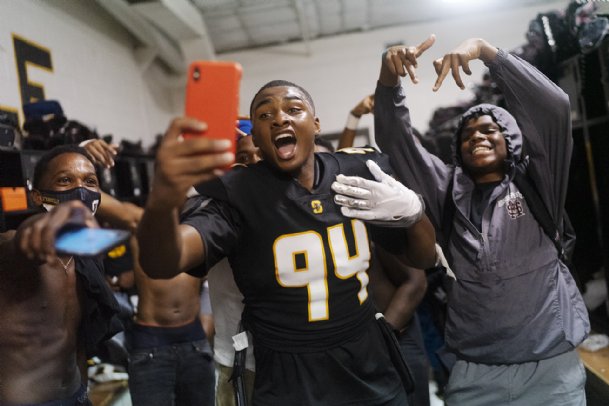 Seconds after West Point running back Jakobe Pate notched the night's first score with an 81-yard scamper, Altmyer flashed unfamiliar afterburners as he raced past the Green Wave defense for a 74-yard touchdown run of his own.

"We've been watching film all week; we thought we had it," he said postgame. "They had one linebacker in the box. Right as we snapped, he budged, and the rest was history."

A four-star Florida State recruit whose sterling right arm carried Starkville (1-0) to the MHSAA Class 6A semifinals a season ago and boasted 454 career completions entering Friday's 40-28 win over West Point (0-1), Altmyer flashed a nuanced -- albeit shortened -- performance for a quarterback billed for his pro-style potential rather than his dual-threat inclinations.

Having graduated its top four receivers from last season -- including current Mississippi State wideout Rufus Harvey -- questions have swirled as to how Altmyer would replicate his past success. With an offseason spent in quarantine due to the ongoing COVID-19 pandemic, Altmyer and his new crop of receivers time to work out on their own both at Starkville and at MSU. Trotting out for their first collective contest together in their respective roles, the new-look Yellow Jackets offense silenced its critics in short order.

Altmyer's first pass of the night looked the part of a quarterback who completed at least 60 percent of his passes in all but two games a season ago. Dropping, setting and firing, he flipped a ball up the right sideline, over the inside shoulder of a West Point defensive back and into the hands of a streaking Stacy Robinson for a 47-yard strike.

Flashing the legs that carried him to the first score of the night on the final play of Friday's first half, Altmyer capped off a 14-of-19, 286-yard opening 24 minutes by dipping out of a tackle, rolling to his left and connecting with Robinson for the pair's second score of the night as the clock hit zero.

"He's a sneaky athlete," Starkville head coach Chris Jones said. "It's not that he can't run; it's that he chooses not to run. ... Your best quarterbacks are ones that extend plays and use their legs when needed."

Yellow Jacket Stadium held its collective breath as Altmyer, planted into the turf near the Starkville 7-yard line, was helped to the locker room with a severe cramp minutes into the third quarter. Returning to the bench with just over eight minutes remaining in the fourth quarter before resuming duties under center, he looked on as the Yellow Jackets' swarming defense stripped West Point quarterback Corbin Kelley and scooped the ensuing fumble for the game-ending score.

"I'm a little sore, you know, it is what it is," he said through a braced smile. "Calf just exploded."

For a game that annually draws in over 10,000 fans, Friday night also served as a semblance of ordinariness for Altmyer and his teammates. After Gov. Tate Reeves passed an executive order this week limiting stadium capacities to 25 percent, Starkville Athletic Director Greg Owen told The Dispatch the school sold just shy of 1,700 tickets to reflect Yellow Jacket Stadium's 7,000-person stadium seating capacity that climbs to over 10,000 when standing-room patrons are accounted for.

Stepping toward the fence on the home side as his team headed toward the locker room postgame, Altmyer shared words with a slew of Hawaiian shirt-clad classmates who spent the night in a COVID-19-induced limited cheering section.

Nights like Friday's are dwindling for the senior signal-caller, who is slated to graduate in December and enroll at Florida State in January. Rated the No. 198 prospect in the country and the No. 13 pro-style passer in the 2021 class, Altmyer has continued to receive interest from Ole Miss and Alabama, though he remains firm in his pledge to Florida State.

Friday night wasn't perfect. Altmyer would've liked to have played all four quarters. Drops and other miscues also endured. But in a world continuing its fight against once-in-a-century global pandemic, Altmyer's clinical performance brought some normalcy to an otherwise vexing year.

"I was talking about it on the sideline -- I was like, 'There's no way there's 25 percent (capcity),'" Altmyer recounted with a chuckle. "I was so excited. It felt normal for the first time in a while."

3. 'When World War II ended, it wasn't as big a headline as we had today': Revisiting Mississippi State's 1980 upset of No. 1 Alabama COLLEGE SPORTS