'It's different, but I guess it's still football season': Southern Miss falls to South Alabama as FBS football returns 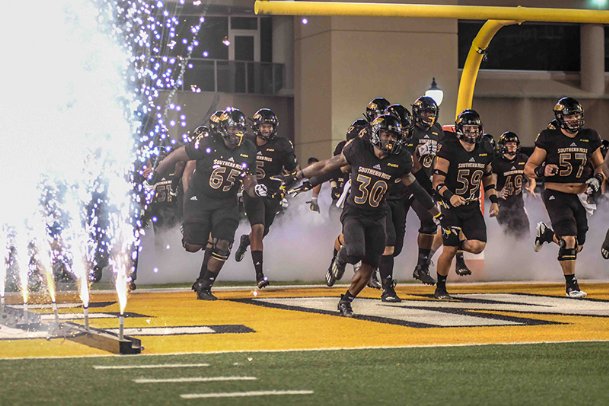 The Southern Miss Golden Eagles run onto the field at M.M. Roberts Stadium for their game against the South Alabama Jaguars Thursday in Hattiesburg. Photo by: USA TODAY Sports

HATTIESBURG -- It's been 28 years since Billie and Billy Roberts first called section H, seats No. 1 and 2 home on Saturdays in the fall.

Both 1969 graduates of Southern Miss, the pair met during their junior years in Hattiesburg -- dating for one quarter, separating for five and getting together for their final few months on campus before marrying on May 1, 1970.

Living in nearby Biloxi and, more recently, in Gulfport, following a three-year spell in Johnson City, Tennessee and a one-year stint in Asheville, North Carolina due to Billy's work as a kinesiotherapist for the U.S. Department of Veteran's Affairs, the couple has spent the better part of the past four decades making the hour-and-15 minute trek in their dekked out mobile home for game days.

Having retired their tailgate on wheels two years ago with their ages creeping past 70, Billie shook her black and yellow tinged pom-pom viciously, while Billy hunched over a walking cane courtesy of the full hip replacement he endured 67 days ago Thursday night. Inching toward the edge of her seat as South Alabama's Jalen Tolbert dashed down the Southern Miss sideline for a 73-yard touchdown reception, Billie reamed her alma mater.

"Tackle him!" she exclaimed through a deep southern drawl as her pom-pom came to rest. "Aw shoot. That was not supposed to happen."

Five days since FCS foes Austin Peay and Central Arkansas quelled the rabid palettes of college football faithful with their season opening showdown last weekend in Montgomery, UAB became the first FBS team to officially kick off its year just an hour prior to the festivities in Hattiesburg.

But for a Southern Miss team that's notched winning seasons in 23 of the past 26 years, the national spotlight afforded by Thursday night's 32-21 loss to South Alabama in the first contest between two FBS teams this fall is a microscope that's proved rare.

There have been spurts of attention, sure. Brett Favre carried the Golden Eagles to a No. 18 and 23 ranking in the Associated Press Poll in 1989 and 1990, respectively. More recently, Larry Fedora guided Southern Miss to the winningest season in school history in 2011 with a 12-2 campaign he later parlayed into the head coaching gig at North Carolina.

"We've had winning seasons and then (head coach) Ellis Johnson came in and ruined that all," Ethan Boykin, 21, contended in reference to the Golden Eagles' winless 2012 campaign that saw Johnson relieved of his duties after just one year.

Just 21 years old, Boykin estimates it's been 17 years since he first attended a game at M.M Roberts Stadium. But wandering a mostly empty concourse on the fifth floor behind the press box, the images of fans spilling into aisles that night proved a fading memory.

Two weeks ago, Gov. Tate Reeves announced stadiums in Mississippi would be limited to 25 percent amid COVID-19 concerns. Donning a shirt colored the same yellow that spattered the stands Thursday night, Boykin and his black-and-yellow clad family did their part in combating the bizarre optics of a stadium that held 31,706 Golden Eagle faithful in last year's opener, while other reminders of the ongoing pandemic were sprinkled throughout the stadium.

Hand sanitizer stations were posted at most every gate. Floor stickers marking socially distant spots were scattered throughout. Face coverings were worn by all in the press box, on the sideline and those who milled about the empty corridors.

"It's weird -- very, very weird," Boykin said of the spacious openings spread about the hallways and concourses of M.M. Roberts Stadium. "It's different, but I guess it's still football season."

Now heading into his fifth season at Southern Miss, head coach Jay Hopson has largely continued the winning culture started by his predecessors, yet Thursday's contest looked the part of a game played under the most uncanny of circumstances.

Frank Gore Jr.'s stalled rush at the goal line was promptly pitched to senior quarterback Jack Abraham for a would-be-touchdown that was called back as Gore's forward progress was stopped. A mishit punt preceded it. Both plays were capped by Briggs Bourgeois' grotesquely shanked field goal with 14:04 remaining in the fourth quarter that would have kept Southern Miss within a score.

Helmed by Abraham and aided by a trio of receivers including West Point product and former East Mississippi Community College standout Jason Brownlee -- who caught five passes for 54 yards -- the Golden Eagles combined for 409 yards of total offense in their steamy and sloppy season opening affair.

"I think we just kept shooting ourselves in the foot," Abraham said postgame. "Started with a penalty and really never got into a solid rhythm."

In the weeks prior to the season opener, Southern Miss Athletic Director Jeremy McClain's stomach churned with uncertainty.

For weeks, nights like Thursday night felt more hopeful than plausible. One by one, the Mid-American, Mountain West, Big Ten and PAC-12 conferences postponed their seasons. In Hattiesburg, seven players opted out of the season entirely, while the offensive line dealt with its own slew of positive COVID-19 tests according to the Biloxi Sun Herald.

"It's been quite the winding road, a roller coaster, however you want to describe it," McClain told The Dispatch on Wednesday. "There have been some days that are better than others and there were times during the summer that I definitely didn't think that we would be here talking about a game."

As the country continues its wayward bout against a global pandemic of biblical proportions, McClain's previous uncertainty proved, to his delight, for naught Thursday night. Football returned not only to the Magnolia State, but the entire FBS.

"This is what it's all about," Billy said. "...Southern Miss brings back a lot of good memories."