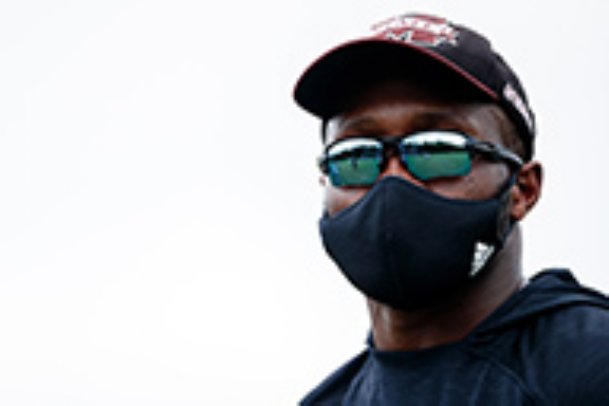 Following a five-year NFL career that spanned four teams, a three-year run at his alma mater St. Lucie West Centennial High School in Port St. Lucie, Florida, and a one season spell under former head coach Dan Mullen at Florida, Chaney has promptly carved a niche on a staff long on experience, but short on MSU ties.

"We wanted to get Jamar back home," Emerick told The Dispatch. "He played here, had a great career here, played in the NFL. (He's a) young guy, a lot of energy players relate to."

Given his official title, Chaney's on-field responsibilities are limited by NCAA rules. Despite that, he's quickly developed an acumen on the recruiting trail rooted in his time as a high school coach.

Taking over a St. Lucie West Centennial team that struggled to a 2-7 record in 2016 while he served as the defensive coordinator, Chaney began a cultural overhaul of the program that sprung forth his own career.

Players and coaches would be treated like college athletes and staffers. Practices were expected to be up-tempo and purposeful, with sporadic full-pads work. Even the players' practice pants were cut shorter to mimic the tight cut donned daily by college teams.

Off the field, Chaney worked to drum up support from a previously apathetic fan base. He developed a booster club to help fundraise and host events in the community. The school even shifted its annual scrimmage from its home stadium to a local park, hired a DJ and let fans in for free to bolster awareness.

Calling a parents meeting ahead of their inaugural season, Chaney and his staff were anxious. Only 10 people had shown up to the meeting the year before Chaney arrived. Scanning the crowd, there were now more than 50 patrons in attendance.

"They saw his energy," then-defensive backs coach and co-defensive coordinator Codi Vick told The Dispatch. "They heard through the phone, they saw it through our Twitter posts, they saw it through everything we were doing in the community that this isn't the same Centennial that he played for or the previous years. It was a different type of Centennial."

With excitement enveloping Chaney's revival, players followed. Vick, who worked as a quality control coach at Florida Atlantic prior to joining the staff, estimates the Eagles secured three or four transfers in Chaney's first fall. At least five or six more followed the next season -- including current MSU freshman Jamari Stewart -- and another two were added even after Chaney left to become an assistant coach at Florida.

Boasting a roster that would send five players to the Division I level coupled with a culture of toughness and discipline that mimicked that of Mullen's program during his time in Starkville, Chaney guided Centennial to a 5-5-1 record with three losses by seven or less points.

A breakthrough 7-3 season followed in 2018 -- giving the Eagles their first winning season since 2004 and first playoff appearance in seven years.

"It was nuts really," said Aaron Gluff, Chaney's then-linebackers and strength and conditioning coach. "...This area that we're in is loaded with talent. It was just a matter of time before somebody came around that took advantage of it, used it and did it the right way. I mean, obviously he moved on to bigger and better things, but it's one of those things that if he would've stayed here I think it would've kept going higher in the right direction."

Following Chaney's two-year run as head coach at Centennial, Mullen hired him as the assistant director of football operations in Gainesville. In his role, Chaney kept high school coaches informed on happenings at Florida, recruited running backs, linebackers and offensive linemen and operated as the first line of contact for the staff.

He also sat in on meetings with defensive coordinator Todd Grantham and linebackers coach Christian Robinson in hopes of gaining added experience.

"The information that you get, it was new to me," Chaney conceded. "It really taught me a lot about recruiting, the process of evaluating guys, doing your own homework, because a lot of schools will offer guys because other schools offer them. And I think it's there's high value in truly, truly evaluating guys, looking at their film, trying to get in contact with their high school coaches to find out about them...make sure you're getting not only the talented players, but the right character players in your program."

Now back in Starkville for his first professional spell with the Bulldogs, Chaney has delivered a vast impact on the recruiting staff held over from Joe Moorhead's tenure and those that have since joined as part of Leach's contingent. His general responsibilities include recruiting the defensive side of the ball, though he notes he's recruited most every position on the field. Chaney also boasts added credibility on selling the program as one of the few staffers in the recruiting office that played for MSU.

Most recently, his name has appeared in slews of tweets from prospects receiving offers and interest from the Bulldogs as Sept. 1 marked the first day coaches could contact 2022 prospects under NCAA rules.

"He brings that realness that needs to be in college football, especially now," Vick said. "These kids, they're calling out fakeness...So when you've got a guy like Chaney that is real with you at all times and is honest with you and he legit cares about you, that does great for kids who want to follow."