'You've got to show me': How Mississippi State's assistant coaches are shifting the team's mindset toward success 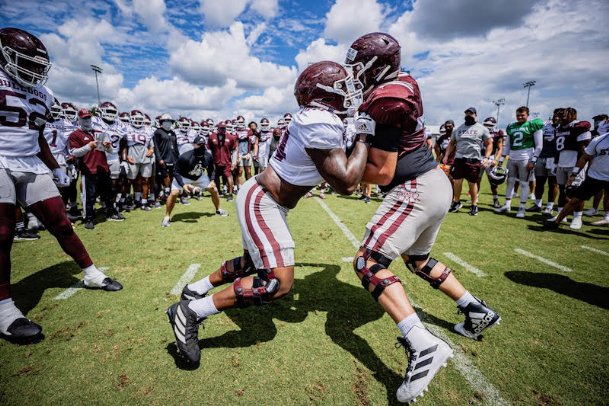 The Mississippi State football team starts each practice with the "bull in the ring" competition. Players stand five feet apart before colliding, and the winner is the man left standing. Photo by: Courtesy of Mississippi State Athletics

STARKVILLE -- Gathered in a circle on the practice fields behind the Leo Seal Jr. Football Complex, first-year head coach Mike Leach offers his team a daily sermon of sorts. Motivational and determined. Exciting and angsty.

After Leach's fiery wordplay, two players are siphoned into the center of the circle for battle. As players collide off five-yard head starts, the clacking of shoulder pads sends those in the outer circle into a frenzy as one player hits the ground and the other stands victorious.

"Everybody cheers, yells, gets fired up," Leach said Saturday of beginning each day with the drill better known as "bull in the ring," "one-on-one," or "the circle drill."

Starting each day with a daily dose of crunching hits, there's an air of intensity about practices in Starkville these days. With the waves of change being steered by a head coach who fancies himself an aficionado of 18th-century swashbucklers, The Pirate's first staff in Starkville has brought with it an attitude and mindset that seeks to build a winning culture in its earliest days.

Take receivers coaches Steve Spurrier Jr. and Dave Nichol. Spurrier Jr. -- the son of the famed Florida and South Carolina coach of the same name, who was never one to mince words -- spoke last week of the impact the tight ends-turned-wide receivers have had in practice and how their playing time resides in doing their jobs. More specifically, he turned to the fit of blocking stalwart Dontea Jones and his role in an offense primed for pass catchers in a transparent but productive tone.

"Dontea is a likable young man," he said in a voice that eerily mimics his father's. "He's not a great player, but he's a pretty dang good one, and he knows who he is and knows what his strengths are."

Nichol, too, boasts the same refreshing honesty. Posted at the podium Wednesday night, he explained how tennis ball drills and extra work on the JUGS machine have aided in the development of MSU's inside receivers. He also revealed that for every drop, players are tasked with 10 up-downs on the spot. If failed catches continue, added drills after practice ensue.

While there are layers to whatever disciplinary measures coaches impose, Nichol and this coaching staff's approach differs from those that preceded them. Their chief objective is winning football games, but it's also rooted in maintaining motivation amongst a group of 18-to-22-year-olds who, when left to their own devices, remain kids at heart.

"When you ask kids, 'Are you tough? Do you have pride? Do you love football?' I mean, the answer is always going to be yes, but you've got to show me," Nichol said last week. "I think I said this when I first got here, and I don't think they think this, but there's a perception that just because we're here, you're going to show up and walk out of the locker room and have 70 catches for the year, and that's just so inaccurate."

There's also a level of coaxing and guidance to what Leach's staff is teaching in its first year in Starkville. Sophomore defensive tackle Nathan Pickering noted Thursday there's a consistent dialogue and layer of purpose to each teachable moment with new defensive line coach Jeff Phelps. Rather than expecting a whistle in one's ear or constant tongue-lashings, Pickering describes Phelps' approach as though it's a constant push and pull between father and son.

The lone holdover from Joe Moorhead's staff, Tony Hughes is heading into his fifth decade in coaching since he was honorably discharged from the United States Marine Corps in 1984. From Philadelphia and Hattiesburg high schools to Hinds Community College to a three-year spell as the head coach at Jackson State with stops at Ole Miss, MSU and Southern Miss scattered between, there's little in the Mississippi football world Hughes hasn't seen.

Now working with his third head coach in his second spell at MSU, he noted the winning culture Leach's staff has sought to bring with it from Pullman to Starkville.

"There's a reason that (Leach) has been a big winner at other schools," Hughes said. "And it's because of the way he runs his program: The assistant coaches -- the guys that came with him -- are all on one page and know what he wants, when he wants it, how he wants it."

For years, Leach has thrived on building winners in the most remote of Power Five football outposts. Prior to his arrival at Washington State, the Cougars were 9-40 in four years under Paul Wulff. After going 3-9 in his first and third years with a 6-7 campaign sandwiched between it, Leach finished his final six years in Pullman with a record of 43-22, including the school's first ever 11-win season in 2018.

Now heading into his first fall at the helm in Starkville, he and his assistant coaches are adapting the apathetic culture that surrounded the football program toward the tail end of the 2019 campaign.

"I think (one) of the things that is exciting about coaching is discovery -- discovery of what someone is capable of," Leach said at his introductory press conference in January. "Because a lot of time they're discovering that the same time you are. Everyone can work harder than they think they can, and everyone is a little better than they think they are."