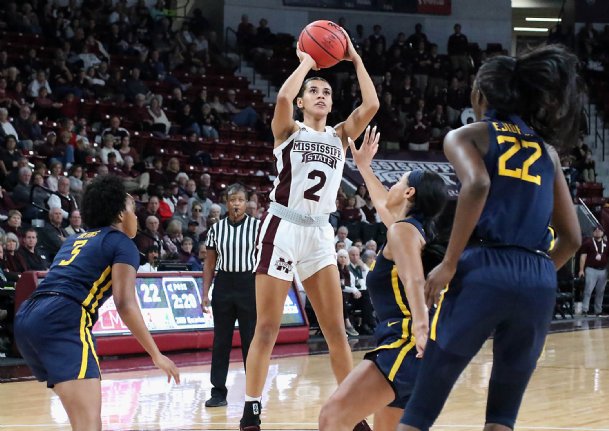 Andra Espinoza-Hunter takes a shot against West Virginia on Dec. 8, 2019 at Humphrey Coliseum. Photo by: Jim Lytle/Special to The Dispatch

STARKVILLE -- Mississippi State senior guard Andra Espinoza-Hunter is opting out of the 2020 season over COVID-19 concerns.

Espinoza-Hunter announced her intentions via Twitter Sunday afternoon, writing: "After considerable thought and long discussions with my family, I have decided it is in my best interest to opt out of the upcoming women's basketball season due to COVID-19 concerns. To my incredible teammates, who are my lifelong friends and will forever have a special place in my heart, I am going to miss playing with you all this season, but I'll be cheering you on as you chase your dream of bringing Mississippi State its first National Championship."

A one-time UConn transfer, the New York native would have been one of three seniors on the 2020 roster including Bowling Green graduate transfer Caterrion Thompson and Yemiyah Morris. In two seasons at MSU, Espinoza-Hunter played in 77 games -- including 20 starts -- and averaged 6.9 points and 1.1 assists per game. She also boasted a prolific 36.7 percent clip from 3-point range.

"I fully support and respect Andi's decision to opt out this season," MSU coach Nikki McCray-Penson said. These are difficult times, and personal health and safety is of the upmost importance to us all right now."

The Bulldogs are heading into their first year under the guidance of McCray-Penson following longtime coach Vic Schaefer's departure to Texas earlier this offseason. MSU finished the 2019 season 27-6 with a run to the Southeastern Conference Tournament Finals.

In March ESPN ranked MSU No. 3 nationally in its Way-Too-Early Top 25 for the 2020-21 season behind South Carolina and Stanford.