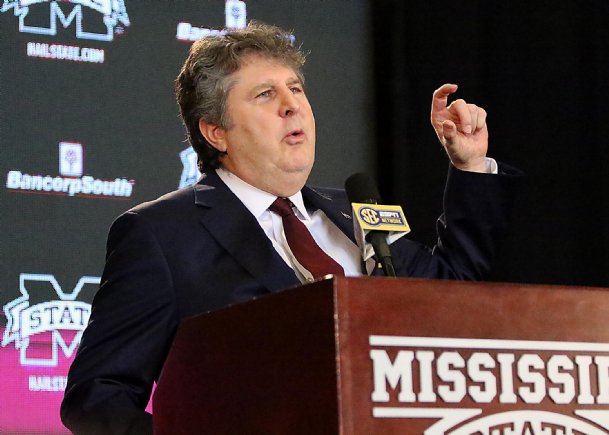 Reportedly holding offers from over 30 schools in all corners of the country, Nabers whittled down his choices to Mississippi State and Georgia in recent weeks, before ultimately picking the maroon and white clad Bulldogs as his college destination Tuesday.

And while Nabers' commitment was met with widespread acclaim both in Starkville and from numerous national recruiting pundits, his pledge also represented a shift in identity for a school that has long struggled to reel in top-flight offensive skill position talent.

Since Dan Mullen took over the program in 2009, MSU has enrolled just seven four-star wide receivers. Now heading into the tail end of the summer recruiting period with 12 commitments in the class of 2021, first-year head coach Mike Leach's inaugural class boasts two of those seven aforementioned receiver prospects in Nabers and Texas standout Theodore Knox -- marking the first time in the 247sports Composite era that the Bulldogs have secured pledges from two top-250 receivers in the same class.

Perhaps as striking, MSU's four highest-rated recruits according to the 247sports Composite -- Nabers, Knox, four-star quarterback Sawyer Robertson and three-star receiver Brandon Buckhaulter -- all play on the offensive side of the ball.

"If you're an offensive player and you don't want to come play in Leach's offense, I mean I think that's kind of crazy," MSU defensive analyst Jamar Chaney told The Dispatch Wednesday.

During Mullen's nine-year run as the head coach in Starkville, the Bulldogs were known as much for their gritty defense and blue-collar, hard-charging mentality as their offensive acumen -- finishing outside the top-60 in total defense just twice between 2009 and 2017.

A similar culture, albeit to less success in the win column, persisted into Moorhead's tenure between the 2018 and 2019 seasons as the Bulldogs boasted the nation's No. 1 total defense during the 2018 season.

By contrast, Leach's Washington State teams led the nation in passing four times and finished in the top-35 in the country in total offense five times in his eight seasons in Pullman.

"The quarterbacks and receivers are together almost the entire practice," inside receivers coach Dave Nichol said in February of Leach's system. "We don't sit there and have 20 minutes of an individual drill. We're throwing and catching in some form most of the practice and because of that (the receivers are) going to run more routes than they've ever even dreamed of."

At the high school level, Robertson became the highest-rated quarterback to commit to the Bulldogs in more than 15 years when he pledged in late March. The Bulldogs also signed Starkville High School standout and one-time Arkansas State commit Rufus Harvey in February after the 5-foot-10, 167-pound local corralled 1,066 and 16 touchdowns on 75 receptions as he helped the Yellow Jackets to an appearance in the Mississippi High School Activities Association 6A semifinals.

Entering the 2020 season, no player in MSU history has ever passed for more than 4,200 yards in a season, while Fred Ross and Mardye McDole are the only Bulldogs to ever notch more than 1,000 receiving yards in a season -- marks five Leach led quarterbacks and four receivers surpassed during his time at Washington State alone.

Still a year away from suiting up at Davis Wade Stadium, it's expected that Nabers, Robertson and Knox will put up numbers few have reached or even dreamed of at MSU. But as pressing, their commitments reflect what's come to be a cliched selling point for Leach's programs -- the offense sells itself.

4. EMCC opts out of fall football season because of virus COLLEGE SPORTS