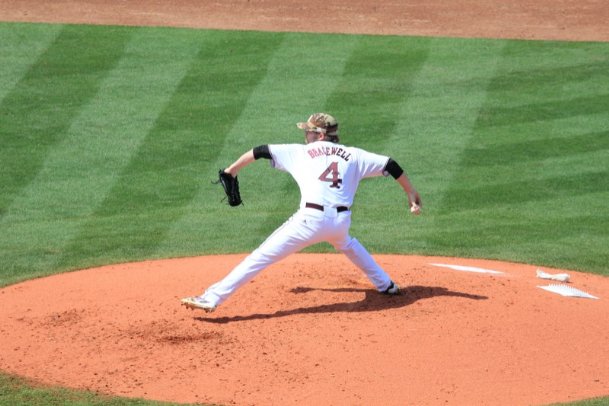 Ben Bracewell has spent the past six seasons as a member of the Oakland Athletics' minor league system. Photo by: Mississippi State Athletics

After six seasons in the Oakland Athletics' minor league system following a standout career at Mississippi State, Bracewell received a call-up to the A's 60-man player pool late last week. Having just arrived in San Jose -- the site of Oakland's reserve team -- the former Bulldog caught up with The Dispatch Wednesday night to discuss his recent call-up and how he's stayed ready for his major league moment.

Ben Portnoy: Well Ben it's been a few months since we last talked, but what have the last 48-72 hours been like since you were selected for the Athletics' 60-man player pool?

Ben Bracewell: "So I got called on (Thursday) of last week. Basically basically told, 'Hey, we told you it would happen quick and here we go. Hope you're ready.' I'm like 'Yep.' ...Then I was on a plane Friday and got out here Friday evening. ...Then I had to go through a screening and testing and all that stuff on Saturday so we can't really do anything until our test results come back. So I was in the hotel room from Friday evening until, I guess, until really about Tuesday morning because I found out I was negative Monday and then was able to go on the field yesterday and then was in a ball game and threw two innings today."

BP: Now that you're with the A's, what's that been like for you making that jump from Triple-A to the major leagues?

BB: "It's been good. To be completely honest, I was anticipating being out here from the start, so it was a pretty big letdown when I wasn't on that list. I personally felt like I should have been here from the beginning, but nonetheless, I'm here now and making the most of it for sure. I'm excited. Ended up getting a lot more a lot more time with my wife during summer months, which is obviously a rarity -- took advantage of that and enjoyed that for sure.

BP: You mentioned throwing a couple innings on Wednesday, how did you feel and what was that like?

BB: "It felt good. I never stopped throwing so if there was no real ramp back up for me as far as being ready for the game. I've been throwing to hitters at least once a week for about a month now, at least -- a month or two. Physically I felt fine, I felt normal. I was obviously excited to, to be back in a more competitive environment where the pitches mean a little more. I definitely enjoyed that aspect of it and it felt good."

BP: When we last talked over the summer, you said you were throwing off a makeshift mound, what's it been like being back in a professional setting? The mounds a little more shored up?

BB: We were throwing off that homemade mound. Matter of fact, that guy, Kyle Finnegan, he debuted for the Nationals a few nights ago. So that was really fun, you know, the guy I trained with all through that quarantine period to be able to watch his debut was really cool. But yeah, anyways, once he left I started throwing to hitters, like I said, once a week or so, so I was able to get out on dirt for those outings to kind of get back in the swing of things. But I will say that the mounds back here in, you know, the professional setting are much nicer. So that's, that's been nice today, especially just to be on a really good mound, good slope, all that stuff.

BP: Being a Triple-A guy heading into this season and with minor league ball canceled for 2020, how did you go about your offseason and the training side of things?

BB: "Yeah that was definitely different. We were all in that same boat and so I guess everybody, for a while, was in the same deal as far as we had no clue what is going to happen. There's all the negotiations back and forth and a lot for a while we were kind of wondering 'Is the season even going to happen?' The only thing you have to do there is, is just keep your head down and keep going. Because, you know, just like packing for a trip, you'd rather have something and not need it than need it and not have it. So be ready. And stay ready, just in case and worst case scenario there's no reason to be ready. So we just kind of kept the mentality that we would get the call any day and training with that intent to be ready to go and pitch in a ball game whenever they needed it."

BP: So was the basic approach just treating it like an extended offseason?

BB: "Yeah, I would say we kind of comboed the offseason with in-season stuff. It was obviously more structured than in-season just due to the fact that we got to pick when we threw. So we kind of had an offseason structure to it in terms of when we threw, when we lifted and all those things but took more of an in-season approach in terms of lift after we throw, do arm care after we throw and maybe take it down just a notch in the weight room that way, we're putting more emphasis on the on the throwing side."

BP: You kind of touched on it there, but how different was that process for you as a pitcher compared to a position player, given you've got arm care and pitch counts to monitor?

BB: "Yeah, it changes a little bit. For me personally my goal was to -- and this is what I communicated with all of our pitching coaches as well -- my goal during that time was to put myself in a position to where I could jump into a short to long relief role right away. So I structured my quarantine time around building myself up to that 40-ish pitch mark, and then keeping it there. So that kind of limited me to two outings a week basically for that time. So we obviously structured the workouts around that and made sure that I kept my pitch count up. It benefited me because I'm able to show up here and then, like I said, immediately, day two being here, jump in and throw two innings."

BP: Now that you are in that position you hoped for earlier this year of jumping from Triple-A to the majors, how big of a, for lack of a better term, relief is that for you?

BB: "Yeah, it's refreshing for sure. When I get called to come out here I'm not sure if it was more excitement or relief, to be honest with you, because when you're sitting on a couch, and there's guys out here playing ball it's easy to immediately go to the negative there -- which is like 'What does this year look like after me? What does free agency look like? What do all these different options (look like). Maybe this is it, who knows?' So it's easy to go down a negative road there. So I'm definitely happy to be here now. It is refreshing. It's relieving, like I said, and it's exciting now just knowing that the way especially the way things are right now anything could happen. You see what happened to the Marlins -- I mean, gracious. I wouldn't wish that on any other team, of course, but things can happen quickly and I'm really excited to be in a position to where hopefully I'll be one of those guys that they consider bringing up."

BP: Being in that 60-man player pool, what are the next steps for you as things get going into the main portion of the regular season at the MLB level?

BB: "I think step one was more or less accomplished yesterday and today -- which is just getting back into the swing of things. It's kind of tough sitting literally in the same room for over 72 hours, not being able to do anything and then all of a sudden go out and be active. Your body's just not in a good position to go out and perform there. So yesterday and today getting back in the swing of things and getting off to a good start I think I can check that box now. And then next for me is honestly just to continue with the physical side of things -- staying in shape, keeping my arm in a good healthy position, staying after it in the weight room, just continuing to be in a good physical position. And then, from a pitching standpoint, my next step or my goal is to just find things to get better at -- continue to find little things here and there that I can improve in my game that way, if and when that call does come, I'm as sharp as I can be."