After disappointing 2019 season, Pickens Academy football hopes to 'come out a lot stronger' 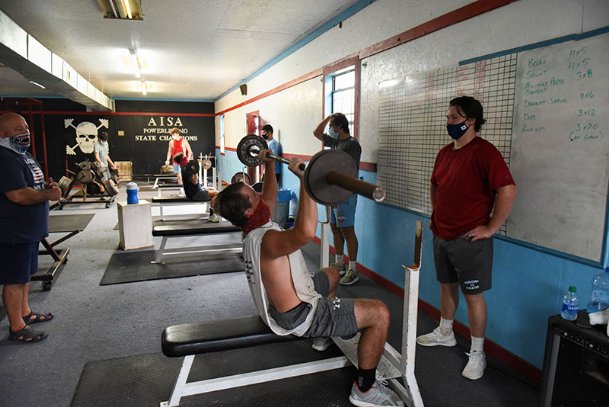 CARROLLTON, Ala. -- The Pickens Academy football team is ready to change its past.

The Pirates suffered several key injuries, never got things going and finished 2-9 last year, head coach Scotty Pennington's first at the helm. They don't want anything like that to happen again.

"We know what we did last year, and we're not happy with that outcome," senior running back William Parker said. "We're going to do better this year."

With almost 10 seniors, the return of every member of last year's starting offensive line and the implementation of a new offense, Pickens feels optimistic that it's got the pieces in place to achieve that goal.

"We're going to come out here with experience," senior right tackle Tyler Britt said. "We're going to at least have a foot on the ground and know where we're going."

That could be a challenge with several tough opponents on the Pirates' 2020 schedule, including defending Alabama Independent School Association Class 1A champion Southern Academy, which left Pickens behind in 1A and moved up to 2A this season. Games against Patrician Academy, Jackson Academy and South Choctaw Academy will be other big tests for the Pirates.

"I'm looking forward to those bigger games so that we can show them what we really have, show them our improvement from last year and the years before," junior running back Will Noland said.

Despite delays to the fall season announced by several states, including a two-week postponement announced by Mississippi public schools July 14, Pickens' season is on as scheduled so far. Pennington said the team has a "pretty good schedule" and that his players are anxious to compete.

"It helps out that the players are looking forward to it, and they've got it in their minds they can do some big things this year," Pennington said. "That's one of the good things: that they see it as an opportunity to make something happen."

Noland said he and his teammates, dedicated to that cause, have felt themselves getting faster and stronger and being able to run longer since workouts started in June. He feels an experienced team starting to come together.

"I think we'll have a lot of improvement this year," sophomore quarterback Aidan Johnson said. "We'll come out a lot stronger."

The Pirates' new "flex-bone" offense, a triple-option system, should play a big part in that. Pickens ran it before Pennington took over the team, and the Pirates' older players still remember the system, designed to spread out the defense.

Noland said early returns on the "flex-bone" system -- which Caledonia High School also employs -- are positive. He said the new offense will play to Pickens' strengths even though the Pirates are one of the smaller teams in the area.

"I think it's going to really improve our blocking and the way that we can maneuver the ball through the gaps," Noland said.

Parker, who has also lined up at quarterback, wide receiver or wherever any team puts him, said he expects the new system to help the Pirates this fall.

"We can kind of put people where we want to with this offense, and I think it will be good for us," he said.

Part of a talented offensive line -- Pennington said the Pirates have "pretty good linemen for a school this size" -- Britt admitted the new offense has been a bit of an adjustment but one he's looking forward to.

"We've been trying new things to try and figure out what does and doesn't work, and this seems like it's going to really work," Britt said.

Junior fullback and linebacker Chandler Box said a veteran Pirates' defense should be solid, too.

"We build on each other," Box said. "We always know all our strengths."

Pickens lost several key players from last year on both sides of the ball, including running back and defensive end Jon Wesley Rye, outside linebacker Clark Noland and running back and quarterback Seth Peeks. But the Pirates expressed optimism that they can fill those holes.

"They were definitely three of the best players on the team last year, but I think we have some people who are going to step up and take their spots," Parker said.

Britt acknowledged that won't be as easy as it sounds, but he thinks Pickens can do it.

"They were a big part of the team, but there's always somebody who can replace them," Britt said. "It's going to take a little while to get used to it, but I think we're going to be alright."