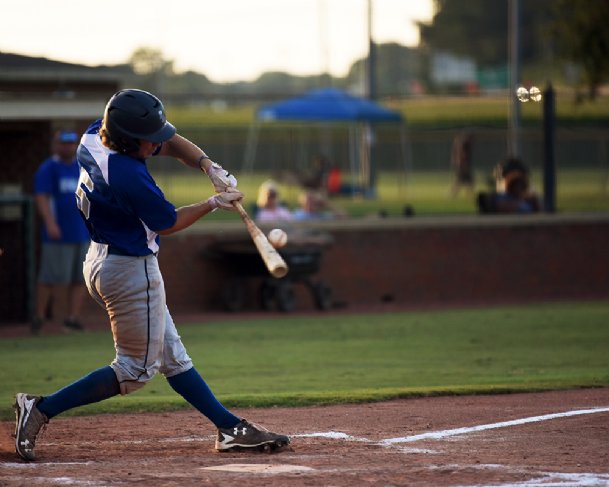 Miller Hancock (5) of the University of West Florida University hits the ball during the third inning at a summer league baseball game earlier this month at BNA Bank Park in New Albany. Photo by: Antranik Tavitian/Dispatch Staff

It's where the graduate of East Webster High School in Maben planned on playing in a summer baseball league after his junior season at the University of West Florida wrapped up.

But the COVID-19 pandemic had other plans for Hancock. After starting 19 games for the Argonauts this spring, Hancock's junior season was cut short, though he'll get a second crack at it next year. His hopes of playing summer ball in Virginia were dashed, too.

So Hancock turned to the Cotton States Baseball League in New Albany, where he'd spent the summer once before. He knew the quality of the competition was up to par, and he signed up.

But he never expected to be placed on a team with 11 players from the Golden Triangle area. That's right: More than half of the Hill Country Generals hail from Caledonia, New Hope, Heritage Academy and Oak Hill Academy alone.

Eight of the local Generals are incoming freshmen, while the other three are rising sophomores, so Hancock didn't know any of his summer league teammates coming in. He quickly got to see that the area players on the team knew each other well and associated often. Many of the Generals played together or against each other in Little League and travel ball since age 8.

"They stick together," Hancock said. "They're good kids."

But the team's Golden Triangle players haven't excluded everyone but the players with whom they grew up as teammates or even rivals. Cade Stacy, who graduated from Caledonia in 2019, said joining the Generals offered him similar opportunities to make new friends as did heading off to play at Meridian Community College.

"It's always fun meeting new people, just like when I went to college," Stacy said. "You meet friends who you'll know forever and probably never forget."

Seth Harris, who graduated from Heritage Academy this year and will play for East Mississippi Community College, said he knew New Hope players Ryan Burt, Presley Hall and Stallone Shelton but not many others on the Generals roster. He said the ability to meet new teammates and to play at a higher level of competition to prepare for college baseball is what makes the CSBL appealing.

"It's a new experience for me since I've been playing high school, but everybody welcomes you, and it's a good time," Harris said.

Generals coach Jeffrey Cook said that good time is occasionally interrupted by rivalry smack talk -- Caledonia/New Hope debates in the dugout aren't uncommon -- but that the atmosphere is friendly overall. Competition in the CSBL runs Friday through Monday, and five or six Golden Triangle players stay in Oxford each weekend and carpool together on the 40-minute drive.

"It's nice to see these guys step up and play together," said Cook, who coached baseball at Columbus High School for eight years. "I watched them grow up, so it's kind of fun."

Hancock said he's been instructing the Generals' plethora of younger players how to handle the infield, with two recurring themes: "Play hard and run everything out." His advice seems to be working, as the team has improved plenty since the start of the season June 6. A last-ditch comeback effort against the DeSoto Xplorers on June 10 earned the Generals a 4-3 walk-off win and gave them a winning record on the season.

"As it goes on, we're slowly molding together," Hancock said.

That goes for both the players from the Golden Triangle area and the new friends they've found on the field.