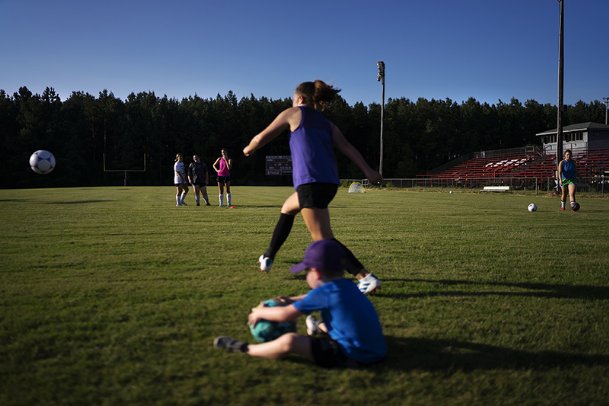 Cassie Carter kicks the ball during a drill as Ridge Swain, bottom middle, 5, plays with a ball during soccer practice on July 16 at Columbus Christian Academy. Photo by: Antranik Tavitian/Dispatch Staff

Earlier this month, the Mississippi High School Activities Association postponed the start date for all athletic events by two weeks. Late Monday night, reports surfaced that all Jackson Public Schools will be canceling all fall sports in the coming days.

To this point, the Midsouth Association of Independent Schools has yet to follow suit. Under MAIS guidelines, prep soccer, softball and volleyball can all start games as soon as this Friday.

Locally, the Starkville Academy girls soccer 5 p.m. season opener against St. Aloysius remains on as scheduled for Friday in Starkville. Volunteers coach John Morgan said players remain optimistic, and while he hasn't heard of any plans to delay or cancel any season, he believes the situation itself remains fluid.

"It's going to be an interesting season, that's for sure," said Morgan, whose team had a scrimmage with Starkville Homeschool on Monday. "...I think (the players are) pretty excited. I really think they're ready to go," Morgan said. "That's one of the hard parts. I was talking to a dad that's with the Starkville Parks Association, it's going to really suck if we work this hard and come all this way and then they change things."

"It's like the one thing you want to go out strong in," Tipton told The Dispatch. "Not being able to would be soul-crushing."

Morgan said no changes have been made for attendance policies, though Starkville Academy will encourage spectators to socially distance.

"There hasn't been a definite change to policy just yet. We just needed to just make sure that everybody is being cautious while they're out there," Morgan said. "We're going to have signs out there that will essentially say everybody is at their own risk. Everything as of right now is still good. For how long, we don't know."

At practices, Starkville Academy has been taking temperature checks consistently. Morgan said if a player shows symptoms they're responsible for staying away from the team until the symptoms are up. If a test is pending, that player in question still has to stay away.

Morgan said if a player tests positive on a team, additional tests will need to be conducted for players that were suspected to be around the positive individual.

"If a player tests positive, we'll go from there."

Heritage Academy girls soccer, which plans to start its season on Aug. 3 against Starkville Homeschool, is also planning for an on-time start.

Meanwhile, two MAIS football coaches confirmed to the Dispatch last week they are unaware of any plans to delay a season. Practice for MAIS football began Monday afternoon, with most area private school teams scheduled to kickoff on Aug. 21.