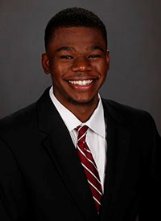 Last season with the Crimson Tide, Davis averaged 6 points and 3.8 rebounds per game while shooting 59 percent from the floor in 31 games played.

It is unclear whether the 6-foot-9 forward will have immediate eligibility or will have to sit out a year, but regardless, he will have three years of eligibility remaining for MSU. If cleared to play right away, he factors to play a key role in the frontcourt along with Abdul Ado and Tolu Smith.

Davis' biggest game of the season last year came against South Carolina, where he recorded 20 points and 10 rebounds for his first collegiate double-double.

The Bulldogs are now up to 12 scholarship players on the roster. They could potentially add a 13th depending on whether or not Robert Woodard II returns to MSU or elects to stay in the NBA Draft. Woodard II has until Aug. 3 to decide which route he will go.

2. Football has been EMCC's 'livelihood,' but Lions must adjust to a new way of life for now COLLEGE SPORTS

3. EMCC opts out of fall football season because of virus COLLEGE SPORTS