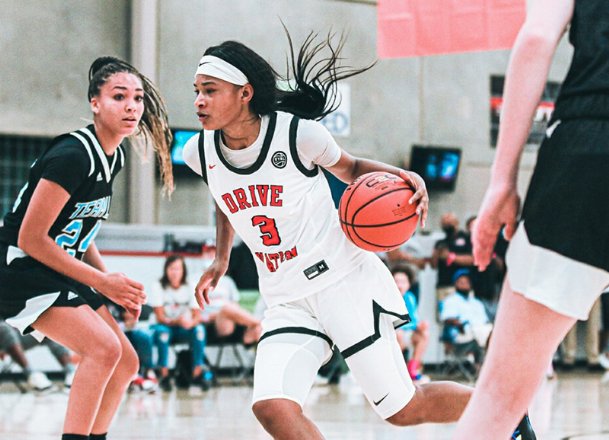 After watching two 3-point shots rattle out of the rim during the first half of a recent game, Shavers felt the confidence she so steadily relies on as a knockdown shooter begin to falter.

"Don't hold your head down and don't stop shooting because we've worked on that shot 1,000 times," 19-year NBA veteran and former Lady Drive Nation under-17 coach Jason Terry told Shavers, pulling her off to the side. "You are a shooter and you need to have that shooter mentality."

Subbing back into the contest, Shavers responded by promptly knocking down five 3-pointers in the second half en route to a double-digit scoring output in her first game with Terry along the sidelines.

Just one of the pair of prolific former players guiding Shavers through her prep career, Terry and former Texas standout Edwina Brown have given the sharpshooting Texan a roadmap to developing the mental side to her dynamic offensive abilities as she progresses toward a collegiate career in Starkville.

"I think the mental state is the base of basketball," Shavers told The Dispatch. "So once I get that down, then I'll be solid."

Shavers' father, Chris, quips his daughter has been competitive since her youth. She began playing basketball at five years old. Slews of games and tournaments followed, only adding to her competitive nature.

Working with Brown as part of the EYBL Lady Drive Nation 2020 squad, Shavers has boasted an overwhelming ability to knock down shots from long-range. Brown recalled a game earlier this year in which Shavers received a kick-out with her team leading by five or six and time dwindling down. Rather than move the ball around the perimeter as Brown had hoped, Shavers spotted up and drained a 3-pointer from NBA range.

Turning toward her coach, Shavers began to laugh as the ball splashed through the iron.

"It goes in, and I grabbed my heart like, 'Oh my gosh,' Brown said. "I almost had a heart attack."

"I would say, if she had to hang her hat on something she's just a flat out shooter," she continued. "She has extended range -- I'm talking about two, three steps past the 3-point line, getting in the NBA range."

While Shavers' long-distance inclinations have made her coach's heart skip a few beats, this summer has offered a chance for Brown and Shavers to get to know one another on a deeper level.

Brown moved over to the prep side of coaching in recent years following spells as an assistant coach at Texas and TCU. Instilling the same passion and drive it took her to become the No. 3 overall pick in the WNBA Draft in 2000 and onto a seven year professional career, she's helped Shavers work toward developing an all-around offensive arsenal both inside and out.

"I definitely want to work on and finishing stronger around the rim with both my right and left hand," Shavers noted of her recent work on the court. "I sometimes avoid contact, but when I get that down, I'll be great."

Terry has also proved an invaluable resource to Shavers on and off the court. A former NBA champion with the 2011 Dallas Mavericks and the 1999 Pac-10 Player of the Year at Arizona, Terry has spent time coaching Shavers from the sidelines and in one-on-one sessions.

Like Brown, Terry offered her a look at what training toward the collegiate and professional levels would take -- a process not lost on Shavers' father.

"She grew tremendously in one summer just learning how to practice, how to train like a pro and how to prepare your body like a pro," Chris Shavers told The Dispatch. "Everything that he told her was next level. There wasn't a lot of wasted time, wasted motion, wasted training. Everything was in game specific training and when she hit the court last summer she really took off and she hasn't stopped."

"Jazz is the best shooter I have ever coached," Terry told The Next in an interview earlier this month. "Her work ethic, leadership and MJ mentality makes her different."

With Terry and Brown furthering her skills in the present, Shavers secured her future when she committed to MSU on June 26. Rated a four-star prospect and the No. 60 player in the 2021 class according to ESPN's HoopGurlz top-100, she's the highest ranked recruit to commit to the Bulldogs since coach Nikki McCray-Penson took over the program in April.

Boasting a relationship that dated back to McCray-Penson's time as the head coach at Old Dominion, MSU's new leading woman will be the next former player to help shape Shavers' game. But beyond her basketball-related endeavors, Shavers noted McCray-Penson's willingness to discuss life beyond the court aided in her comfort with the program -- a sentiment recent commits Madison Hayes, KN'isha Godfrey and Mia Moore all echo.

"That was the big thing that stood out because it wasn't all basketball," Shavers said of her conversations with McCray-Penson. "And that's what you want to have when you're playing under a coach that's on the big stage. If you're down in the dumps, you want to go talk to somebody, at least you have the head coach and the other coaching staff there to go talk to. You know, that they have your back no matter what."

Now heading into the heart of AAU season this summer, Shavers' high school season is shrouded in mystery given the ongoing COVID-19 pandemic. But whether her final season as a prep standout goes off without a hitch or not, the former players that have shaped her past work will be there to maintain her development going forward.

"She's learning from great coaches on the AAU circuit," Chris Shavers said. "And they're all basically preparing her for the next level."