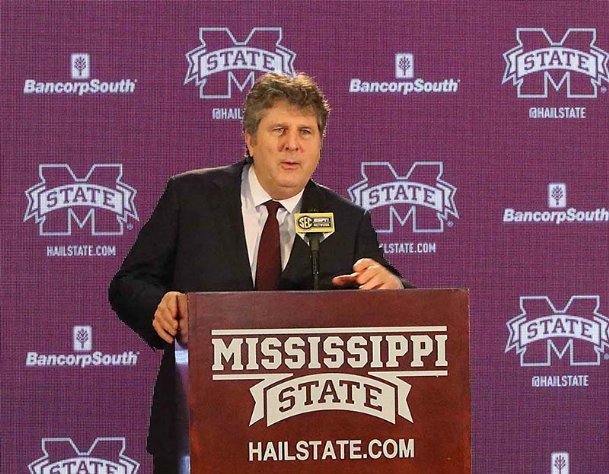 Mike Leach showed off his charisma and sense of humor in spades during his introductory press conference in January when he gave a brief opening statement and fielded questions from reporters. Photo by: Jim Lytle/Special to The Dispatch

STARKVILLE -- Mississippi State has garnered a Sunshine state of mind on the recruiting trail in recent months.

Less than a week after the Bulldogs earned a pledge from three-star linebacker Timar Rogers, MSU now has two players from Florida amongst its 11 commitments in the class of 2021. And while Florida boasts a fertile recruiting ground, it's a state staffers in Starkville have had little success recruiting until recently.

Under Joe Moorhead's tenure at MSU, the Bulldogs never signed more than a single recruit from Florida in either of the 2018 or 2019 classes. The 2020 class, which was largely compiled by Moorhead's staff, boasted one Florida native in three-star defensive end Jamari Stewart, but he was added after Leach took over.

Before Moorhead, Dan Mullen had comparable success in the Sunshine State. Mullen never enrolled more than one Florida player in any of his first seven classes -- including three years in which none were signed. Following the string of success MSU enjoyed between 2014 and 2015, the Bulldogs did bring in five players from Florida between the 2016 and 2017 classes, but that momentum came to a lull after Mullen, ironically, took the head coaching job at Florida.

As for Leach, he signed 11 players from Florida between the 2014 and 2019 classes during his time at Washington State compared to Mullen's eight.

"Get the best ones closest that you can and then extend it out as you have to, but don't ignore real quality guys who are really interested in your program," Leach said of his recruiting philosophy in February. "Sometimes a relative went there, sometimes a guy is just curious, sometimes someone really likes a major there, that type of thing, but no matter where they're at, if they're really interested in you, I don't think you'd ignore them."

Part of the explanation for MSU's recent dip into Florida is the connections on the new coaching staff. Early in his career, Leach recruited the state while an assistant for Hal Mumme at Iowa Wesleyan and later Valdosta State, a Division II school less than a half-hour drive from the Florida border in southern Georgia.

"Georgia can't take everybody in Georgia and Texas, and Texas A&M can't take all the good players in Texas," 247sports Director of Recruiting Steve Wiltfong told The Dispatch in April. "There's so many good players, and if you evaluate well you can really become a good football team recruiting those three states (Georgia, Texas and Florida)."

Boasting a breadth of connections to Florida, MSU's 2021 and 2022 class could have a certain flare for the state. Rogers and high school teammate Myzell Williams out of Deland are already on board amongst the 2021s. MSU has also offered 39 Florida prospects in the 2021 class and another 14 in the class of 2022. By contrast the Bulldogs have offered 21 players from Mississippi in the 2021 class and 10 in 2022.

As for actual prospects who could add to MSU's impending classes, the Bulldogs have been heavily involved with 2022 safety Jaydon Hodge out of Forest High School in Ocala. MSU is also in the running for 2021 offensive guard Kimo Makaneole.

This isn't to say MSU is simply going to abandon recruiting Mississippi and that the Bulldogs will suddenly have an influx of classes comprised exclusively of Florida products. Rather, Leach noted that he and his staff's past stops would allow MSU to recruit more nationally and thus far, that's come to fruition.

"The good news is there's talent everywhere," MSU safeties coach and former Texas recruiting coordinator Jason Washington told The Dispatch in February. "And these kids are getting out and going different places, and so when they step on campus, we want to make this feel like home for them and gain a relationship and a love for our coaches and the players that are around here and the city of Starkville. From there, shoot, sell everything else and give them a goal and a light at the end of the tunnel."