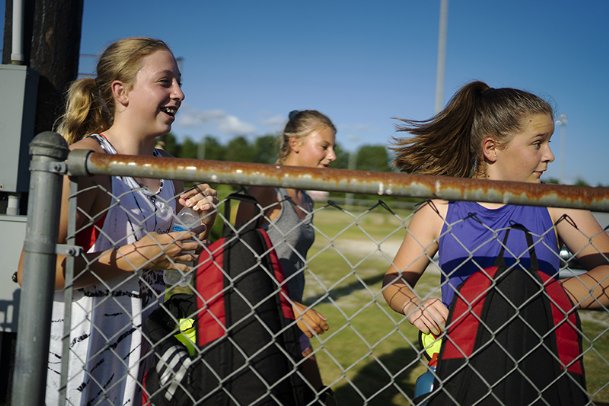 STEENS -- Taylor Tipton knows how much her senior soccer season at Columbus Christian Academy means to her.

She also knows how painful it would be to see it taken away.

"It's like the one thing you want to go out strong in," Tipton said. "Not being able to would be soul-crushing."

If the season were canceled because of the COVID-19 pandemic, it would bring about a feeling similar to the one the Rams had when they were eliminated by Manchester Academy in the MAIS Division III quarterfinals last October. Columbus Christian fought until the Rams' reserves ran thin -- the team played with just one substitute -- and Manchester scored the only two goals of the match in the final five minutes.

The loss was heartbreaking, Tipton said, but it was still history for her and her teammates.

"We were all excited because that was the first time in CCA girls history that we made it that far," she said.

With a plethora of seniors -- first-year coach Mary Margaret Swain and senior defender Olivia Mascarenas both estimated that the roster features eight or nine -- Tipton and the Rams hope to make it even further this fall.

"I think it's going to be a great year," Tipton said. "We've all grown up with each other. We're all ready to get the season started and win some games."

Mascarenas said the Rams are certainly "connected," having gone to school together since they were in third grade and CCA was called Immanuel Christian School. Tipton said that familiarity has bred fluidity on the field.

"It's great because we can trust each other," Tipton said. "We know what our weaknesses and strengths are, and we've built off of each other. I've played with them for three years now, and I know what each of them can do and what they can't."

Swain is still figuring that out after taking over the head coaching job from Jason Barlow in mid-June. The former New Hope standout went on to play at Itawamba Community College, and she wasn't even looking for a coaching job before CCA reached out to hear.

Swain, who coached travel soccer with Columbus United Soccer Club, was happy to get on board, and she's seen the same talent her players have so far.

"I'm looking for it to be a pretty good season," Swain said.

Tipton said Swain has already brought the team together and made its players stronger, and Mascarenas agreed with the sentiment.

"She seems like a really good coach, so I'm excited for this year," Mascarenas said.

She and junior Chloe Harper are set to make a difference as defenders for the Rams, while senior Lily Barlow will hold down the goalkeeper position.

This fall, CCA's schedule includes Kirk Academy, Lee Academy and, for the first time, Magnolia Heights. The Rams will also play Heritage Academy twice, inviting a challenge for Tipton, who's never defeated the Patriots in her high school career.

"That's one team I really want to beat," Tipton said.

Of course, because of the pandemic, that might not happen. Although the MAIS has yet to issue any ruling on the delay or postponement of fall sports, Tipton said she and her senior teammates are all worried they may be deprived of one last season.

But, Tipton said, "(a)s long as we get to play, I think we'll be fine with whatever outcome happens."

She and the Rams are still preparing to take the field together for one last special season.

"We've been through a lot together, and I think this year, it's going to be super hard since it is our last year, but I think that we're going to grow stronger together and finish the season off strong," Tipton said. "I know these ladies, and they are HARD to put down. They are consistent, and I love them."