'It's been really good to be back': Catching up with former Mississippi State standout Brent Rooker on opening day, the offseason and major league training camp 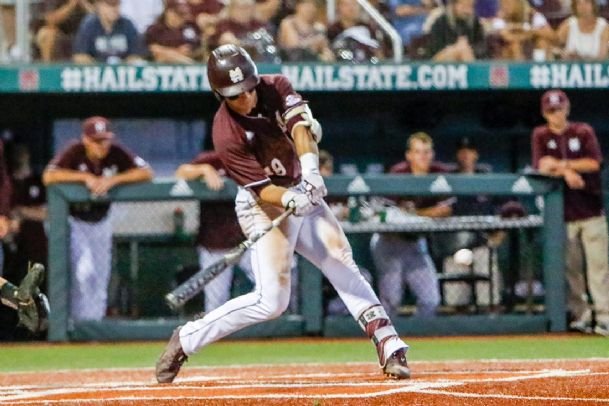 Brent Rooker finished his career at Mississippi State by leading the SEC in RBIs, home runs and batting average. Photo by: Chris McDill/Special to The Dispatch

STARKVILLE -- After concluding his Mississippi State career by becoming the second player in history to lead the Southeastern Conference in batting average, home runs and RBIs, Brent Rooker has climbed the minor league ladder in short order.

In the three years since his final season in Starkville, Rooker has hit a .267 with 54 home runs and 178 RBIs between varying levels of the Minnesota Twins organization. Now entering his fourth professional season, he's among the 60 players in the Twins' 60-player pool ahead of this fall's COVID-19-shortened campaign.

With MLB teams set for Opening Day on Thursday, Rooker caught up with The Dispatch this week to discuss his offseason, training with the Twins and adjustments he's made since last season:

Ben Portnoy: To start off, what have the last couple weeks been like with the MLB getting back going and kind of being in a bubble with everything going on?

Brent Rooker: First of all it's been really good to be back and get to do baseball stuff again. Kind of get back to you know a little bit of a little bit of normalness. So that's been good. As far as the bubble stuff goes, I think the league as a whole, individual teams, are doing a really good job with it. The testing numbers have all been really good. They've gone down I think every time every round of testing we've had so far, so what we're doing is working and I think everyone's even more optimistic now than they were at the beginning that we really are going to get through a whole season.

BP: Last time we talked, we discussed this being a year you wanted to make that jump from the minors to the majors. What's that been like for you and how did you find out you were in the 60-player pool?

BR: So our pro director called me probably on a Saturday or Sunday, I think. We had to be here by Friday, so it was kind of a quick turnaround. But we were all following it and kind of what was going on with negotiations and stuff. So we all kind of knew that we were getting close to being able to get back and get started again. It wasn't a huge surprise but at the same time it was really exciting to kind of hear the news that we get to get back and get back to work.

BP: With that, what's it been like now being in major league training camp and what's the adjustment been like?

BR: Opening day for us is on Friday. (The active MLB Roster) is in Chicago right now, so our taxi squad or player pool, whatever you want to call it, we're still in St. Paul working out. Our job is to just be ready to go whenever we're called upon. With this being a shortened season we kind of know anything can happen and we're all just trying to stay ready to go. Trying to balance getting our work in, trying to work on things, improve while at the same time making sure we're in game shape and we're ready to go given a moment's notice to get that call and go off to the big league club.

BP: You kind of touched on it there, but what's it been like being stuck in limbo, for lack of a better term, being in that extra player pool and what's your experience been like with that?

BR: We've got a really good facility here in St. Paul to do our work. The active roster left to go start their season in Chicago -- we were doing a lot of intersquad stuff with them. Just making sure we're now as prepared as possible for whatever, whenever the need comes up that whoever gets called upon is ready to go and contribute and help the team win games.

BP: What has your offseason been like given all the uncertainty regarding COVID-19 and everything that's come with that?

BR: I treated it just like a normal offseason. Just kind of continuing my workout routine, whatever program that was, as well as hitting, keeping the arm in shape. So I didn't treat it any differently than I do during November, December, January in a normally structured offseason. Just kind of a gradual build up period to make sure you're kind of peaking when it's time to go back and report and get started again.

BP: Where have you been working out this offseason?

BR: Before we came back to camp I was in Nashville the whole time. And then we came back to half of our camp in Minneapolis half of it in St. Paul. We got up here, I guess the last couple days of June, the first couple days July, whenever that was. So I've now been at St. Paul for about three weeks I guess. Before that during the shutdown while all the negotiations were happening, they were trying to figure everything out, I was in Nashville.

BP: You mention maintaining a normal routine, how difficult, if at all, was it to maintain a normal workout routine like you would during a regular offseason?

BR: We had the quarantine period where everything was closed for three or four weeks, whatever that was, and I just spent a bunch of time working out in my garage doing whatever I could do. But that's when thing started opening back up and my workout facility opened back up and I was able to pretty much mirror what a normal offseason routine would be. So it really wasn't much different, which was nice. It made the transition to come back to spring training, or summer camp, just kind of jumping right back into it, pretty easy.

BP: I know space was limited for a while, but what were one or two of the biggest things you worked on during the offseason?

BR: Nothing too specific. I liked the plan that I've had the last few offseasons. I felt good during the past couple seasons. But I performed well, so I just kind of get the same routine going. Obviously kind of looking at some things that happened last year offensively, some things I struggled with, some things I did well and attacking those things whether it be swing changes or adjustment to approach things like that. Maybe doing some more specific hitting drills or what have you to attack certain areas, but nothing crazy, nothing out of the ordinary. Just kind of making sure that I was ready to go for the first spring training and then when we got shut down, just kind of going through that whole routine again, making sure I was ready to show up and compete and continue to improve when I came back for summer camp.

BP: You talked about the hitting, I know your strikeout rate was a little higher than you wanted it to be last year, was that something you simulated or worked at this offseason?

BR: That was a lot of approach stuff. So you can break it down before my first month and then after that I made some adjustments after the first month of triple-A and the 40 games I was healthy after that the strikeout rate when rates went down, the walk rate went up, barrel rate went up. So I think I made a lot of those adjustments that paid off a lot during the season last year and I just kept working on those things.

BP: On that front, with how crazy and uncertain this offseason has been, how encouraging was that to have righted some of those wrongs at the plate toward the tail end of last season?

BR: Yeah, it's nice. I felt really good about the progress and the steps I've made at every level so far. Since being drafted I've, I've been promoted fairly quickly. I've moved up the minor league system and levels pretty rapidly and at every stop, I've kind of struggled in the beginning and I've made adjustments and I've been able to have a lot of success at each level. So that's encouraging for me just kind of knowing that I have the ability to learn and to adjust and to adapt to each level because that's obviously something I'm gonna need moving forward as well.

BP: With climbing the Twins' minor league ladder as quickly as you have, what has that experience been like for you?

BR: It's been fun. Obviously, it's what you want. It's kind of what you want to get into when you get into pro ball. At the same time, it's been a challenge having short adjustment periods at each level, but I think that's been good for me. It's helped me to learn a lot and has put me in a position to hopefully get where I want to be in the near future.

(Note: this interview has been edited for grammatical and formatting purposes)