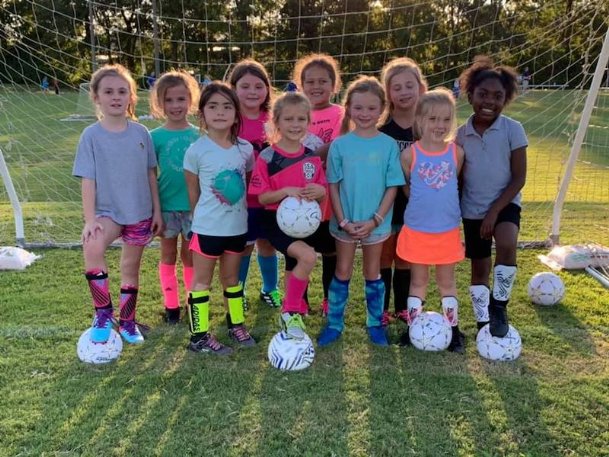 Smiling, the three girls wearing blue and green Impact FC kits face the camera and speak as one.

"We know the secret, but we can't tell you until July 1," they say in the six-second video posted to Twitter on Tuesday. "Shh!"

Except for clips featuring Starkville Mayor Lynn Spruill and Mississippi State women's soccer coach James Armstrong -- each of which runs about a minute -- the videos put out by the Starkville Soccer Association over the past few weeks are just that brief, typically around five seconds in length but sometimes even shorter.

All of them tease an exciting announcement to be revealed by SSA on the same date, and most feature the soccer organization's young players wearing wide smiles as they promise but withhold the big news.

"I think the kids who did the videos really enjoyed it," SSA President Doug Heflin said. "It was fun to see the smiles on their faces as they were doing them. That's just a joy. That's why we do this. Every member on our board is a volunteer. It's all for the kids. Seeing that just brought smiles to all of our faces."

On Wednesday, when the date in question finally came, SSA got to make its big announcement and deliver some more smiles to the soccer community in Starkville.

The organization announced that registration for recreational leagues will be free this season for ages 4-18. Sign-ups began Wednesday and run through Aug. 15.

Heflin said the SSA board made the decision at its meeting near the end of April to alleviate financial pressures on local families by the COVID-19 pandemic.

"With the current situation with the pandemic and the uncertainty of financial situations going forward, the board just felt like this was the right thing to do for the soccer community in Starkville," Heflin said.

Last year, SSA fielded 50 to 55 recreational teams in divisions for under-6, under-8, under-10, under-12 and under-14 boys and girls, and registration cost between $65 and $95 depending on age group. Roughly 450 players signed up for SSA's rec leagues last year, with even more playing on the Impact FC competitive teams.

This year, Heflin said, he expects that number to grow.

"We want every kid in Starkville who wants to play soccer to come out and play," Heflin said.

Heflin said SSA has received guidance from the U.S. Youth Soccer Association and the Mississippi Soccer Association as far as ensuring the organization's players can take the field safely. This summer, SSA has already held tryouts for its competitive teams as well as a couple free clinics.

"We just want kids to get out and come back to some kind of normalcy, whatever that is at this point in time," Heflin said.

Heflin said 50 to 60 kids had already registered by midday Wednesday, mere hours after the registration window opened, showing the excitement of the community to get back on the field.

He also noted the choice to make registration free this year was a "big step" financially and wasn't possible without the organization's sponsors. Next week, Heflin and SSA will talk to previous sponsors and seek new ones, and they're also looking for more coaches with the projected increase in the number of players and teams.

"It's going to be an exciting time for the soccer family in Starkville," Heflin said. "We're excited to do it."

He reiterated the purpose of why SSA does what it does: to bring smiles to its members, whether it's from dangling a secret in a six-second video or dribbling through defenders inside the white lines.

"There's no more joy you can have than to sit out there and see kids running up and down the field: the excitement and the smiles and the joy," Heflin said. "That's what it's about. That is what rec soccer is about: to just give the kids the opportunity to play soccer and get some recreation."

1. Ben's burning questions: What Mississippi State's new schedule forecasts, is a wave of transfers coming and how sportswriters would deal with no football this fall COLLEGE SPORTS