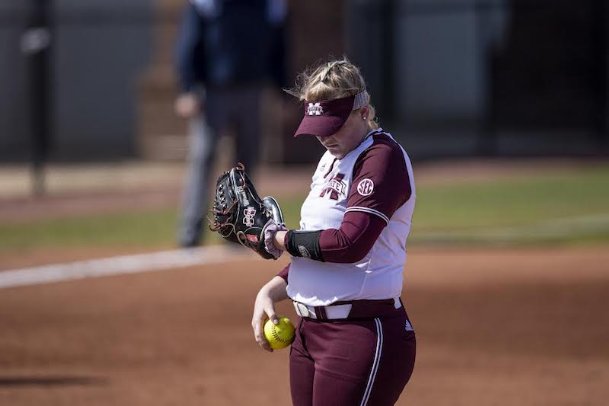 When his two ace pitchers, Emily Williams and Annie Willis, start to tire, they show it in opposite ways. Williams' spin rate decreases while her velocity stays the same; Willis starts losing speed but keeps up her spin.

Knowing those tendencies served Johnson and the Bulldogs well March 8 in the Bulldog Slamboree tournament at Nusz Park in Starkville. With Mississippi State leading Southeast Missouri 2-0, Willis was one out away from a complete-game shutout. Then, with two out in the top of the seventh, she allowed back-to-back singles to put the tying run on base.

Johnson and head coach Samantha Ricketts didn't hesitate. They promptly summoned Williams from the bullpen, a last-minute pitching change that drew some questions even after Williams rebounded from a walk to load the bases by striking out the final batter with high heat to end the game.

"People were like, 'Wow, what did you do that for?'" Johnson said of the switch.

The pitching coach explained that he'd seen the telltale sign: Willis' velocity had begun to fade in the seventh inning. He feared the worst: a three-run home run that could give the Redhawks the lead.

"We try to catch those things before it happens," Johnson said.

The successful move was an apt example of how the Bulldogs' pitching staff has embraced analytics under Ricketts and Johnson, who are both in their first years in their respective roles with the team.

And it goes a lot deeper than noticing a pitcher's declining velocity late in ballgames. This year, Mississippi State coaches used technology to identify pitchers' most effective offering and helped them throw it harder and more often. They used opponents' batting statistics against certain pitchers to determine who should start games and who should close them.

"We didn't try to overcomplicate things, nor did I ask them to do anything outside of their character this year," Johnson said. "All we did was just do what we did better."

The trust he built in his players all fall got results this spring. The Bulldogs' pitching staff went from ranking last or second to last in the Southeastern Conference in nearly every major metric to posting the nation's fourth-best ERA and going 25-3 in the shortened 2020 season.

Ricketts said that's no accident: She has tried to will her team to the forefront of college softball in every aspect, and the Bulldogs' heavy emphasis on analytics played a key role in this year's turnaround.

"If we wanted to get to the top, we had to set ourselves apart," Ricketts said. "That meant doing something different than what we've always done and what most teams do."

At a convention back in 2018, Johnson -- then working as the pitching coach at Ball State -- approached the Rapsodo, Inc., booth and introduced himself to the company rep at the table.

"'You have more pitchers on this machine than anybody else in the country combined,'" Johnson was told. "I thought, 'Well, that's crazy.'"

Johnson first got access to the technology for the Cardinals' softball team in the summer of 2017 -- making Ball State one of the first college softball programs in the country to do so -- and has since mastered it. Now, at Mississippi State, no bullpen session is complete without the Rapsodo unit, which tracks velocity, spin rate, spin efficiency, vertical and horizontal movement and release point. The technology also determines whether a pitch found the strike zone and offers a view of how pitches break as they head toward the plate.

Johnson uses Rapsodo to refine his hurlers' arsenals, help them find their best pitch and work on improving all their offerings alike.

Williams, for example, had always been taught to throw her curveball and screwball for strikes and save her rise ball to get swings and misses out of the zone. But Johnson noticed that the right-hander's rise ball had better backspin than her other two pitches and worked with Williams to throw it more and more.

"Why throw those other pitches in the zone when we can throw her best pitch in the zone more often?" Johnson said.

He has his pitchers show their full arsenal when they come in each fall, then goes over the data with them to make sure they understand it. The more the Bulldogs throw, the better the picture their coaches get -- whether it's a capsule look at one week, one month or a whole fall worth of pitches.

"Having that information really allows the kids to say, 'OK, well, where have I been, and where am I going?" Johnson said.

Not just 'a fancy device'

After the game, Johnson's friend on the Tulsa coaching staff told the Bulldogs coach he was impressed by Loza's outing.

"'That kid was throwing gas,'" the coach told Johnson. "'We could feel that one in the dugout.'"

The fix was relatively simple. When Johnson dove into the numbers, he realized opposing hitters were flailing against Loza in their first time seeing her. But in her second time through the lineup, opponents' on-base plus slugging percentage rose around .500 points, a major jump.

So instead of deploying Loza as a starter, the Bulldogs used her as an opener and a reliever, making sure she never ran into trouble. In that strong outing against Tulsa, she faced exactly nine hitters before being pulled for Williams, who got the last two outs.

"Instead of putting her in a situation where she was set up to fail, we just changed the situation," Johnson said. "This is analytics right here."

It was a reminder that the Bulldogs' embrace of analytics goes beyond Rapsodo cameras and other such technology.

The team's pitching staff saw a 4 mph increase in velocity from the fall to the spring thanks to working with strength and conditioning coach Stephanie Mock in the weight room. Mock helped the Bulldogs become what Johnson called "more efficient movers" without having to overhaul anyone's mechanics.

The tactic showed results right away. Freshman Kenley Hawk, who reached 67 mph in high school, was down to 61 during fall camp, which didn't make sense to Johnson. But she worked away at her velocity, and when she stepped into the circle for the first time in a game, her first three pitches were all clocked at 70.

Other Bulldogs made the necessary adjustments on their own, too. After nearly posting more walks than strikeouts in 2019, Williams knew she had to throw more strikes and issue fewer free passes, and she asked her coaches for help.

Johnson found a simple solution. During bullpens and practices, he simply counted how many of Williams' pitches landed in the strike zone as an easy way to monitor her progress.

As Mississippi State's players saw their numbers broken down for them, they realized that any suggested changes were based in statistical fact and not simply the opinion of Johnson or another coach. That helped the Bulldogs buy in, Ricketts said.

To Johnson, the investment of his players in that culture -- one propagated by them and not by coaches -- was as big a reason as the endorsement of analytics for the team's newfound pitching success.

"The turnaround, to me, is a reflection of, No. 1, a direction of leadership that is more player centric," Johnson said. "It's not about us anymore, and Coach Ricketts leads that charge."

When Ricketts was Vann Stuedeman's hitting coach, the team had a Blast Motion hitting sensor for a few years and got Rapsodo last season. However, Ricketts said, the pitching technology largely went unused.

That's not surprising, according to Johnson: Many schools have the equipment but don't get the most out of it.

"I know that everybody (in the SEC) has got it," Johnson said. "I don't know if everybody's using it."

Part of that, he said, is an inability -- or unwillingness -- to keep up with and manage the various data produced by Rapsodo and other technologies. Last week, Johnson heard from another SEC pitching coach about her frustrations with the Rapsodo system for being slow and not giving her all the data she wanted.

Though he said it's not always a bad thing not to use data -- he leaves his system behind when the team goes on the road -- Johnson said he knows plenty of coaches have yet to embrace it.

"When I see those numbers on Rapsodo, I know what that means," Johnson said. "I think a lot of coaches out there who have dismissed the data side of things feel like it doesn't help them."

It's certainly helped Mississippi State, as Johnson can simply point to his pitchers' success this year in traditional and analytical metrics alike. Williams ranked third nationally in ERA at 0.46, and Willis was ninth at 0.80. D1Softball.com also put Willis 63rd and Williams 88th in its analytics-based ranking of the top 100 pitchers in the nation. The Bulldogs were the only SEC team with two players on the list.

Johnson pointed out that his staff's turnaround is because of more than the team's two aces, noting that Fagan, Loza, Hawk and Aspen Wesley played big roles in the circle this spring.

Overall, he knows Mississippi State's pitchers have embraced the new player-driven, analytical philosophy they've found under Johnson. Recovering from injury this offseason, Williams has taken it upon herself to up her "mental game" -- she's been reading so fast that Johnson has to keep sending her new books to devour.

"As a staff, what we're trying to do is establish a culture of not just player development but player enlightenment," Johnson said.

To Ricketts, that's part of what has put the Bulldogs on the national radar. She said she wants her team to continue using the technology and resources at its disposal to move the game forward.

"It's also just finding those ways to be better," Ricketts said. "Keep pushing the envelope and make other coaches uncomfortable."

1. Ben's burning questions: What Mississippi State's new schedule forecasts, is a wave of transfers coming and how sportswriters would deal with no football this fall COLLEGE SPORTS